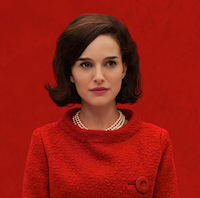 Experience can breed cynicism. When a scene in a movie opens with a half-dressed woman in her room, drinking alone, playing dress-up and swaying to the theme tune of her favourite musical, expectations are there will be a home invasion, assault, or murder any minute. Luckily, this is the fabulous Natalie Portman in the role of Jackie Kennedy, mourning the loss of her handsome husband (played by Caspar Phillipson), the alcohol is champagne, and the music is the theme tune to Camelot. Her presence on the screen for the next 100 minutes will be a constant: alone, taking the lead in conversations, giving the orders.

Jackie, a portrait of Jacqueline Bouvier Kennedy over the course of four days in 1963, between President John F. Kennedy’s assassination and his funeral, is not so much an alternative account of events, but the rarely considered other viewpoint: the woman’s. As both the screenwriter Noah Oppenheim, and director Pablo Larraín are men, it is fair to say this is a man’s interpretation of that viewpoint. Thankfully, it’s far from the clichéd or usual kind. Portman’s performance is definitely Oscar-nomination worthy, the obvious praise going to the spookily accurate accent, as well as her poise, mannerisms and facial gestures – the First Lady to a tee

“The woman is not the object of desire, she is the subject of desire,” Portman suggested in a Radio Times interview published (in print) the week of the film’s UK release. A desire to stand by her man, even and especially in death, ‘tis true, but remaining headstrong and certain about her desires, nonetheless. Her wishes for a televised grand funeral for her husband did not sit well with her brother-in-law Bobby Kennedy (played by Peter Sarsgaard) and their political advisors. She may even have had a little fun knowing that, for once, she had the last word on everything. Showing this element of Jackie Kennedy’s character is one of the fresh perspectives this film offers.

As the film progresses, punctuated by evocative flashbacks of the 1,036 days her husband held office, it becomes clear how much of an instrumental force Jackie was in establishing the JFK legacy. It was her who coined the term “Camelot” (a nod to her aforementioned musical) to describe the idyll, the attainable-for-all utopia the Kennedy dynasty sought to project. She uses the words “legend”, “history”, and “tradition” a lot.

When she and Bobby Kennedy are sat in the hearse, with President Kennedy dead for just 12 hours, Jackie leans forward to ask the driver – who to her represents “the man on the street” – how much he knows about past assassinated US Presidents James Garfield or William McKinley. “Not much”, he confesses. She then asks: “What was President Lincoln famous for?” “He won the Civil War,” the driver replies in an instant. This is what Jackie Kennedy wants for her husband, legendary status similar to Lincoln’s, whose assassination in 1865 fuelled his legacy as a martyr of liberty never to be forgotten. There’s something quite novelistic about the film as the audience is sometimes left to deduce what Jackie is thinking and feeling, rather than always being literally told by the character in her own words. Often the camera holds the gaze on her, and her alone, and the audience becomes narrator: each individual viewer left to their own interpretation and symbolism, and therefore having to take responsibility for whatever cultural conditioning is the subtext of their own life. It makes for bewitching viewing and is a brave move on the part of the filmmakers. Some filmgoers may not be used to a woman being up on the big screen for such lengthy stretches of time or may complain of the film being too slow for their liking.

Portman’s performance is definitely Oscar-nomination worthy, the obvious praise going to the spookily accurate accent, reflecting Jackie’s background of debutante English grammar and Long Island living, as well as her poise, mannerisms and facial gestures – the First Lady to a tee. At the end of the long day that 22 November 1963 turned out to be, Portman is the perfect Jackie Kennedy, in a powerful scene where she makes her way slowly and thoughtfully through the White House towards the presidential bedroom, with her familiar immaculate trend-setting black bob, wearing a pink wool dress suit with dramatic black edging; and the White House is really white, even on the inside. As the scene takes its time, Portman moves closer in and it’s plain to see that her hands are raw from washing, and weak – noticeable as she strokes the grand furniture in passing. Her hair is askew and dusty and the smart two-piece suit is smeared and splattered with blood, dirt and tears. She’s wearing the same outfit she’s had on all day, the same skirt on which her husband’s head rested as she desperately held his brains in, after he’d been shot, suddenly and violently, in public, a whole 1,183 miles away.

Jackie was a woman creating and maintaining her own branding before it was a thing, even if her identity was defined primarily by her role as wife and mother

The film chronicles the pivotal moments mostly via duologue scenes: Jackie and Bobby Kennedy and Jackie and the priest (a fictionalized composite character, played by John Hurt). The scenes between Jackie and White House social secretary Nancy Tuckerman (Greta Gerwig) show love, loyalty, mutual respect and business sense, unsurprising as they were childhood friends and boarding school roommates. Still, it is refreshing to see this relationship emphasised in the movie, particularly because any film set in the early 1960s, especially one recounting the period’s political landscape and the fiercely masculine environment of the Kennedy clan (matriarch Rose, JFK’s mother, notwithstanding) is going to feature a cast with a high ratio of men to women. It’s a touching moment when Nancy promises to stay with Jackie, rather than work with her successor, the curiously named Lady Bird Johnson: “That’s what I do. Nothing has changed,” Nancy says, without a hint of cheese.

The film is held together by scenes in which Jackie is interviewed by Life magazine journalist played by Billy Crudup, credited only as “the journalist”. Not giving a real journalist’s name (it was Theodore H. White) suggests that the actual conversation between the two is not relayed accurately – there’s a wee bit of supposition on the part of the filmmakers. The interview scenes truly show that Jackie was a woman creating and maintaining her own branding before it was a thing, even if her identity was defined primarily by her role as wife and mother. Portman makes the most of some choice lines stressing this point: “I don’t smoke,” she says flatly, lighting yet another cigarette. “But you won’t write that,” is another favourite Jackie statement when she has revealed more than she thinks proper during these conversations. On one hand she’s fully aware of honing an image for herself and the family into which she married; on the other, she uses the argument of “being real” to do it, notably when she refuses to hide her children’s grief from the media.

Even if it’s just coincidence the UK release of Jackie came on the day of President Donald Trump’s inauguration, it’s difficult not to make comparisons between Melania Trump and Jackie Kennedy

Television, albeit stark black-and-white, was the journalistic (and entertainment) breakthrough of the era, and President Kennedy was arguably the first politician to harness the power of the small screen to win high office. The Kennedys were the beautiful people, a new kind of celebrity. Theirs was the administration to first allow the public access, via TV, to the White House. Jackie’s landmark 1962 guided tour for primetime viewers is faithfully recreated, giving Portman an opportunity to shine, while again affirming the fantastic relationship between Jackie and Nancy.

Context is everything. Even if it’s just coincidence the UK release of Jackie came on the day of President Donald Trump’s inauguration, it’s difficult not to make comparisons between Melania Trump and Jackie Kennedy, encouraged by headlines like ‘Melania Trump channels Jackie Kennedy in Ralph Lauren for inauguration day’ and Melania Trump’s own words during the campaign: “I would be a very traditional First Lady – like Betty Ford or Jackie Kennedy. I would support him.”

Near the film’s end, as Jackie leaves the White House for the last time in a chauffeur driven car, cruising the city streets, staring out at other people’s busy, purposeful lives, it dawns on her that the fashion mannequins on display in every department store’s passing shop window look exactly like her. Portman is superb here, looking both pleased and puzzled. Jackie Kennedy was a champion for her husband’s vision and the Kennedy legacy, but in the process she also became a female icon.

Jackie is in UK cinemas now.

First image is taken from the film’s official FB page, two remaining ones from http://www.foxsearchlight.com/jackie/, some rights may be reserved by Fox Searchlight Pictures (used under fair dealing).

Images description:
1. A woman wearing a red suit with a skirt is facing the camera, holding her hands across her lap, looking to the right, against red background only a tone darker than her clothes. Her hair is dark and bob-length, she’s wearing a pearl necklace. It’s Natalie Portman as Jackie Kennedy, re-enacting the iconic look.

2. Black and white; Three people standing in a row in the foreground and more in the background, blurry. In the first row there is a middle-aged white man on the left, wearing a three-piece suit, a white woman in the middle with see-through veil covering her face like in the mourning and a younger dark-haired man on the right. They all look sad and stern.

3. Black and white; a white man and a white woman are sitting at the wooden table facing each other. He has a briefcase at his feet and is looking through some papers on the table in front of him while she is drinking from a china cup. There’s a large bay window behind them making the room really bright.