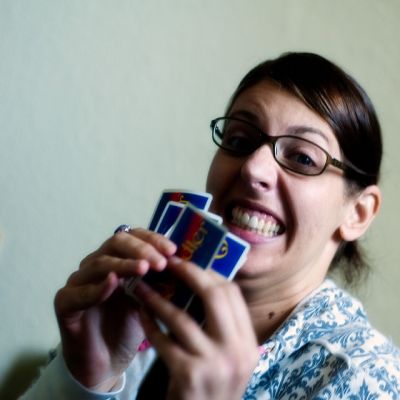 In defence of board games as a feminist pastime Kitty Jansz-Moore is a researcher living in London. She loves board games, opera, podcasts and decorating cakes

My adult love of board games started innocently. A few family rounds of Articulate, The Game Of Life with housemates and nostalgic sessions of Cluedo in coloured outfits.

Then I progressed through the gateway games, getting in deeper: a New Year’s Eve with Cards Against Humanity, an obligatory dabble with Ticket to Ride, my first foray into solo play with Forbidden Island – which was when I realised it might be more than a social habit.

At first I felt ashamed of my new hobby. Geekery had always felt male somehow. Board games seemed linked with computer games, a pastime of gamer-gate Twitterstorms and whispers of dark web misogyny. Where did feminism or femininity fit into any of this?

But now I think of board games as fantastically ‘equal’ spaces.

You sit as yourself at that table. Your decisions are your own, you talk and act as you, or as characters you choose to inhabit (a Mysterium ghost, a FunEmployed applicant). It’s your own voice with your own gender (or lack thereof), race, body and personality.

The board of a game is an equal playing field – sometimes you literally start from the same square as your competitors. There is nothing integrally weighted towards men in the gameplay.

Video games are different because you typically play a stylised avatar with its own version of masculinity or femininity and preset vocal responses, and you can be among the untested attitudes of strangers. It’s not a space everyone feels safe in. With board games you often use genderless meeples (Carcassonne) or genderless cards (Seven Wonders, Jaipur) and compete against friends away from misogyny. Unless you have horrible friends.

As a feminist, I want games to show that women are welcome. If genders are specified then ideally there should be an equal ratio of male and female characters, just like in real life, and the women should be well-rounded. By ‘well-rounded’ I don’t mean ‘big circular breasts’, but with abilities to rival the male characters and job roles beyond ‘nurse’ or ‘victim’.

Luckily there are some fantastic representations of women to be found. The most useful character in Pandemic Legacy is the female quarantine expert. Above and Below and Battlestar Galactica have a good mix of genders. Even Lord of the Rings (that famed sausage fest) dredges up female characters with fully competitive abilities and uses. I have put on a play with an all-female cast in Shakespeare, stolen jewels as a female burglar (Burglar Bros), run around Lovecraftian mansions as a female athlete (Mansions of Madness) and battled against zombies in an apocalyptic winter as a female pilot (Dead of Winter).

It’s not totally there yet though. A 50/50 gender representation in some games would be welcome (for example in the very entertaining but only 25% female Mechs vs Minions). And the bloggers of ‘Shut Up & Sit Down’ recently challenged a developer who admitted they hadn’t noticed or considered the game ratio of 82 men to 0 women in Istanbul. Not all commenters agreed this was a problem.

Similarly, while some games depict a mix of races and a diverse set of characters, others can have colonialist overtones (Archipelago), all-white avatars, or even ambiguous references to slavery (Five Tribes, Puerto Rico). And I’ve yet to see any games that incorporate trans or disabled characters in any way.

But this resurgence of tabletop gaming is still in its infancy, and as more people play and comment and create, we will hopefully get closer to a fully equal and representative space. I’d love to see more female board game developers producing titles, as it’s still a male-dominated field.

In some ways games recapture a past when I felt unaware of any real difference between the sexes; when my brother and I were equal heights and equally dangerous in physical fights. Before puberty came and made it clear exactly who was a girl and who was a boy and what that was supposed to mean. Board games were a neutral place where pink and blue couldn’t segment us.

In fact, recent survey data showed that 40% of women play board games, compared with 32% of men. And it’s not all mums playing happy families with children – among those without kids in the household it still stands at 36% vs 30%.

Sounds like I’m preaching to the choir. Why have board games done so well recently? I’d argue it’s partly because of their equality and a whole hidden swathe of keen women alongside me.