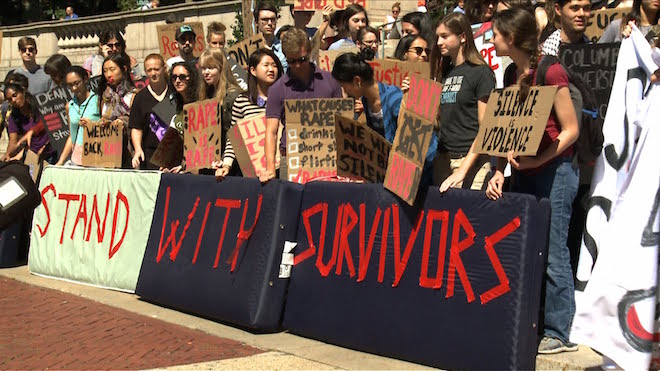 Not every film about rape is a feminist film

This is a guest post by Sophie Mayer, the author of Political Animals: The New Feminist Cinema (IB Tauris, 2015)

There are some excellent films that address rape and remain feminist while doing so. On the Farm (Unclaimed) (2016), directed by Rachel Talalay, tells a composite story based on the lives and deaths of the First Nations women in Vancouver, Canada, murdered by serial killer Robert Pickton. The killer never speaks in the film and the central performance is from Blackfeet/Sami filmmaker Elle-Máijá Tailfeathers as Nikki Taylor, a woman who survived to testify against him. In Esther Rots’ Can Go Through Skin (2009), Mareike is raped and nearly drowned by a pizza delivery man. When he is only given a short sentence, she moves to the countryside to get away from him and fantasizes about violent vengeance; you feel with and for her. Sabiha Sumar’s Silent Waters (2001) works through Pakistani villager Ayesha’s memories, from the present back to the partition of India and Pakistan, and Ayesha’s rape (when a young Sikh woman in India) by a Muslim man who then marries her, converts her and moves her to Pakistan. Long before that, there was Ida Lupino’s bold 1950 drama Outrage: after Ann is assaulted by a street food vendor, both she and the viewer become aware of how many men invade her space in small ways every day. In 1968, Yoko Ono and John Lennon challenged film aesthetics and ethics with the bluntly-titled Rape. In what appears to be a documentary, a cameraman relentlessly pursues a random woman through the streets of London and into her flat.

You’ve probably never heard of those films – but you’ve almost certainly heard of Elle, the new film by Paul Verhoeven that has caused critical controversies and raptures since its premiere last year. Michèle, played by Isabelle Huppert, is raped in her home by a masked intruder, revealed later to be someone she knows, and subsequently pursues a relationship with him. In a thoughtful article, Miriam Bale describes the film as Michèle’s “intellectual examination of her rape and rapist.” Bale’s reading differs from the dominant hot take from Cannes calling the film a “rape comedy,” but agrees with the consensus that the film demands attention. First, because of the performance by Huppert which, Bale argues convincingly, is tantamount to co-authorship; secondly, because it is a serious film about rape.

But serious texts about rape (often about punishing women for being raped) permeate Eurowestern culture. William Shakespeare’s Titus Andronicus may not be the first but might be one of the best known, not least from the 1999 film directed by Julie Taymor but produced by white supremacist Puppetmaster-in-Chief Steve Bannon. It’s only of late that the idea has formed that depicting rape de facto makes a text “feminist,” as doing so busts taboos and tells important truths. This argument names as “feminist” TV detective shows that repeatedly foreground explicit and exploitative images of violated female victims and insist that female detectives are also threatened with rape.

The same logic is at work in most reviews of Elle as a “feminist film”: Michèle, it is said, doesn’t fit the stereotype of a rape survivor.The tortuous argument is that this stereotype is the product of some “feminazi” insistence that sexual violence damages survivors, rather than of patriarchal legal and judicial culture that demands rape survivors follow a “script” in order to be taken seriously and heard in court.

For me, a feminist film about rape is one that – like Silent Waters – address the use of rape as a weapon of war and its slow-burning political and personal consequences. In Can Go Through Skin it is clear that rape is a crime of power and not, as in Elle, a crime passionel and that the so-called justice system can re-traumatise survivors, turning them into victims. There are documentaries such as The Invisible War (rape in the US military) and The Hunting Ground (rape on US college campuses), both by Kirby Dick and Amy Ziering, which address the larger social and political aspects of rape culture, including a lack of access to care, support and justice for survivors. Alas, few feature films are interested in the banal, everyday aspects of sexual violence, which are political and economic and so don’t make for sexy, controversial thrills performed by A-list stars.

It’s time there was a major fiction feature, widely distributed and critically acclaimed for being about the backlog of untested rape kits in the US, or the defunding of domestic violence shelters in the UK, or the increased risk of rape faced by men with disabilities, or police abuse of sex workers. Or even one that – like Ono and Lennon’s Rape – reflects on and makes visible the media’s complicity (including the complicity of film critics) in the framing of rape culture and rape narratives. It’s not enough for a film to be about rape or a rape survivor; it needs to call rape culture to account.

The picture is a still from Dick and Ziering’s documentary The Hunting Ground, used under fair dealing. It shows protest in solidarity with rape survivors, referencing Emma Sulkowicz’s Mattress Performance. Protesters support three mattresses with lettering “Stand With Survivors” and carry placards reading “Rape is rape”, Silence is violence” and similar.