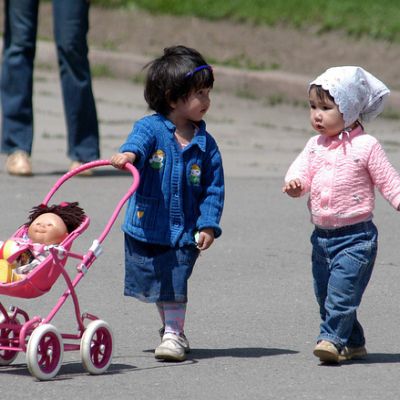 Not long ago my partner and I saw a little girl walking along the road pushing an empty toy buggy and absolutely loving it. It prompted the discussion of whether or not we wanted our daughter to have dollies and prams. Would acting like a mother take away from her childhood? Would playing with baby dolls as a child increase the likelihood of her getting pregnant in her teens? Would we be promoting traditional gender roles instead of getting her a toy car as a rebellion against the pink/blue divide?

But the question that intrigued us most was: why do lots of little girls want to play with prams?

The simple answer is that young children want to do most things they see their parents doing. They see mum or dad pushing the stroller and they want to do it too.

Then there’s advertising. When I think about my own childhood, I remember the many adverts for dolls on TV, and embarrassingly can even sing the tune for ‘Baby Wee Wee’. Girls fed and dressed dolls while boys zoomed toy cars around tracks and blasted things with their Power Rangers. My younger brother didn’t play with a baby doll or a pushchair.

But these factors aside, is it possible that young girls are just interested in babies?

Recently at the library we met a little girl who was totally besotted with our daughter, who is five months old. The girl, who we guessed was about four years old, kept coming over with books for our baby, holding her hand and stroking her head. Her mum looked at us apologetically and said: “She loves babies!”

Another example is my cousin from Hong Kong – she’s five. When she came over for Christmas last year, she told us she has ten babies and proceeded to pretend to breastfeed them!

Is there anything inherently wrong with little girls liking babies or being encouraged to play with them?

Our concern was that this would make our daughter want to grow up too fast. That she might rush towards relationships, a house and marriage without much consideration of the alternatives. But as a proud mum, am I saying that motherhood is an unreasonable ambition? Of course not. In fact I strongly believe that the role of parent, especially the stay-at-home mum, deserves more positive recognition. And why should it be a bad thing to raise our children to be nurturing and kind to others?

The real danger is that we aren’t acknowledging little boys who want to play this role, or showing them that this is an option. Children’s toys are so incredibly gender-specific. Why are boys not encouraged to play with baby dolls? When shopping with our little girl we need to be conscious of the overwhelming pink and blue aisles. It is important we enable our children to choose freely and support their interests even if these fly in the face of typical ideas about gender.

I know that seeing me pushing the pram or doing laundry will make my daughter want to do those things. But she will also see me playing basketball, gardening and doing DIY. She will know that pushing prams and washing clothes isn’t the definition of being a mum. And that being a mum doesn’t define me.

Ultimately I believe that playing parent teaches children about responsibility, empathy and caring for others, which can only be a good thing for society. So if my daughter chooses to push an empty pushchair around the shop or pretend to change nappies then that’s fine by me.

Image depicts two little girls, one of whom is pushing a pink pram with a doll in it, courtesy Maxim Zolotukhin / World Bank