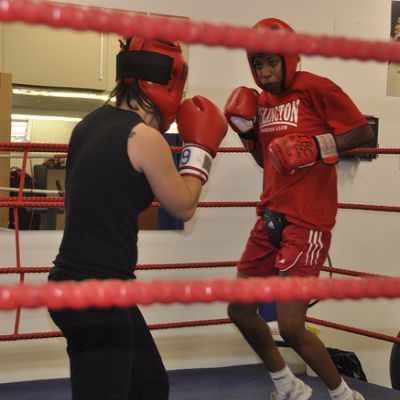 He said, she said: the misogyny of the casual pronoun This is a guest post by Beth Leslie. A full-time writer and adoptee Londoner, Beth can usually be found debating politics in quirky bars designed to look like laundromats. You can follow her on Twitter @bethanygrace92

A CEO and a secretary walk into an office. She picks up a file, and he takes a seat. Picture the scene, then riddle me this: is it the secretary or the CEO who is currently standing up holding the document?

The answer is that it’s impossible to tell with the information provided. We know the woman isn’t seated, but not what her job title is. Those who thought they knew probably made an assumption based on the only fact they had: her gender. A quick straw poll of my nearest and dearest reveals the unsurprising – people were far more likely to assume the woman was the secretary than the CEO.

Confession time: I did exactly the same thing.

Not with the above example, admittedly, but with this riddle about how a boxer can win a match where ‘no man throws a punch’. I consider myself a fully paid-up member of the feminist club. I constantly push back against latent sexism from friends and family. But when it came to envisioning a female pugilist, I fell shockingly short.

Perhaps I’m just a bad feminist. Or perhaps such gendered assumptions have become so ingrained in our collective psyche by patriarchy that we all cannot help but occasionally be susceptible to them.

I doubt many of us would have to think hard to recall a real-life instance of gender-assumption. My particular bugbear was being mistaken for a male colleague’s PA if I answered the phone in his absence. My partner recently offered to introduce a client to the (female) director, only to have the client respond that they’d be delighted to meet ‘him’. And my best friend, an economics editor, is constantly dealing with confused writers who assume she must be a man.

Yet most of these assumers are not explicit sexists. The Fawcett Society has found that over two-thirds of Brits support gender equality in principal, and consequently I doubt many of them believe that women could or should not be executives, directors and economists. So what’s going on?

Psychologists talk about something called ‘adaptive unconscious’; the part of our brain that makes decisions or snap judgements without our conscious mind being aware that it is doing so. The adaptive unconscious is actually pretty useful from an evolutionary point of view (it’s the process that underpins Malcolm Gladwell’s famous book Blink), but it also has a nasty habit of reacting off any innate prejudices, including those we may not even realise we have.

For as long as the society we grow up in is inherently patriarchal, the adaptive unconscious means that even the most enlightened of us have to make a deliberate, concerted effort to reassign our assumptions about men and women. Unfortunately, effort is something that humans tend not to be fond of. So whenever we’re tired, or in a hurry, or distracted, or under pressure, we find ourselves falling back on the same stereotypes.

For me, a writer and self-confessed logophile, the obvious focal point in this phenomenon is gendered pronouns. When these come into play, everything from occupations to personality traits becomes assigned to a male or female subject.

In an equal world this wouldn’t matter, because the distribution would be roughly even. But in an unequal world like ours, the male/female assignment is so strongly skewed to one gender that we begin to see the two words, and therefore concepts, as inextricably linked. I write careers advice for a living, and I can tell you that phrases such as ‘he was the receptionist’ have come to sound so incongruous that some editors have kindly ‘corrected’ them for me.

To the Richard Dawkins of this world, the gender assigned to a hypothetical administrator may seem relatively unimportant. But, as anyone who has watched a Derren Brown show knows, human beings are highly susceptible to the power of suggestion. If you are a woman who sees over and over and over again that powerful people are male, you start to believe that power is beyond your grasp, as this article from TIME shows: “[Millennials] are fame-obsessed: three times as many middle school girls want to grow up to be a personal assistant to a famous person as want to be a Senator… four times as many would pick the assistant job over CEO of a major corporation”.

The fact that TIME didn’t even notice that these ‘fame-obsessed’ girls didn’t aspire to be the famous person, but only their assistant, points to the second danger of implicit sexism: its implicitness. Calling a female director ‘sir’ or using a picture of a woman to depict an assistant seems so minor, so insignificant, that it slips under the radar. But, like all microaggressions, it adds up.

Indeed, innate assumptions about gender are the very foundations upon which patriarchy is built. Without ripping them out completely, we cannot plant a fairer and more equal society in its place.