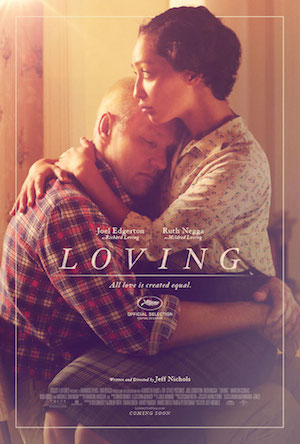 The power of a loving couple It all starts with an announcement: “I’m pregnant”. There is no fanfare, crying or cheering, just a small smile and a quiet “Good”. The reason for this restraint? The conceived child is technically illegal in the American state of Virginia.

Loving explores the real-life relationship of a black woman and a white man, Mildred Loving (Ruth Negga) and Richard Loving (Joel Edgerton), who travelled from Virginia to Washington DC in 1958 to get married. Interracial matrimony was illegal in their home state. They spent most of their lives entangled in a legal battle to live together in Virginia.

What makes this film different from recent dramatic and powerful films on civil rights (Selma and The Butler are obligatory viewing) is the fact that the Lovings did not want to be activists, start demonstrations in the streets or be at the centre of a nationwide scandal; they simply wanted a quiet life in the countryside. Director Jeff Nichols does extremely well expressing this intent, maintaining sincere tenderness and restraint in his poignant portrayal of the real couple’s story.

Loving serves as an important reminder that while some laws have changed, the institutional racism that supports those laws endures and still needs to be fought against

Loving carries with it a quiet determination, rejecting sensationalism to show instead the family dynamic of the Lovings and their cautious climb to the United States Supreme Court. The civil rights movement of the time, while acknowledged, is kept intentionally at arm’s length. Imagery is subtle throughout, with a motif of Richard – a bricklayer – building various walls that never get taller, a moving metaphor for the couple’s seemingly fruitless battle to live in their own home. This quiet, personal quality serves the story well. However, the film feels slightly held-back in parts and I would have loved to see a little more of the wider context of the civil rights struggles and politics of the time.

While I enjoyed the film’s slower pace, I feel it lacked a sense of urgency in pivotal scenes, particularly at the point of the couple’s arrest. Mildred, then pregnant, is shown to be manhandled and badly treated as she is thrown in prison, an unsettling show of police brutality that still plagues the US, and indeed the world, today. In my opinion, although acted beautifully by Negga and Edgerton alike, the scene lacked a sense of outrage and was a little slow given what it depicted. One scene struck a particularly unnerving chord with me. Upon Richard’s release from jail it is revealed that he is not allowed to post Mildred’s bail: she must wait for her father to bail her out. This injustice made me recall parts of Ava DuVernay’s Oscar-nominated documentary 13th which concerns the rights of black people in the US today and frames the fact that they are disproportionately jailed as a form of modern slavery.

The issue of it being harder for black people to post bail is discussed in DuVernay’s film as a problem plaguing the American justice system today, affecting POC who are often forced to reject bail due to costs or even reject a fair trial for a plea deal due to horrifically long minimum sentences for drug crimes. This is something that black Americans are far more likely to be imprisoned for than white Americans. According to some reports, 95-97% of prisoners in the US, mostly POC, never receive a trial. Loving serves as an important reminder that while some laws have changed, the institutional racism that supported those laws endures and still needs to be fought against.

Giving a platform to women’s stories, particularly those of black women, is vital at a time in which women’s rights are under fire both in the US and worldwide

As well as throwing a spotlight on current racial injustices, Loving also reminds the audience that the world is currently going through similar struggles in terms of LGBT marriage. Mildred Loving herself publicly gave her support for same-sex marriage shortly before she died in 2008, saying: “I believe all Americans, no matter their race, no matter their sex, no matter their sexual orientation, should have that same freedom to marry.” As same-sex marriage is only legal in 21 countries (including all American states), we should feel ashamed to think Loving primarily concerns a historical problem.

Mildred Loving addressed the public in this way several times in her life and was more active than Richard in taking the case to court and speaking publicly, an aspect of their story that the director does not shy away from. Mildred is shown in the movie as having a lot of agency in terms of the court case and her gentle wisdom is seen as powerful in the face of the press. Before the famous Supreme Court trial, Mildred shares a hopeful smile with TIME photographer Grey Villet and simply says: “We may lose the small battles but win the big war.”

Giving a platform to women’s stories, particularly those of black women, is vital at a time in which women’s rights are under fire both in the US and worldwide, and Negga (the first black woman to be nominated for Best Actress in the Academy Awards since 2012) does a stunning job portraying Mildred’s quiet strength and agency.

Because of the film’s modern significance and the fact that it is such an enduring story, I would have loved more of the politics and details of the law and trial to be presented; the intimacy and personal focus was lovely but somewhat unsatisfying. Bernie Cohen (Nick Kroll), the lawyer who fights for the couple’s case, played a huge role in overturning the archaic law and I think the film would have benefitted from giving more screen time to him and to the nuts and bolts of the court case to explore the nationwide significance of the law’s appeal.

Despite this, and a slight lag in pace and intensity at points, the film really did highlight a pivotal moment in history; a moment in which one couple quietly but decisively demanded their fundamental rights. Loving is a sincere and determined film that can teach us enduring lessons on fighting for civil rights today. The film shows a fierceness in Negga’s performance and the Loving family’s inspiring court case while still maintaining a very watchable sentimentality. It is a genuine and relevant movie that deserves to be in a spotlight in 2017.

Both images taken from the film’s official UK website, used under fair dealing.

1. Black woman and white man are sitting next to each other, the man is wrapping his arm around the woman and she’s holding his forearm. They both look to the side and seem very happy, the woman is smiling.

2. A night scene outside the house, two white men are leading white man and black woman. They are probably both policemen, one of them is wearing uniform, the other plain clothes. Two captives might have been taken out of bed as the woman is wearing a blue night robe and the man white t-shirt and casual trousers.