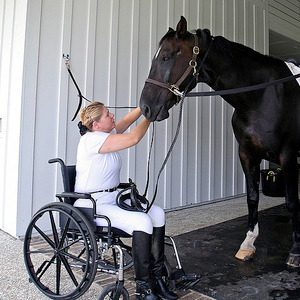 Three years ago, Philippa Willitts looked at how The F-Word might appear to disabled people who aren’t familiar with the site. She focused on instances of disablist language and the visual representation of disabled people in the images we use. This internal review highlighted the urgent issues we needed to address and prompted us to start a disablism working group to help us take action. The following year, we summarised the review results on the site and outlined what we had been doing and what we would be investigating over time to help us achieve our goals. Last October, Megan Stodel conducted another internal disablism review to track our progress in this area. Some of the results indicated we had improved (e.g. in terms of editorially intercepting and challenging lazy, outdated disablist terms such as the use of ‘crazy’ and ‘insane’ to describe something being viewed negatively). However, a key area where we clearly had – and still have – a long way to go was in our use of images of disabled people.

Megan’s picture review focused on visible impairments, which do not represent all types of disability, but nonetheless provided a visual cue in terms of how welcoming The F-Word is to disabled people who do not already run, write for or read the site.

As with the original review, Megan only included photos (not cartoons or illustrations) and only counted people whose faces were visible. Along with this, she applied the following exclusions:

…There were frequent instances where [representation of disability] was not entirely clear, particularly in large crowds (I counted people if I could make out any of their facial features, but not indistinct faces blurred in the distance) or if faces were partially or almost entirely turned away. If I was uncertain, I included the images in the analysis. However, a repeat study might find slightly different numbers.

For context, in the UK, an estimated 1.9% of the population use wheelchairs. This is just one way in which it might be visible that somebody is living with a disability. However, even this shows us that the site underrepresents people with visible impairments.

This means we still need to do better. However, we’ve been struggling to find a good selection of pictures featuring visibly disabled people in connection to a variety of topics through the usual avenues of free stock pictures and Creative Commons searches via Flickr, Wikimedia and Google. In our commitment to actively seek out images of disabled people, this has led us to take steps to build our own resource.

For this purpose, we have created an invitation-only Flickr group for F-Word readers and contributors to share their own photos or illustrations featuring under-represented groups, with a particular focus on images of and by disabled people. As previously discussed, one of the problems of diverse representation within stock images is that women with marginalised bodies have reasons to fear putting images of themselves up for use in any context. We’d like to create a safer space where that can happen.

A few caveats for participating photographers/artists:

Depending on team resources, we may also end up expanding the group to include a chat/message facility where we would post a description of an image we need and the deadline so that members can add an image to fit this (or email one to the editor in question).

Please note that, while we are focusing on images of disabled people in this call-out (due to this being the area most in need of improvement), we also welcome images of people from other underrepresented marginalised groups.

The photo is by Mary Austin and is used under a Creative Commons licence. It shows a woman, Kim Jones, dressed in riding clothes and boots and using a wheelchair, attaching the bridle of a horse, Star.