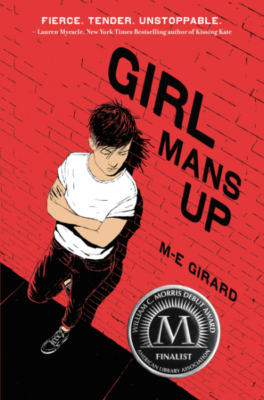 The problem with ‘manning up’ What was the last Young Adult (YA) book you read with a butch lesbian protagonist? Struggling? If so, you’re in excellent company. Despite the genre being a pioneer of stories featuring gay and genderqueer/trans narratives, Girl Mans Up is the missing link in the YA LGBTQ+ canon. And, thank goodness.

M-E Girard’s debut novel concerns Pen (short for Penelope), a 16-year-old, second generation Portuguese “dude” (her words) living with her conservative parents and older brother, Johnny, in Toronto. She’s into video games, hanging out with her friends and, later, Blake, a classmate and singer in a local band.

A key element of the novel involves Pen’s butch gender presentation and emerging lesbian identity. Overall, the focus here is on other people’s responses to this, both good and bad, rather than her own turmoil. Although she’s still figuring out the finer points of her identity, it’s really heartening to read about a queer protagonist who is primarily happy with themself, rather than being wracked with self-loathing and shame. This is no mean feat, as Pen’s parents are not supportive of her gender presentation and unwillingness to conform to traditional ideas of femininity. The book also serves as a sobering reminder that unfortunately not all parents and guardians of LGBTQ+ kids are able to accept them for who they are.

Ever since I started swiping clothes from my brother Johnny’s closet, people have been reacting differently to me. I used to wear jeans and plain T-shirts and I’ve always hung around guys, so people just figured I was a tomboy, but now it’s like it goes beyond that, and I’m sure it’s not just because Johnny’s clothes are name brand and sweet as hell. I don’t really know what people think I am, or what they think I’m not

It seems that Girard either has an excellent memory or a good understanding of teenage life, as she astutely describes many of the challenges teenagers (and adults!) face

Not only is the book compelling and thought-provoking, its main strength lies in its authenticity. It seems that Girard either has an excellent memory or a good understanding of teenage life, as she astutely describes many of the challenges teenagers (and adults!) face, such as navigating relationships – both romantic and platonic – and learning to become your own person, realistically and sensitively.

One relationship that proves particularly testing for Pen is with her best friend, Colby: “Colby’s the good-looking one with the screw-off attitude, which means all the guys know him and all the girls want him, so he gets to call the shots.” Although they’ve been friends for some time, Colby isn’t as respectful towards Pen and their other friend, Tristan, as one might hope. The boy’s in possession of some hefty male entitlement and privilege and frequently makes sexist and demeaning remarks in Pen’s presence and, occasionally, directly at her. At one point, he talks about being “over” girls and about how “they think they can trap me. I swear, Pen, there are times I’d punch a girl if I was allowed…girls are evil, dude. They try to change you, turn you into a pussy.”

He also uses Pen as ‘bait’ to “hook” girls in. This involves Pen initiating conversation with them, before Colby moves in to take over and seduce them. While this behaviour isn’t that unusual amongst teenagers, Colby’s worldview and distorted ideas around consent make this difficult to digest.

To a greater or lesser extent, I expect most readers can relate to the situation of having a friend who behaves badly, whilst we look the other way. Although Pen is “one of the dudes”, an uncomfortable tension arises when she’s pressured to lie in order for Colby to get what he wants. Girard handles this expertly and realistically, however, and the reader is reminded of the familiar complexities and contradictions of human relations.

What I found disappointing about Girl Mans Up, however, is the lack of critical examination of the sexist language which Pen reproduces

Growing up butch and primarily spending time with boys, who are also navigating their own way and learning about what it means to be “a man”, means that Pen is, unfortunately, witness and subject to many sexist and reductive attitudes and comments from those around her. These include being asked if it’s her “time of the month”, being called a “girl” or a “pussy” in a disparaging way and, when drinking alcohol with her peers, being told that she can drink the fruity wine “because it’s pink”.

As a big video games fan, Pen also makes some astute observations about the sexism within gaming culture:

Like last month, when he was going off about how I should’ve picked the girl character in Slashko, when meanwhile it’s not even a question that none of them would ever pick her – even for her better default weapons. I pick the guy characters because they never make girl characters that look like me. They make them hot, half-naked, and full of makeup – which is nice to look at, but it’s not me

I hate gaming online because of all the bull these dudes throw at me – like saying nasty sex stuff over headsets, or talking crap about my gameplay, or just booting me out when they find out I’m a girl

Although women now constitute a majority in the world of gaming, this only services to reinforce what we already know about gaming and is something that many women gamers can undoubtedly relate to.

What I found disappointing about Girl Mans Up, however, is the lack of critical examination of the sexist language which Pen reproduces. Granted, the book title is a pithy play on words, but I had hoped that the book would unpick and challenge much of the sexist language that has fallen into common usage and that occurs throughout the novel. On the contrary, Pen only regurgitates this and uses sexist terms such as the derogatory “pussy” and “manning up” to describe her friend being courageous. Language is the means by which we understand each other; there is no room for suggestions that these are ‘only words’. Certain words have great significance and ramifications, particularly for marginalised groups, and it rankles when Pen, an individual with intersecting marginal identities, reproduces sexist language to refer to another girl.

This continued aping of patriarchal ideas of what constitutes strength and weakness is disappointing, but not necessarily inaccurate, particularly for someone who is trying to navigate their identity

In one scene, Pen is digging up the back yard and makes the following statement, which implicitly associates the concept of caring about something with being weak:

There are worms and snails under there and I kind of feel like crap for destroying their home and murdering them. I wonder about picking them out and bringing them to the other side of the yard, but then I think about how only a pussy would be sitting here thinking about picking bugs out of the ground to save them

There’s more machismo later in the book, in a scene with her brother:

“So what are you doing tonight?” “Well after this, we’re hitting the weights. I think I’m ready to start with the ten-pounds. Five-pound weights are sort of pathetic,” I say

This continued aping of patriarchal ideas of what constitutes strength and weakness are disappointing, but not necessarily inaccurate, particularly for someone who is trying to navigate their identity as, “…not a boy, but I don’t want to be that girl either. I just want everyone to screw off and let me do my own thing for once.”

Towards the end of the book, Pen’s friend, Olivia, is talking about kissing her new boyfriend. She’s excited and it’s the kind of thing that you might want to share with a friend. Pen shuts this down immediately, however, with the following remark: “She does her girly little smile that makes me roll my eyes every time. ‘No. Ew. No girl talk. I said no girl talk! Come on.’” Why does talking about your partner have to constitute ‘girl talk’? Why is this even gendered, when Pen talks about how gender shouldn’t matter?

It’s true that Pen is only 16-years-old and still making sense of the world and her position in it. In this sense, she isn’t a perfect protagonist, despite a small part of me desperately wanting her to be. Much has been written about the impossible burden people from minority groups often experience in terms of representing an entire group in a positive way or in a way that satisfies everyone. As humans, we’re fallible and I appreciate that such a demand is neither reasonable nor realistic.

I also think it’s important to acknowledge the reality of internalised misogyny, especially when, as in Pen’s situation, you are explicitly surrounded by this. It’s also possible that the book forms part of a wider commentary about internalised misogyny within the queer community and the mimicking of toxic masculinity by some of its members. Kate at Autostraddle writes a great piece exploring these issues. Despite this, Pen’s developing romantic relationship is completely adorable, with more respect and boundaries than many of the adult relationships I know of.

Pen is an exciting and nuanced character and Girl Mans Up is a welcome addition to the world of YA queer fiction. It’s a great read that would appeal to a range of readers, not just older teenagers or LGBTQ+ folks. In my view, a more critical examination of internalised misogyny would have been welcome and beneficial for many readers, but this didn’t detract from my overall enjoyment of the book. For teenagers that identify as butch or who are exploring their sexual identity, Girl Mans Up could well be a godsend.

Girl Mans Up is published by Harper Collins and is available to purchase here.

The image shows the book cover. It shows a person with short, dark tousled hair wearing a white t-shirt, black jeans and sneakers leaning against a red brick wall, standing on a black floor. They have their arms crossed and are looking to the bottom right-hand corner of the cover. At the top of the cover is a quote from Lauren Myracle saying that the book is “FIERCE. TENDER. UNSTOPPABLE” in white, capitalised font. The text below this reads “GIRL MANS UP” in capitals in black font on the brick wall beyond the person. The author’s name, “M-E GIRARD”, is below this in smaller font.