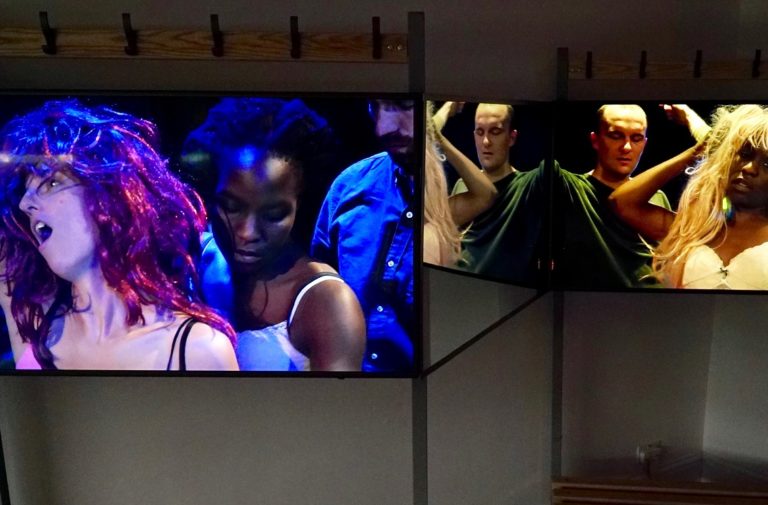 Virgin Territory is a digital installation showing at the ONCA gallery in Brighton as part of the Brighton Festival. Created from Vincent Dance Theatre’s live dance production of the same name in 2016, Virgin Territory takes place in two spaces in the gallery, with most of the work being shown on four large screens in the main space that loop every hour.

The screens are each mounted on different sections of the main space, which is made to resemble a school changing room. There are pegs above them and below lie cubby holes filled with plimsolls, blonde wigs and net fabric. There are wooden chairs that are typical of a classroom at one end of the room for visitors to sit on and blackboards with the hashtags particular to the piece written on them. It’s not a quiet space. Visitors often come in and out while passers by peer into the gallery from the street. There is a fair amount of pink.

Sometimes a different piece of film will play on each screen; sometimes one, two, three or four screens will show the same thing. There is a variety of films: the dancers could be in a studio space performing the choreography, or in another moment dancing outside in the streets and alleyways. There are short clips of people walking down the street and at times the performers will look directly into the camera, repeating verbatim the words of interviewees being fed into their ears through headphones. Throughout, there is a soundtrack from Jules Maxwell which includes the performers’ words, disturbing recorded interviews, barking dogs and varied music including an instrumental version of Teenage Kicks, sombre piano playing and choral songs.

It’s a very serious, meditative work. Although there is a lot to look at, repetition of the imagery on the screens allows the main themes of the piece time to hit home.

With Virgin Territory director and designer Charlotte Vincent wants to look at the impact of digital culture on girls and young women, and what she sees appears to be unrelentingly negative. A girl in school uniform stands alone in an alleyway looking nervous; a woman is thrown to the ground and photographed; a jovial morris dance in a park suddenly becomes a fist fight; a man and woman dance as if they are drunk and want to get off with each other until the scene turns dark and he forces himself on her. In Virgin Territory danger is everywhere and girls are never safe.

This is, of course, completely fine as a viewpoint. The world can be a dangerous place for women and girls and the online space does give new ways for people to be exploited. It is a new platform for sexualised imagery of women. With Virgin Territory however I feel that the symptom is being criticised rather than the cause.

Some people have always preyed on children, while women are objectified in our society across many platforms. To counter this I believe we need to change the behaviours, not the medium.

An older woman I know who was raped as a child might have been able to find solace in reaching out to others online if only the internet had existed in the 1950s. Instead she felt alone, not knowing that her experience was not unique. The internet isn’t just full of men grooming young girls — there’s also the possibility of finding like-minded communities and organising resistance. Plus, the much-maligned selfie is extremely valuable to lots of people.

It also wasn’t that long ago that video games were seen as a danger to young people and before that it was music. A change to a digital world is real and irreversible, but I don’t see the same inherent danger within it as is demonstrated in this piece. That’s not to say that there isn’t a lot to admire in Virgin Territory. The films are beautifully made and shot by cinematographer and editor Bosie Vincent and the layering of the images across the four screens is skilfully done. I really like the choreography and would like to see more of it mixed in with the other shots. The movement is dynamic and natural, some of it inspired by street fighting and sex as depicted in pornography.

In general, the eight performers — four adults, four children — are excellent, with expressive faces and movement. The only moment that is something of a let down is when one of the men speaks as if he is watching a young girl online (“I’m following you”, “Silly girl”, “Giving it all away.”) Unfortunately, he just isn’t a very good actor so this section feels wooden rather than sinister. Apart from this all the sections are committed and convincing; the performers are charismatic and easily hold my attention.

On the lower level of the gallery the installation continues with a shorter film playing on one screen. This space smells of earth, has leaves on the floor and bunting on the wall, and has a slightly more positive feeling than the room above. The film shows the performers planting seeds in a field and at one point one of the girls actually smiles.

There is a chance to interact with the piece here. Visitors can write suggestions for what we can do to counteract the negative effects of digital culture or label a plant pot with the name of someone who inspires us. There is also an online engagement campaign with visitors encouraged to connect on Twitter and Instagram and share their responses with the hashtags #VTerritory and #VDTEverydayAction.

Virgin Territory is clear about its intent and makes its point clearly with a coherent design and quality performances. Its politics do not quite align with my own, but that doesn’t mean that the questions it’s asking shouldn’t be asked. The digital space has its own challenges and opportunities, and leaving young people to navigate it on their own is surely not a good idea. In Virgin Territory, Vincent Dance Theatre have created a powerful piece of work which responds directly to contemporary culture.

Virgin Territory is at the ONCA gallery until Sunday 21 May. The installation is open from 12 midday to 6pm each day. An audio transcription of the piece is available on entrance to the gallery.

Both images are courtesy of Vincent Dance Theatre and are credited to Bosie Vincent.

The first image is a shot of the installation. Two screens can be seen mounted beneath rows of coat hooks. The screens are lit up and the rest of the photograph is relatively shaded. On the left hand screen three figures can be seen, two women are in the centre of the screen dancing. One wears a wig, has her mouth open and is holding her arm in the air. The other woman is behind her and looking down. Both can be seen from the shoulders up. A man can be glimpsed behind them. The whole screen has a blue-ish tinge. On the right hand screen there is a similar shot but this has more natural colours. In the centre there is a woman who can be seen from the shoulders up wearing a blonde wig. Her right hand is raised to her head. Behind her on either side is a man, both also look as if they’re dancing. The screens are in a zigzag formation, so the right hand screen is a little further back than the left. Between the screens is a mirror that we look at at a very acute angle. In this mirror there is a reflection of the right hand screen.

The second image is of a tree branch in front of a white wall. Hanging off the branch are lots of brown luggage labels that have messages written on them including: “Honour my body for what it can do, not what it can’t!” and “Valuing the women I know for more than the way they look.”