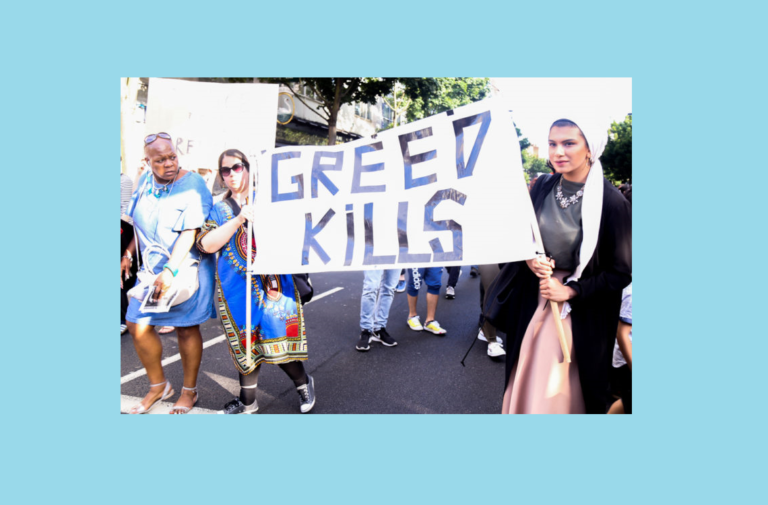 Grenfell Tower is about race and class

Grenfell Tower has become a symbol of systemic, institutional and structural inequality. It represents the ignored, the marginalised, the vilified, the misrepresented, the misunderstood and those who are too often the victims of discrimination and prejudice. The victims of this horrifying disaster are a direct legacy of a political system, fuelled by a right-wing media, bent on stirring up division and hate, which has, for too long, dehumanised and disregarded vast swathes of our society.

Under the Tories’ leadership, cuts to public services have been unprecedented, disproportionately affecting the poorest and most vulnerable in our communities. The housing crisis has reached a critical epoch, particularly in London, where social cleansing, under the guise of ‘urban regeneration’ is removing established social housing tenants from their homes in order to sell these on to private companies. Profit is being placed before people and an elite minority are benefiting to the detriment of a significant majority.

The staggering disregard for certain lives is embodied in Grenfell Tower. Some effort has been made to address safety measures for council houses and privately rented properties, however. According to Channel 4, “Labour have put two pieces of legislation before Parliament on this issue since 2015”. Last year’s attempt was defeated, with all 309 Tory MPs in attendance voting against this. This is unsurprising when you consider that a staggering 39% of Tory MPs top up their income as private landlords, renting out at least one property. As Dawn Foster correctly asserts in The Guardian, this matters because “it means that housing legislation is being formed by people with little personal connection to the housing crisis”.

When you look at the names and faces of the “missing” people from Grenfell Tower, it’s clear that significantly large proportions are BAME. The man in the video below argues that a tragedy of this magnitude simply would not have happened had the tenants been “blonde haired and blue eyed”, i.e. white.

I would agree. This is no coincidence. BAME people, at every level of society, are more likely to suffer disproportionately, in all aspects of private and personal life. Looking specifically at housing, research conducted by the Institute for Race Relations shows that overcrowding is most commonly experienced by Black African and Bangladeshi groups. Bangladeshi households are 63% and Black African households 75% more likely than White British households to suffer ‘housing deprivation’ (indicators of which include overcrowding and an absence of central heating). Race continues to be a key factor in how people live in contemporary Britain.

I recently went to see Reni Eddo-Lodge, author of the recently published Why I’m No Longer Talking to White People About Race, speak at the Emerald Street Literary Festival. She described researching the “big data” about race and life chances in the UK through statistics published by governmental organisations such as The Department for Education, The Department for Work and Pensions and the NHS. She found that a black boy is three times more likely to be excluded from school than the rest of his classmates. That job hunters with ‘white-sounding names’ are called to interview far more often than those with African or Asian sounding names. That black people receive harsher sentences for the possession of drugs, even though they use drugs at a much lower rate than their white counterparts. Education, employment and the criminal justice system are institutions, Reni argues, that we cannot avoid interacting with.

What Reni is describing is institutional and structural racism. She feels that we cannot live in this country without being realistic about the UK’s racist legacy and the fact that racism continues to lie at the heart of our culture. Reni stated that “history is written by the winners” and mentioned learning about only a handful of black historical figures in Black History Month, but never as part of the mainstream curriculum. She is not the first person to acknowledge this.

By ignoring this part of our history, Reni argued, we cannot expect to have “an accurate perspective of racism and inequality right now”. She rightly acknowledged that the past shapes the present and that it was unhelpful to be obtuse about this. Reni also felt that, for some white people, being associated with racism is worse than actual racism.

This feeds into a larger discussion about how privileged groups and individuals often centralise themselves when marginalised people try and talk to them about how their language or behaviour hurts them. The existence of the hashtags #notallwhitepeople or #notallmen speak volumes about the failure of privileged groups to simply listen when questions are being asked or concerns raised. Rather than putting aside their own feelings and ego, privileged people often make this about their hurt or angry feelings, rather than focusing on the bigger issue.

White people: we need to stop doing this.

No-one likes to be told that something they’ve said or done is hurtful or offensive, but privileged folks need to hear this in order to amend their behaviour. Rather than relying on BAME people or other marginalised groups to do this, however, it’s up to white people to educate and inform themselves and those around them about the racism that continues to permeate our culture. Having a black or Asian partner, child or friend does not make you immune to racism.

White people: we need to think about the privileges we enjoy because of our skin colour. If you’re not sure about what these might be, ‘White Privilege: Unpacking the Invisible Knapsack’ is a good place to start. We need to challenge racism where we see it and within ourselves. Stating that you “don’t see colour” denies the very real and painful discrimination that many BAME people face every day. Think about how you can be a better ally to BAME people. Buy Eddo-Lodge’s book. Support BAME businesses. Read this ‘Syllabus for White People to Educate Themselves’. Stop appropriating BAME culture. Consume the incredible breadth and diversity of BAME culture. Ensure that BAME people are represented in positions of power and influence in your organisation.

We now know that the residents of Grenfell Tower made a number of efforts to raise their concerns with their housing provider and local council, to no avail. This is because poor people, BAME people, older people, LGBT people and disabled people are easier to dismiss as an irritation or as trouble-makers than white, middle-class folks who broadly possess more money, power and influence. We know that these groups are more likely to be living in poverty than white people and austerity measures brought in by the current government have exacerbated this to a horrifying degree.

Theresa May’s initial failure to speak with the victims and families involved in this tragedy is no surprise. How can she look these people in the eye when her party and policies are responsible for so many of the ills that poor and BAME people disproportionately suffer?

I view the Grenfell Tower tragedy as a direct result of a racist and classist society. We cannot view this case as an isolated incident. It is a part of a much broader, embedded ideology of prejudice and discrimination. For things to change, it is vital that we recognise this.

The image at the top of the page shows two women on a busy street holding a banner which reads ‘Greed Kills’. It forms part of a series taken by Wasi Daniju of people on the streets following the Grenfell Tower tragedy. Picture shared under a Creative Commons license.

The video embedded in this article shows a black man wearing sunglasses, a baseball cap and a white t-shirt. He is speaking in a crowded street, following the Grenfell Tower tragedy, and speaks directly to the camera.