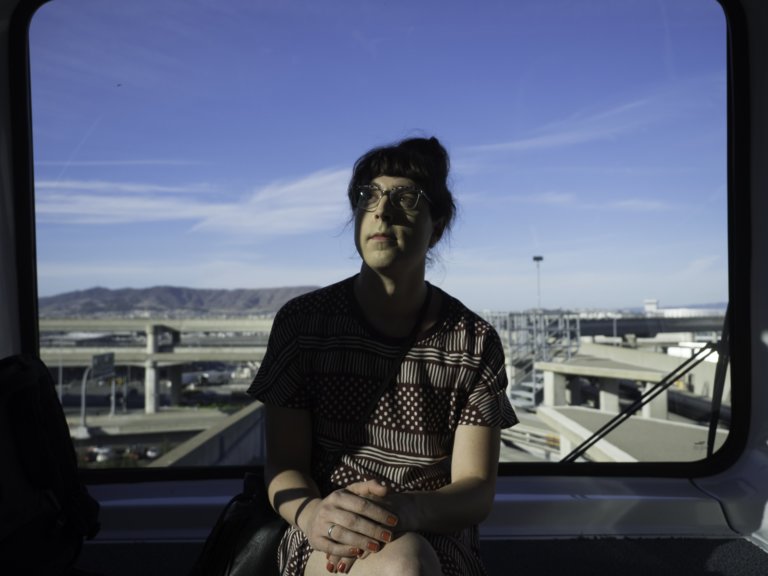 Brooklyn-based Octo Octa, AKA Maya Bouldry-Morrison, released her first 4-track, Let Me See You, back in 2011, followed by her first album, Between Two Selves in 2013. As someone whose musical tastes tend to veer toward the bleak, heavy and intense, discovering her second album Where Are We Going? earlier this year was a revelation. For me, the tracks are the perfect summer soundtrack, ideal for lazy, hot days caressing a cold beer. The first track on the album, ‘Where Are We Going Part 1’ is the ultimate Ibiza chill-out track – minimalistic piano, steady beats, muted guitar…you can almost see the heat waves coming off the sand. The rest of the album largely follows in a similar vein, with lush and dreamy soundscapes, accompanied by house synths.

‘No More Pain (Promises to a Younger Self)’ samples Mariah Carey with impressive effect and ‘Move On (Let Go)’ has a distinctly New York sound, with jazz piano and break beats. The exception is ‘Adrift’ which evokes a much darker and melancholy feeling, perfect for a dark, rainy day. “I’m really interested in how much emotion you can convey through instrumentals”, Maya stated, something she has achieved throughout this album.

An observant mind might recognise certain recurring themes in the titles Maya has given to older tracks, such as identity (‘Who Will I Become’) and turmoil (‘Forced Nature’, ‘Uneasy’ and ‘Fear’). This is no coincidence. In 2012, Maya read the now renowned Rolling Stone interview with Laura Jane Grace, front woman with Against Me!, where she came out as trans: “That was the first piece I read where I started to put together pieces about my feelings and ideas about myself. Also, it was like someone was finally talking about some of my experiences and thoughts.” Although Maya had identified as queer “since high school”, she wasn’t out. From this point forward, she began slowly making the transition to live as a woman, before publicly coming out as trans last year in this Resident Advisor interview.

I met with Maya in a Peckham pub last month, whilst she was in the UK.

Congratulations on an awesome second album. I’ve been listening to it a lot and it invariably cheers me up and makes me feel more positive. Was it your intention to make such an upbeat or happy album?
I didn’t set out originally to make a more upbeat or positive album. That’s just how I’ve been feeling lately since coming out. In general, I finally feel like myself, and I know that’s coming through in what I’m making. The music I make is always pretty attached to my emotional state, so I’m glad it translated to the album. That said, I wanted to include a dour turn at the end of the album to reflect the title (‘Where Are We Going?’). Like, I’m good, overall, but I face a lot of unexpected interactions and emotions every day that I didn’t foresee before being out.

Although there are increasingly more women involved than ever before, dance music is still dominated by men, at every level of the industry. What have been your experiences of navigating the industry as a woman?
I had the privilege of being seen as a man when I was starting out in the “music industry” so I didn’t get flack from people or questions like “did you actually produce your music?”. Honestly, though, I’ve had a relatively positive experience so far. If there are people who no longer want to hire me to play now because of who I am, then they aren’t outwardly displaying that negativity. I feel very lucky.

My biggest challenge as a trans woman in this industry is having to deal with travelling. Airports are not my friend, and TSA pulls no punches when dealing with trans folx. So, having to be up early and ready to get harassed in another airport every few days makes touring frustrating at times. It’s not fun to roll up to a club after being treated like I’m subhuman for most of the day.

Your most recent album was released through Honey Soundsystem, the San Francisco queer collective. You’ve previously talked about the importance of queer community in your life. How have you found working with the collective?
Working with Honey Soundsystem has been amazing. I originally played two shows with Josh and Robert who then asked if I wanted to do something together (to which I was like: yeah, duh). After sending some demos over, Jackie House and I worked on getting the album together. Jackie has done an incredible amount of work on it, from making sure it got promotion to sitting with the tracks forever to make sure the mastering was solid. I’ve never had anyone dedicate so much time and attention to something of mine before, and it meant a lot that he cared about it. It was also extremely important to me that I was working with a queer collective because I tried to make this an overtly queer album.

I kind of have to identify as a feminist, because if I don’t advocate for myself, who will, right?

I think there are many intersecting ideas that connect feminism and queer politics. Do you identify as a feminist? If so, what does this mean to you?
I kind of have to identify as a feminist, because if I don’t advocate for myself, who will, right? My mother actually plays a huge role in this because of the work that she does. She is an artist who has been heavily involved in the WCA (Woman’s Caucus for Art) for years. They essentially work together as a national collective to advocate and build shows for female artists, which is extremely important in a world that doesn’t always celebrate the artistic achievements of all genders equally. So, for me at the moment, I care most about visibility and equality.

Which artists are you listening to right now? Do you have anyone you want to promote?
There are four DJs/artists/bands from Brooklyn that I really dig lately. Baltra is an amazing producer who makes some fantastic and emotional gritty house music. Bergsonist, who I played with at the ill-fated Boiler Room Weekender, is really great live. She has a heavy sound that rules. Earth Boys put out a record earlier this year called ‘Myrtle Music’ that I have had on heavy repeat. And, finally, I want to promote my DJ partner from Frendzone!, Kellam Matthews. We’ve been doing parties together for a few years and he’s one of my favourite DJs to hear, always playing extra sparkly house!

‘Where Are We Going?’ is out now on Honey Soundsystem

The image at the top of the page shows Maya sitting at the back of a train or tram, with road intersections and bridges behind her, and a big, blue sky. Half of her upper body is in shadow, but the light falls on her face and right side. She is looking up into the light and appears peaceful. She wears her dark hair tied up on top of her head, a heavy fringe, glasses and a patterned cream and burgundy dress.

The embedded video in this post shows the still from the cover of the album ‘Where Are We Going?’. It shows Maya kneeling on a bed, wearing a black, sparkly dress, with black over-the-knee socks or stockings. She wears her long hair loose, glasses and is looking to her left, with a wry expression that seems to say, “Are you sure?”