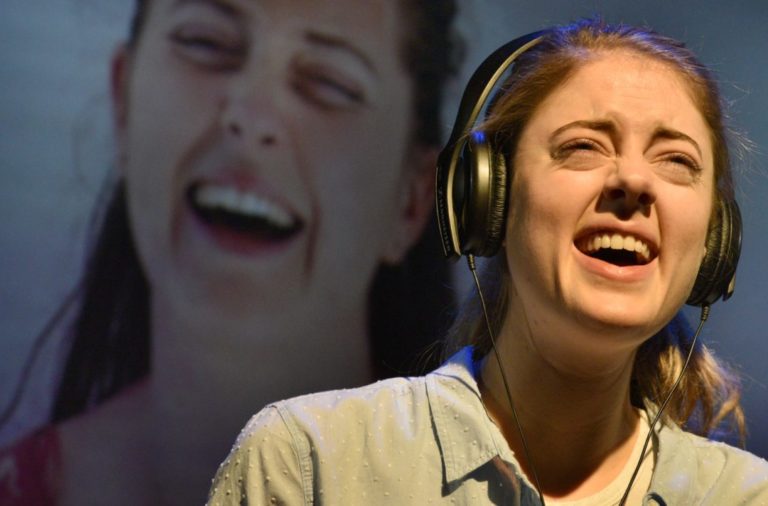 Rose Matafeo’s hour at the Pleasance Courtyard is loosely based on romantic comedies (and it is an odd coincidence that of the two shows I reviewed on the same day, this and Jane Doe both feature ‘Kiss Me’ from the She’s All That soundtrack!) and manages to take in a few explicitly feminist and intersectional subjects such as the unfairness of birth control options, the overwhelming whiteness of rom-com film stars and the supposed non-existence of feminism until Taylor Swift invented it.

Matafeo’s physical comedy is particularly good; there are a couple of moments where she mimes along to songs which I really enjoy. Her delivery falls somewhere between high status and low status, or perhaps changes between the two: she holds the room, but is also very happy to point out her own shortcomings, and as she tells us “standups just want to be loved.”

The packed-out audience love her material and it’s a joyful hour; Matafeo either punches up or at herself, there’s no nastiness. As an audience member I feel I’m watching a polished performer who isn’t going to run out of ideas any time soon. Aditi Mittal’s set is straight-forward standup dealing with themes of race, gender and the cultural differences between her homeland of India and the U.K. Mittal is instantly likeable; she tells us excitedly that this is her first time in Edinburgh and later recovers smoothly from fluffing her lines, blaming it on not being used to the “Edinburgh air”.

Talking about casual racism, she has clever quips for responding to being called a “curry muncher” and comments on the absurdity of the single-most famous representation of Indian people on television being a problematic stereotypical character from The Simpsons.

Parts of her set touch on serious issues, such as marital rape still being legal in India today and then she switches to the frivolous, with an amusing comparison of countries’ bathroom habits and commentary on the ridiculousness of toilet paper advertising.

Mittal shares with us the odds of her being here today: she is one of only six women making a living from standup out of the 1.3 billion population of India. By very virtue of this staggering statistic, as well as her natural ability to entertain as well as educate, hers is a fresh and important voice that we need to hear more of.

The language throughout is poetic rather than naturalistic, and captures the feeling of freedom on a football field and the frustration of being held back from living your dreams very well Offside is a three-woman play about football. It weaves together the stories of Lily Parr, who played professionally in the North West before the FA banned women from playing at FA grounds in 1921, Emma Clarke, the first black professional female player from the late 1800s and two modern day fictional players who are called up to train for the England team for the first time.

The play has an episodic structure, with the action moving forwards and backwards in time constantly. The actors are all superb: Tanya-Loretta Dee as Mickey/Emma and Jessica Butcher as Keeley/Lily play the same four characters throughout with Daphne Kouma playing various other parts: a commentator, coaches, journalists. The constant switching from scene to scene, plus the reliance on monologues rather than dialogue, makes it difficult for me to connect with the main characters and by the time the final crucial scenes come around I’m not yet invested enough in the characters to really care.

The language throughout is poetic rather than naturalistic, and captures the feeling of freedom on a football field and the frustration of being held back from living your dreams very well. However the footballing words used throughout, “spikes” instead of the more regularly used football boot “studs”, balls hitting the “pole” rather than the “post”, are all very odd, so much so that perhaps this was a conscious choice rather than a lack of knowledge of footballing terms. Jane Doe is a one-woman interactive performance which tackles the subjects of rape culture and consent head-on. Performer Karin McCracken, once she has reassured the audience that we can leave at any time and that both she and the wider team for the piece are there to look after us, leads the audience through the trial and aftermath of a fictional rape at a party. Although the story of the piece is nominally fictional, it is very familiar from cases such as Brock Turner, Steubenville and closer to home, Ched Evans.

The play’s narrative is told in a few different ways which keeps the pace moving along nicely: McCracken tells us stories about her teenage youth, we watch text messages appear on screen, various audience members are invited on stage to read the trial transcript out loud, we can send in our responses online and in an impressive demonstration of acting skill, McCracken acts out the words and actions verbatim from real-life interviewees we can see on the screen behind her.

In an hour long show there is not much time to explore the links between these high-profile (and lower profile) cases, media portrayals of victims, street harassment, the perceived lack of sexual agency of women and feminism, but writer and director Eleanor Bishop certainly gives the audience a lot to think about in a safe, supportive, challenging and even occasionally funny way.

Image 1 is of Rose Matafeo. She is looking directly at the camera with her hand on her hip. She is smiling slightly. Her curly hair is tied up with a yellow scarf and she is wearing metal-rimmed glasses.

Image 2 is of Aditi Mittal. She is sitting at a table and looking directly at the camera. Her hands are in front of her placed palm to palm with her fingers upwards. Her left eye is closed.

Image 3 is of Tanya-Loretta Dee in Offside taken by Lidia Crisafulli. Dee is standing proudly with her arms folded in front of her looking to one side. She wears a football jersey.

Image 4 (and the feature image) is of Karin McCracken in Jane Doe, taken by Peter Jennings. It is a photograph of the head and shoulders of McCracken, standing in front of a projected video of her recorded previously. Both images of McCracken are laughing. The real-life version in front wears large black headphones.