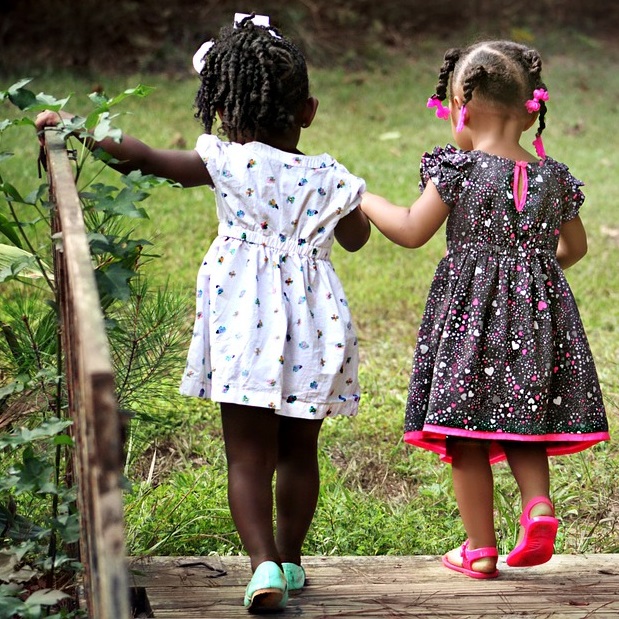 Little girls are children too

When I entered the world of childcare for the under-threes, I expected to step into a sort of pre-gender society where children are just children. On the contrary, it seems that sexist ideas and social norms are so ingrained in our culture that by the time a child reaches the ripe-old age of three, their every interaction with the world is permeated and thus characterised by perceptions of their gender. We seem to expect girls to leave their childish ways behind with their umbilical cords and show maturity far beyond their years from the outset, while boys can get away with almost anything, provided that we stand by the assertion that ‘boys will be boys’. With all this pressure on girls from such an early age, it’s no wonder that by their teenage years many girls experience debilitatingly low self-esteem and are more likely to face mental health issues than their male counterparts. So, it’s about time we addressed the issue and nipped it in the bud in their first years in the ‘system’. Allow me to illustrate some of the day-to-day sexism these girls are up against, and how we can perhaps avoid these.

First, language. It’s easy to trivialise the potential impact of our words; they’re not sticks and stones, after all. However, sexism is embedded into what we say and the way we speak to our girls. We are bombarding them with messages about what it is to be a girl. From the moment a child is born, we categorise them as either a ‘beautiful baby girl’ or a ‘bouncing baby boy’, never the other way around, and this is just the beginning. We don’t only use sexist language when we talk about children, the way we talk directly to them is also often pervaded by their gender. We are far more likely to use language to praise boys than we are to praise girls and if we do praise them, the chances are it’ll be related to behaviour or appearance, rather than hard work or talent. Such is the persistence of these gendered uses of language that it’s very difficult to avoid falling into the trap of word-association, for example saying ‘I need some strong boys to help me carry this’, without even thinking.

Do we really hope for our girls to grow up subservient and our boys to grow up aggressive and over-confident?

Next, clothing. All little girls dream of being princesses, right? Or is it simply that that’s what they are told to dream of? From everyday wear to dressing-up costumes, the clothes available to and chosen for our girls just scream sexism. Their colour options include baby pink, hot pink, purple and white, with the occasional token lemon yellow t-shirt thrown in for good measure. Then there’s the option to add glitter, ponies, sequins or cutesy text such as ‘So little and so loved’ or ‘Gym Princess’. Conversely, boys’ clothing is often blue, red or dark in colour and sporting superheroes or one-word power slogans like ‘EPIC’ or ‘ROAR’. Yes, those examples are all taken from real children’s clothing. To me, the way we dress our children just begs the question, what do we aspire for them to grow up to be? Do we really hope for our girls to grow up subservient and desperate for love and our boys to grow up aggressive and over-confident? I hope not.

Now name three things girls play with, and three things boys play with. Disturbingly easy, isn’t it? Girls play with dolls, and toy cleaning equipment and toy cooking equipment. Boys play with trains, and guns and construction toys. But why? Children are not born into the world with such restrictive ideas about what they can and cannot access, yet by the time they are old enough to choose resources and activities for themselves, most of them choose the ‘correct’ toys for their gender. They must be getting these ideas from somewhere. Not only does sexism dictate the type of toys children play with, but also the way in which they play and interact with each other. Boys are expected to engage in rough and tumble play, with those who don’t often being marginalised by their peers. Girls are expected to rehearse real-life tasks through their pretend play, or simply sit and gossip like middle-aged women at the hairdressers. Whenever an adult has a cleaning or tidying job to be done, it is almost always a girl that is asked, or volunteers to help. Too often, little girls see no difference between play and helping with these tasks, because that is what their play is.

Let’s not let challenging gender norms be an afterthought

We set much higher standards for girls than we do for boys. It’s taken as common knowledge that girls mature quicker than boys, but no one seems to be able to explain this. This begs the question; is it simply a result of the fact that they are expected and often pressured to act older than their years? We expect them to show empathy and caring for others from the word go, though many childhood psychologists have suggested this is simply not possible in the formative years of life, as it is much too complicated a thought process. We expect girls to show impeccable manners, despite the fact that deep down we are perfectly aware that manners are a product of upbringing and if they are not valued in the home they will not be important to the child, regardless of gender. We expect girls to be physically affectionate and cuddly towards other children and adults, even when they are visibly uncomfortable with this. To me, this is one of the most disturbing observations. It’s as if we are subconsciously sending girls the message that their body is not their own and they are not in control of its boundaries.

These are just a few examples of how sexism pervades day-to-day life for even the youngest of children. But what can we do? I have witnessed many a cringe-worthy attempt from adults trying to avoid being sexist that simply results in blatant overcompensation, such as ‘I need a nice kind girl to help me clean this…or maybe one of the boys would like to help?’. Let’s not let challenging gender norms be an afterthought. The key is to try to create an environment that gently encourages more gender-neutral ideas rather than try to force it down kids’ throats. Give children access to stories with strong female characters, or subverted norms, like a princess that has more on her mind than finding a handsome prince and marrying him. Provide kids of all genders with equal access to all parts of the playground and all of the toys. Any child can dress up, or play with dolls and construction toys. Put up photographs of children of all genders interacting with everything that’s on offer in the setting and perhaps even more importantly, with each other. Fill the environment with so much positivity and encouragement for all children that there is no room left for sexism and watch children flourish as they explore.

Image credit: Shared on Max Pixel under a Creative Commons license.
Image description: Two girls, one with dark skin and hair in a curly ponytail and the other with a lighter skin tone and hair in pigtails, are holding hands and walking across a bridge in a park. Both girls have their backs to the camera and are wearing knee-length floral dresses.