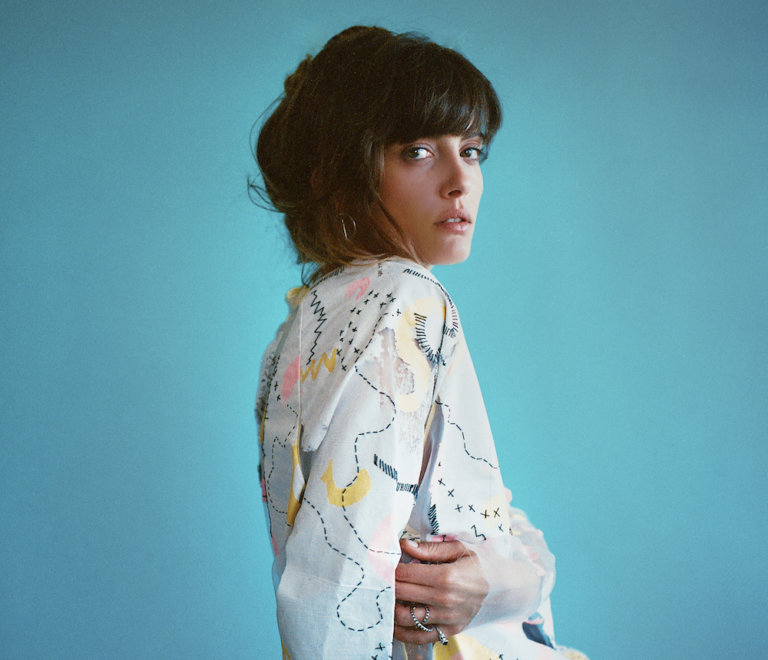 Noga Erez is an innovative and imaginative electronic artist from Tel Aviv. For years, she was advised not to talk about what is going on in Israel or to make political music. But, after years of wrestling with the dichotomy of trying to create music while living in a country whose very existence is political, this is something she’s chosen to ignore.

After months of drip-feeding music fans ferocious electro pop and eye catching videos, Noga Erez’s debut album Off The Radar was finally released in June. It includes the debut single ‘Dance While You Shoot’, a critique of the Israeli government that she believes is becoming, “more extreme, more religious, more nationalistic”, as well as the fierce ‘Toy’ and scathing title track. It’s fair to say that the overall sound of her music is of conflict, anger, fear and discomfort. If music is meant to hold up a mirror to the world, it seems that Erez has arrived at the perfect time.

Erez sings of a nightmare world in scathing angry tones

Lest readers be put off by this description, it’s worth bearing in mind that Erez’s songs are, above all else, very easy to dance to and it’s this quality as much as the inventiveness, political nature of her work, and strong visuals that make her so irresistible.

While Erez is often compared to M.I.A., Björk and FKA Twigs, her work is unique. Erez worked with her partner, Ori Rousso, to write, compose, play and produce the album, and is a multimedia artist whose visuals are as distinctive and startling as her music. Off The Radar is made up of ten songs interspaced with a series of experimental sonic interludes that knit together the album, creating a musical landscape.

The scene is set by the opening moments of ‘Balkada’, with its jarringly strange wailing, which then gives way to fat synths. Attention duly grabbed, Erez sings of a nightmare world in scathing, angry tones. The anger continues with ‘Dance While You Shoot’, a glitchy, slightly M.I.A., affair which is accompanied by a video filmed amongst the ruined shell of a tower block and urban debris in Ukraine. ‘Toy’, meanwhile, is a strutting almost grime slice of bravado, which out gangstas the gangstas with lines such as “I am the son of your leader. Give me your love, and I’ll spare you” and the concluding lyric: “They say love will kill us all”.

Perhaps the two most accessible, most obviously pop, songs from Off The Radar are the title track – a fiercely danceable and catchy critique of social media addiction (“We make up everything, we tell it like we want. A reasonable substitute for something that never was”), which combines a lyrical sense of social media addiction as disease (“I am the carrier, I am the carrier”) with unforgiving beats – and ‘Noisy’, the current single which combines pop swagger with lyrics about loud girls and authority (“I’m just a poor kid in a wealthy town, sir”).

There is a great sonic breakdown section just past the middle of the track, where you can really go for it dancing wise

‘Pity’, as Erez told The Guardian, was about an alleged gang rape in a Tel Aviv nightclub in 2015 that was filmed and posted online. The accused was acquitted when the case went to court. Both the incident itself and the subsequent court case were events that shocked Erez “to my bones”. Rather than explicitly refer to the alleged crime visually, the accompanying video to the song seeks to critique some of the related issues attached to the case and, as such, depicts Erez being filmed and simultaneously played back on screens as she performs. Whereas the song acknowledges an anger and disquiet about the normalisation of rape culture, and how – in this case – a whole nightclub and the wider public became voyeurs, complicit in the alleged crime (“everybody wants it now, everybody stands in line, partners in crime, no shame, you don’t deserve it, it makes you think”), the video also taps into debates around the consequences for societies where sizeable numbers of the population have access to a video camera at all times and the potential to use and share footage without consent or ethical consideration.

The quiet nature of ‘Worth None’, whose melody is comprised of glitchy layers of samples smooshed together and then over pinned by Erez’s vocal, contrasts with the dark subject matter of the lyrics. It is eerie and upsetting to hear her sing the line, “because your life is worth none of this”, over the eclectic melody line. This contrast between dark and slightly sweet continues with ‘Global Fear’, which is similar to a lullaby or nursery rhyme in its rhythms, but also overlaid with the sounds of rattling glass, mournful synth melodies and underscored by pounding beats. Erez’s vocals seem echoey, remote and slightly baleful in tone as she sings, “global fear takes us to another land. It throws us one by one”. There is a great sonic breakdown section just past the middle of the track, where you can really go for it, dancing wise, which sounds highly incongruous but, given the nature of Erez’s music, is perfectly acceptable.

‘Muezzin’ combines marching band drums with an eerily warped synth melody underscoring an unforgiving, harrowing rap, during which Erez maintains,“there’s no coming out of this, no good coming out of this”. I am reminded of Portishead’s ‘Machine Gun’, but the overall effect is much more sinister.

The album concludes with ‘Junior’, a slow, gently pounding drum track coupled with quiet voice and music box style melody. It is soothing waves of wonky electronica, slightly reminiscent of Mum & Dad and early WARP recordings. It’s as if Erez is letting her listeners breathe, having brought us to the end of what has been an exhilarating and harrowing sonic journey. We’ve travelled with her through nightmare worlds and realities and the contents of her head, and are now slowly but surely coming to the end of that journey. The exit sign is in sight, but you know you can always go back.

Off The Radar is out now on City Slang

Image of Noga Erez by Tonje Thilesen with thanks to Stereo Sanctity. Image is a torso and head shot of Noga Erez. Erez is a white woman with light brown hair. Her body is positioned facing to the right, but she has turned her head to face the camera and her right arm is across her torso so that this hand is also facing the camera. She wears a white, patterned shirt and her hair is pinned up. She appears slightly wary in her facial expression.

Video of the Noga Erez single ‘Toy’. This video is filmed on the flat roof of a tower block, probably in Tel Aviv. It begins at night with Erez alone on the roof, she is wearing a black hooded coat, unfastened, with ankle boots and stripy socks plus white shorts and a black t-shirt. She is gazing out across the horizon. The scene then changes to the same vantage point, only it is now daytime. She is joined by two male dancers, one black, one asian, wearing dark trousers and hooded coats. As they dance, they take their hoods down, but Erez leaves hers up throughout the video, partially obscuring her face. The three dance on the roof in a row, unsmiling, in a series of jerky and elaborate moves. They vary the speed of their moves and time lapse has been used along with speeding up and slowing down of the film to add a glitchy and alienating element to the dancing.This is interspaced with shots of Erez stalking the roof, getting close up to the camera, or standing still as the two dancers dance around her. The video ends with the two male dancers sitting on the edge of the roof, and Erez standing between them. All have their back to the camera and are gazing out across the horizon.