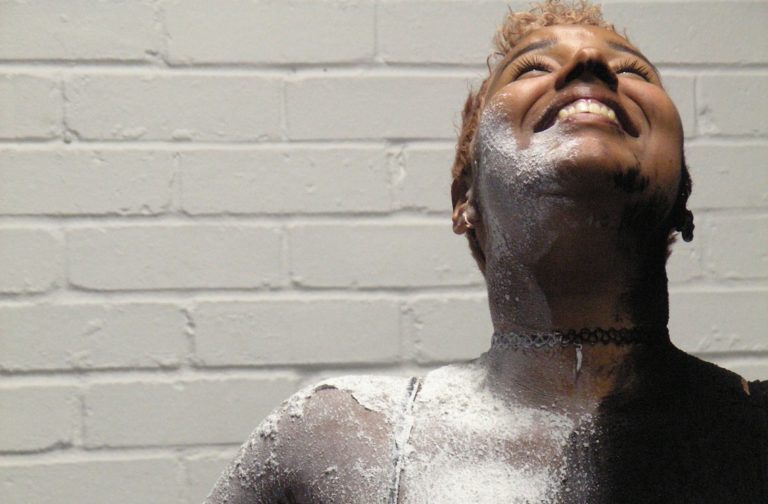 Can you tell me a bit about yourself as an artist?
I am a theatre-maker who specialises in blending spoken word and vocal looping (yes, like the thing Ed Sheeran does). I make work about identity, being an outsider and being the ‘other’. Having started in musical theatre, I did a bit of producing on the side and then found my way into solo performance via cabaret and the Roundhouse. I’m currently working on The Colour Trilogy; three pieces of theatre looking at identity through race, gender, mental health and sexuality. WHITE is the first, then GREY which is about black women’s mental health and finally PINK which will focus on gender and sexuality.

Would you describe yourself as a feminist? And if so, what does feminism mean to you?
Feminism and I have a rocky relationship. I believe in equality of the sexes, but I have a hard time throwing myself head first into feminism because I find that there are parts of it which are slightly problematic. Plus, as a working-class woman of colour there are sections of feminism that aren’t made with me in mind. I think that feminism has grown into something bigger than that single word and is still growing towards something that’s more inclusive.

In WHITE you’re exploring what it means to be mixed-race in contemporary Britain. Is this a subject you’ve covered in your work before? What made you want to make WHITE now?
I have always been mixed-race, so that’s always filtered into my work I’ve created but this is an in-depth exploration of it. I’ve never created something where I’ve specifically said: “This is about being mixed-race” until now. WHITE explores what it means to grow up mixed and I think that that’s a voice that isn’t heard in theatre (or film/TV for that matter). When I started making WHITE it was out of necessity; I was frustrated that I didn’t see myself in any of the characters onstage so I created one.

There’s also a lot of great work being made about the black female experience which, although I related to [it], left me feeling like a bit of an outsider because it was only half of my experience. I quickly grew tired of that feeling and so I started working on WHITE. In the show I share some pretty personal experiences that have led me to this point, which is something that I haven’t been able to do before. I also explore topics like internalised anti-blackness and mixed-race privilege which is something that I couldn’t have done when I was younger.

I made this show for people like me – mixed-race people, black women and anyone who’s ever felt like an outsider. I want them to see it, identify with some of it and walk away knowing that they’re not alone in their experiences

While creating the show I thought it was important though for me to put my hands up and admit that, although I do face inequality, there are privileges that I have that other women of colour don’t. I believe that, similar to white privilege, there’s no use pretending that it doesn’t exist. The faster we admit it’s there, the faster we can move forward. I should point out that there’s a lot of other things that play into this such as colourism, your facial features, your hair type and what specific mix you are to name a few. It’s definitely not a one-size-fits-all privilege!

Who has influenced your creation of WHITE?
A lot of good (and bad) theatre I’ve seen has directly influenced WHITE with shows such as Chewing Gum Dreams, by Michaela Coel, being the catalyst for me wanting to create a solo show. Companies such as RashDash have specifically influenced my theatrical style and directors, like Stef O’Driscoll, have encouraged me to be powerful, honest and push boundaries. The show contains original music with my influences being artists that I listen to such as Banks, SZA, Frank Ocean, HAIM and Beyoncé. Who do you hope comes to see WHITE? What message would you like them to come away with?
Can I say “everyone”? I know that’s a rubbish answer, I won’t say that. (Although it’s true!) I made this show for people like me – mixed-race people, black women and anyone who’s ever felt like an outsider. I want them to see it, identify with some of it and walk away knowing that they’re not alone in their experiences. It’s also important for me to have people who don’t fit into these groups in the audience. I want them to be able to experience the world from a different point of view and encourage them to start a conversation about the subject. Overall, I want to give people a reason to talk about and explore their identity, be it in terms of race, sexuality, gender or anything else. I’d also be totally fine if people left and all they had to say was: “I wanna try that looping thing”!

Do you have further plans for the production after your run at Ovalhouse?
I have things in the works but I’m not allowed to say anything right now! I would say keep an eye on my social media (@theKokoBrown for everything) or my website (heykoko.com) to stay in the know.

And lastly, is there anything I haven’t asked you that you’re burning to let the readership of The F-Word know about?
I’m very excited to announce that WHITE is being published by Oberon Books and will be available during the Ovalhouse run! (Soon to be followed by the soundtrack, which is being recorded now.)

Both images are courtesy of Koko Brown

Image one is of Brown standing at a microphone. She looks as if she is smiling or laughing and has her arms raised either side of the microphone stand. Her image takes up the lower half of the picture; the top half is in darkness apart from a stage light which can just be seen in the corner of the photograph.

Image two is a close-up photograph of Brown’s torso. She has white powder all over her right side, across her face, shoulders, chest and arm. On her left hand side is black powder in the same pattern. She is slightly to the right of the image. There is a white-painted brick wall behind her. Her head is thrown up and she’s smiling. This image is also used as the feature image.