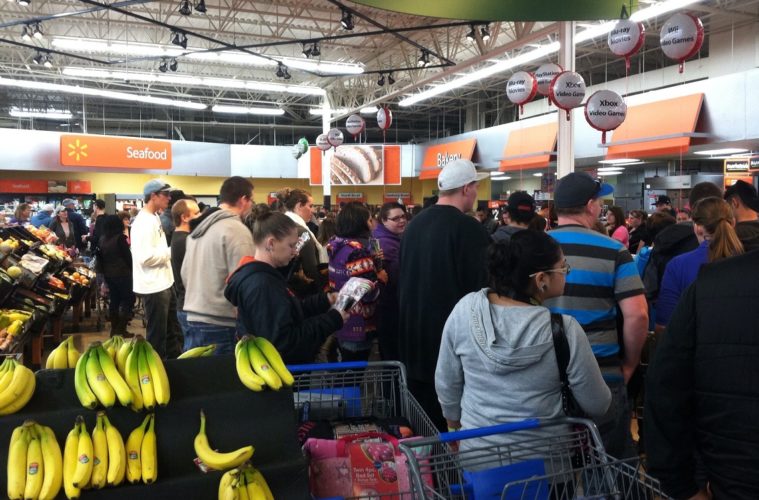 Unless you’ve been living under a rock, you’re probably well aware that tomorrow is officially Black Friday, the date when retailers offer heavily subsidised deals on consumer goods. While this was traditionally a North American custom, the trend has expanded worldwide, with the UK joining the fray in 2010.

Since then, newspapers and television have gleefully reported on the “chaos” and “mayhem” that characterises this major shopping day. News crews perch in front of winding queues of shoppers, keen to capture the drama and altercations that are now associated with this inauspicious date. Reporters shake their heads and raise their eyebrows, bemoaning the ‘barbarism’ of the heaving masses.

And “heaving masses” are exactly what they are. Look closer at the images and videos that document this event and you’ll see that many of the shoppers fit the remit of those disproportionately affected by austerity and probably keener than most to bag a bargain, where they can. These groups include women, black and minority ethnic (BAME) people and working-class folks. Although many people may rightfully feel that attempting to identify someone’s class based on their appearance, language or accent is incredibly fraught, I would argue that this is something we frequently do in the UK’s class-obsessed culture. As long as the working classes continue to be vilified within our culture, however, identifying someone as working class runs the risk of contributing to further marginalisation. I identify as working-class and recognise that class is a deeply complex issue – we perhaps pander to respectability politics by the frequent unwillingness to speak about it openly.

As we know, women – who are essentially working for free from National Equal Pay Day (10 November this year) to the end of the year due to the gender pay gap – are significant losers on the financial stage and have been unduly impacted by cuts brought in by the Tories. This is more acute for BAME women, disabled women and older women. Findings published earlier this month by The Fawcett Society also reveal that the gender pay gap for women in their twenties is actually growing after years of decline and is now five times greater than it was six years ago.

We also know that women who are living with a partner who is a man, or women who are co-parenting with a man, tend to bear the dual burden of paid work outside the home, while also undertaking the bulk of domestic work inside the home. That’s before we even get on to emotional labour, which includes – you’ve guessed it – thinking about and making time to shop for presents, organise food and logistics ahead of Christmas. On this basis, it seems clear that women are also more likely to participate in Black Friday shopping.

It’s a similar story when stores advertise Christmas goods weeks prior to the big date itself. While this can be a deeply unwelcome reminder for many, it’s often a good opportunity for those on low incomes to plan ahead and start stockpiling things they might want or need over the Christmas period. Staggering spending over a few months can make this expensive time more manageable.

Rather than sneering at Black Friday shoppers, it’s worth remembering that often these people are individuals who may have a vested interest in being first in that Curry’s queue. Growing up in a low-income household, I was fortunate enough to never feel the pinch at Christmas. This isn’t the case for all families, however. Gift giving is a long-standing part of the Christmas tradition and poorer families often want to make this time of year as special as possible, particularly when there are children involved. Who can blame them?

Like many other working-class families, there’s often a sense of pride in ensuring that no one misses out at this ostentatious time of year, be it through begging, stealing or borrowing (all things human beings tend to do when they’ve been placed in desperate circumstances). We already know that national debt has been on the rise, with the total amount owed on UK credit cards hitting a record £66.7bn at the end of November last year, with Black Friday and Cyber Monday playing a large role in people’s spending.

I can’t help but feel that there’s a degree of class snobbery, racism and good old-fashioned misogyny involved in people’s disdain for this mass-shopping event

With marginalised groups arguably well represented on Black Friday, I can’t help but feel that there’s a degree of class snobbery, racism and good old-fashioned misogyny involved in people’s disdain for this mass-shopping event. This is fuelled by media coverage, which tends to be sensationalist in the extreme. Pictures of people fighting over Xboxes and wide screen TVs, who I would argue fall into an extreme minority of shoppers, certainly reinforce the idea that participants are “lower class” or “lesser”. In addition, shopping is still perceived as quite a gendered pastime and, as a consequence, is often dismissed as frivolous and self-indulgent. Shopping is an absolutely necessary activity. We need to buy stuff (or have stuff bought on our behalf) in order to live and function in this society.

While I don’t dispute that many more affluent shoppers also might take advantage of the discounts on offer, I suspect that they are more likely to do so from the comfort of their Loaf armchair, where they can browse in peace, away from the bun-fight that Black Friday is characterised as. I feel that there’s a fear of ‘vulgarity’ that participating in this demonstration of mass consumption seems to engender amongst a certain section of the chattering classes.

Although there’s an argument to be had about our mass consumption and the catastrophic impact this is having on our planet, it’s worth remembering that capitalism tends to trump environmentalism for many people. Resisting the omnipresent marketing campaigns that tell us that buying X, Y and Z will bring us love, happiness, sex or wealth is not easy. It’s also interesting to note that, according to George Monbiot, the wealthier you are, the more likely you have an environmental awareness. Ironically, it’s this 1% who apparently has the largest carbon footprint. It comes as no surprise then that the media have yet to feature a similar shaming campaign in relation to this elite group. If the roles were reversed and marginalised groups were responsible for this, I suspect the right-wing press would have a field day.

On Black Friday, try and approach the rolling coverage of “out of control” shoppers with a critical eye. Rather than swallowing the media narrative of greedy and obnoxious shoppers, ready to hand over their first born for the new Dyson hairdryer, consider the possibility that some of the participants may simply be feeling the sharp end of austerity and are trying to save some money ahead of the capitalist feeding frenzy that Christmas has become.

The photograph at the top of the page shows a busy shop during the Thanksgiving Thursday sales at Walmart, Klamath Falls, Oregon in the video games and films section. The picture is primarily composed of shoppers who appear to be queueing. To the left and front of the photograph there is a display of bananas. Image by Bobjgalindo [CC BY-SA 3.0], via Wikimedia Commons.

Joanna is the current rotating editor of The F-Word. You can find her on Twitter at @MsWhitehead100