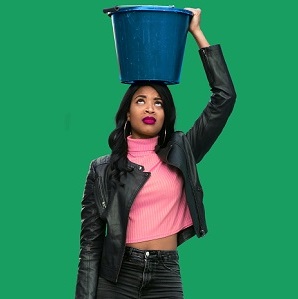 Calming down in Camden

The annual festival of feminism, ‘Calm Down Dear’, runs again at Camden People’s Theatre from 16 January until 4 February. F-Word readers can get 10% off any show in the first week with the code CDDFWord10.

Ahead of the festival, I asked some of the artists a few questions over email about feminism, their shows and the future. Here’s what they told me. Racheal Ofori: So Many Reasons

What inspired you to create the show that you’re bringing to Calm Down Dear?
The new show, So Many Reasons, is inspired by the gravitas mothers have on their daughters regarding their sex and what they give them to help them navigate the world as women. I was particularly focusing on the cultural difference between a first generation migrant mother and a first generation citizen daughter. An example being my mother and I.

The piece explores cultural clashes, and this includes aspects of religion that can be so woven into a lot of west African culture. We watch Mel (the daughter in the set up), wrestling with these cultural and religious ideologies.

What’s making you angry, excited or calm for 2018?
I’m excited for 2018 to be pushing boundaries. I love to use comedy to address tough issues like race and sex. Being a black girl, I’m eager to be edgy with my writing voice to make people laugh uncomfortably and address challenging topics. I write in a range of mediums so I’m excited to hone those skills!

I made Syd & Sylvia because I was sick of carrying around my anger at the constant, ugly reminders that – thanks to patriarchy and rape culture – public space doesn’t really belong to me or to any woman. I’d had the character of Syd – a surly nightclub entertainer – floating around my consciousness for about a year before knowing what to do with him. Meanwhile, I was finding myself becoming enraged and feeling stifled on a near daily basis by my experience of being a woman in the world.

Later on, following discussion and development, I added the character of Sylvia and constructed the narrative of them being a married couple who run a Working Men’s Club in the 1980s, casting Syd as an abusive partner and Sylvia as being in the throes of a feminist awakening, thanks to her women’s studies class.

It’s my belief that every case of violence against women – from the gruesome to the micro-aggressive – is an attempt to intimidate us back into our perceived ‘place’. All of these ideas and considerations are central to my motivation behind creating Syd & Sylvia and are evident in the show’s content.

Do you consider yourself to be a feminist? If so, what does feminism mean to you?
To us, the definition of feminism is equality: political, economic, social and personal. It seems ridiculous that any human being wouldn’t want that! If we could achieve a balanced, equal society we wouldn’t need to label ourselves anymore.

What’s making you angry, excited or calm for 2018?
Angry: Trump, Brex-shit, #MeToo; there’s a lot to be angry about, so it’s especially infuriating when women are told they shouldn’t be angry. That they should “calm down, dear” and not make a fuss!
Excited: Performing our show and inspiring other women to kick aging right up its arse!
Calm: Not giving a fuck about the small stuff, and a large glass of red.

The question: “Are you a feminist?” is actually very reductive

Hannah Ballou: The Doctor Is In

What does feminism mean to you?
It’s more like ‘feminisms’. The word encompasses a huge range of perspectives, philosophies and activisms. The question: “Are you a feminist?” is actually very reductive. I try to ask: “What kind of feminist are (or aren’t) you?” I aspire to an intersectional queer materialist feminism, but I know I fail sometimes. I also like Peggy Phelan‘s definition: “Feminism is the conviction that gender has been, and continues to be, a fundamental category for the organisation of culture. Moreover, the pattern of that organisation usually favours men over women.” (Phelan 2001:18) It’s broad, but it doesn’t skew toward a liberal feminism that emphasises equality, like more facile definitions.

What inspired you to create your show?
One day my name changed from “Hannah Ballou” to “Dr. Hannah Ballou” and the hubris accompanying that transition was hilarious to me. For example, I was incapable of answering the previous question without at least one formal citation.

To us, being feminists means valuing femininities in every form they take. Our feminism listens closely to our own actions, reactions, gestures, words, and values – and those of the people and cultures around us. Feminism requires the critical perspective of what impact these actions have on the safety, empowerment, success and fulfilment of the womxn in our lives.

What inspired you to create your show?
This piece was inspired by a desire to understand the role that discipline has played in our own girlhoods and a fascination with the ways womxn in particular learn to mediate, restrict, or indulge in their desires from a very young age. For Natalie in particular, this piece is an apology/love/hate letter to her mother and schoolteachers for being a brat of an adolescent. Do you consider yourself to be a feminist? If so, what does feminism mean to you?
Yes, of course. Although increasingly, the way we are getting distracted in the trenches of terminology and what is or isn’t ‘feminism’ or ‘intersectionality’ or whatever else, makes me sympathetic to people who are more reluctant to use the label. Feminism has been succinctly defined by Chimamanda Ngozi Adichie, I feel: the work towards the social, political and economic equality of the sexes.

What’s making you angry, excited or calm for 2018?
I’m excited to make disruptive and uncomfortable work – work that requires true engagement with difficult ideas. Work that demands as much of me as an artist as it does the consumer. Politically, I am ready to observe and react to things in a more nuanced way. Social media and the frenzies it creates has made me too reactive.

The starting point for Love Songs was resurrecting autobiographical poems I had written about my relationships over the years and piecing them together to form a story that highlighted personal coming-of-age challenges, such as navigating the university dating scene with a very limited knowledge of sexual education and dealing with sexual assault. It’s evolved a lot since, and it’s been exciting and empowering for me as both a person and artist to grow with the work.

I’m excited for so many things in 2018! At last, I’m getting around to see the extended run of Laid by Natalie Palamides at the Soho Theatre and I can’t wait to see Hollywood finally stop their whitewashing nonsense in the release of Crazy Rich Asians later this year. Combined with taking Love Songs to the Brighton Fringe and the fact that I have some vouchers for free tacos at Wahaca … it’s going to be a good one.

Last April, we were sitting in a pub, where most of our grand plans are formed, and we got onto the subject of our Catholic upbringing. We realised that there were issues there that we felt shamed by: from anti-abortion seminars, to first holy communions, to parts of the mass itself. We were excited and fascinated by the similarities and differences our upbringings shared. We realised how shaped we had been by the experiences we’d had with the church … and how much shit we still had to work out.

So, naturally, we decided to create a show! Bodies investigates how our Catholic roots have affected who we are today. We ask how we can reconcile happy childhood memories, along with the not-so-happy ones, and critique and embrace what is often seen as an organisation that creates far more hate than good.

Essentially, to me feminism means the inclusion and equality of all gender identities from all backgrounds, races, sexualities, abilities, classes and religions. My perception of what feminism is has changed dramatically over the past few years through incredible online intersectional feminist support groups such as JALI.

Microsoft’s recent ad campaign for women in STEM is making me angry. Their approach to the female STEM issue is centred around expectations of women, rather than reprimanding or highlighting male attitudes. As written here: “There’s a reason women and girls leave STEM. It is because STEM is so hostile to women that leaving the field is an act of survival. It was for me. Microsoft, do not dump this shit on the shoulders of young girls. It’s not their responsibility; it’s the responsibility of those in power. That means you. Get it right.”

My previous show, Muvvahood, focused on the experiences of single mothers. For that show, I interviewed many women that identified as single mums and a large percentage of them had experienced quite serious housing issues. I did a lot of research for Muvvahood surrounding housing, most of which didn’t make it into that show so I knew I had to make another piece. Currently, in the media there’s a huge amount of talk about the housing crisis, homelessness and temporary accommodation in general, but having had my own housing issues, I don’t think many people really understand the systems and structures we’re fighting against unless you’ve been directly involved in the situation yourself. I wanted to make TEMPORARY to really explore those issues; the human cost of the housing crisis. As with Muvvahood, it’s going to be a mix of different styles, hard hitting and full of humour.

‘Calm Down Dear’ runs at Camden People’s Theatre from 16 January until 4 February. Tickets for all these artists can be bought here and using the code CDDFWord10 will get 10% off ticket prices for the first week.

Image one is of Racheal Ofori in So Many Reasons. Ofori stands holding a blue bucket on her head. She looks up at the bucket as if she might be bemused by it, or some other emotion. She wears black jeans and a leather jacket and a pink top. The whole picture has a green background.

Image two is of Vanessa Kisuule in Sexy. Kisuule sits on teal blue velvet looking directly and potentially provocatively at the camera. She wears a green bra and knickers and fishnet tights. She is framed by red curtains.