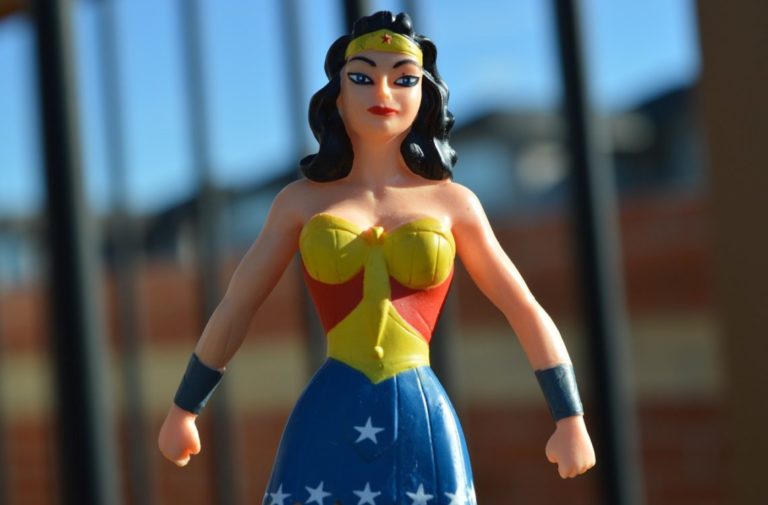 Is Wonder Woman a feminist?

When Wonder Woman was reimagined on the silver screen last year, there was much for feminists to celebrate.

The sight of her dodging bullets in the most recent film gave me the same frisson I felt as a teenager watching the 1980s TV series. I almost bought some merchandise: a T-shirt with the words ‘strength, grace and love’ under an image of Wonder Woman looking gorgeous. I didn’t buy it; something was not quite right.

One of the reasons I enjoy Wonder Woman is her physicality: seeing a woman punch her way through feminine stereotypes is always gratifying.

Iris Young’s essay, ‘Throwing Like a Girl’, explores how women are conditioned not to take up space, use expansive gestures or exhibit muscular force, but to be delicate and passive in movement. When we see physically strong women breaking out of these patterns, it stirs something in us.

Ripley in Aliens, Trinity in The Matrix, Sarah Connor in Terminator 2, and Wonder Woman are physically strong women who have faced peril yet prevailed. It is exciting because they show us female bodies that are acting outside what Young calls “feminine modalities” – those constricted ways women are supposed to act. You can picture what ‘throwing like a girl’ looks like, I’m sure.

The creation of Wonder Woman in the 1940s, by William Marston, sprang from his own feminist agenda. As outlined in Jill Lepore’s The Secret History of Wonder Woman, Marston loved women. He lived with two, both of whom bore his children. His wife agreed to this ‘thruple’ so she could continue her career while having childcare available at home. Marston transferred his unconventional attitude to sex, love and women on to Wonder Woman, believing women would one day rule the world.

During the interwar years, feminism and activism in the US were on the up. Charlotte Perkins Gilman had just written Herland; Margaret Sanger, a campaigner for birth control, was at the peak of her fame (incidentally, it was Margaret Sanger’s niece who was Marston’s lover); Lou Rogers, a female feminist cartoonist was popular and some were predicting that there would be a female US president before the end of the 1940s. It was here that Wonder Woman exploded onto the scene: feminism personified, with bullets ricocheting off her golden bracelets.

However, Wonder Woman’s feminist credentials are complicated by Marston’s penchant for bondage, believing that all women secretly want to be sexually dominated. The early storylines in DC comic books frequently saw Wonder Woman, showing as much flesh as possible, in chains and ropes, being gagged, spanked and whipped. Being chained by a man was Wonder Woman’s weakness, and though the imagery was overtly about patriarchal oppression, it was also about kinky sex in which the male was dominant. The fetishisation went hand-in-leather-studded glove with Marston’s idea of feminism.

Whilst the 1940s version of Wonder Woman had strong feminist messages, Marston believed that one of women’s real superpowers was ‘love’, mostly manifesting in maternal love. It is this essentialism and idealisation of women that sets alarm bells ringing.

In the 1950s, Wonder Woman was instead portrayed as fashion model, babysitter and movie star, as women were forced back into the domestic realm after the war. She was rescued from domestic drudgery by Ms., a feminist magazine launched by Gloria Steinem, which featured the words ‘Wonder Woman for President’ on its debut cover in 1972.

But there were divisions amongst feminists over what Wonder Woman really meant for women. Betty Friedan, author of The Feminine Mystique fell out with Gloria Steinem for telling women that they, too, ought to be ‘wonder women’. Betty had a point.

A friend of mine, fed up with the unrealistic expectations placed on her as a wife, mother, and full-time breadwinner, decided to divorce her husband. Explaining her feelings to her (ex) in-laws, she simply told them that she wasn’t Wonder Woman. Their reply was: “Oh, but we all thought you were!”

Here’s the rub: if we are not vigilant, Wonder Woman begins to morph into a model of the woman who carries the entire domestic burden whilst seeking, and possibly needing, to participate in the economic world while fighting the patriarchy in her spare time, if she has any energy left.

Wonder Woman has been used as a propaganda tool for feminism. But she has also been used by anti-feminists, as a model for a woman who serves patriarchal and capitalist ends. Whilst we eat popcorn, we can take from her fiction the feminist messages that are edifying (maybe the T-shirt should just say ‘strength’). But when we come out of the cinema, we need to resist being turned into patriarchal versions of Wonder Women along with the chains designed to keep us in our place.

Image by ErikaWittlieb from Pixabay

Image is a photograph of a small model of Wonder Woman.