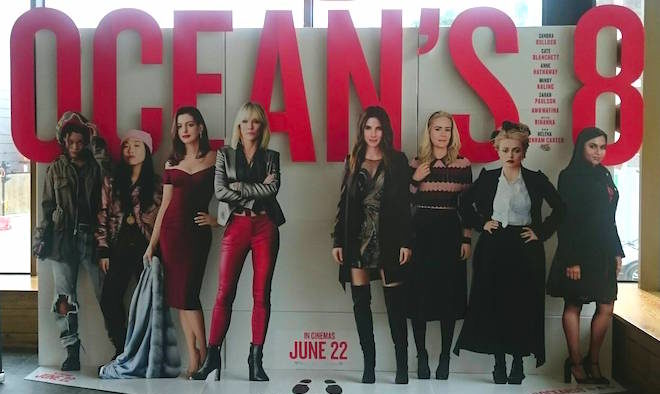 Don’t get swept into this Ocean

This is a guest post by Lauren Fraser, a 22-year-old journalism graduate originally from the Shetland Islands, now living and working in Scotland’s central belt. She is currently juggling working full time in further education with writing about feminist issues

Ocean’s Eleven is getting an all woman reboot, because apparently what Hollywood took from Ghostbusters (2016) was that it must remain palatable to fragile masculinities (more dresses!) if all is to be kept PR-positive. Ocean’s Eight, directed by Gary Ross and co-written by him and Olivia Milch, follows Debbie (Sandra Bullock), sister to previous lead Danny (George Clooney, attached as producer), because it makes sense (clearly) that they are con artists siblings who never work together. I’m not the first to conclude a Kim Kardashian cameo does not guarantee a fresh take, but the well-known Hollywood rebooting obsession of anything deemed profitable is not the (chief) source of ire. That goes to hailing the film as feminist, as has increasingly been the case. An insult to feminism and a progressive society currently out of grasp. Is it progress? In the weakest possible way, maybe. Is it enough? Not even close.

The headlines associating the film with feminism increased last year when the trailer dropped. Before, there was a sense not everyone agreed the film is a feat of feminist achievement, with opinion pieces from Thelma Adams and Daisy Buchanan. By the time Emma Teitel raised the sentiment in late 2017, the positive PR “fangirl parade” she was denouncing was in full flow. For example, W Magazine ran an online article titled ‘Anne Hathaway and Sandra Bullock think the filming of Ocean’s Eight was as feminist as the movie’. After #MeToo, the industry’s oppressive power structures unprecedentedly examined, are we still going to gush over women plotting how to steal a necklace?

The current wave of feminism keeps waging war on archaic ideas and institutions. Ideas and institutions, with the concept of intersectionality born from how oppression takes many forms. The so-called progress from the likes of Ocean’s Eight falls into the same trap as Sheryl Sandberg’s Lean In movement, empowering few privileged women to operate within what is still an inherently unfair and apparently unchallenged system.

Yes, it’s great to see a heist plot from with an all-women ensemble who by all accounts had fun filming. Don’t forget it probably exists mainly because it is a male directed, male produced rehash of a profitable all-male trilogy. We’re out of casinos, over to the high fashion of the Met Gala, no longer targeting money vaults but jewellery. Somewhat less intense negative reaction than to Ghostbusters can probably be explained by the fact that the plot involving women trying to steal a necklace from a fashion event doesn’t encroach on what some fragile masculinities consider ‘their’ territory.

Feminism continues to cement itself into the mainstream, perhaps not always helpfully. Buzzword, t-shirt slogan, a brand packaged up and sold back to us, all great ideas as long as nobody rocks the boat too much. Late comedian and millennial prophet Bill Hicks comes to mind (“Stop putting a dollar sign on every fucking thing on this planet!”) as Hollywood jovially congratulates itself for making a “women’s film” and giving not just one, but eight “women actors” the chance to engage with a pre-established male narrative.

Of course it is possible to subvert canonical perceptions. Take casting Swaziland-born actress Noma Dumezweni as Hermione Granger in 2016 Harry Potter and the Cursed Child. The film was widely praised but there was also the usual Daily Mail-style brand of “political correctness gone mad” hysteria. J.K Rowling tweeted: “Canon: brown eyes, frizzy hair, very clever. White skin was never specified. Rowling loves black Hermione.” Hollywood’s representation problem is not news. If film provides a mirror image of society, it should come as little surprise that what we’re getting is what bells hooks terms the “capitalist white supremacist patriarchy”. Not ignoring great strides made on screen (Black Panther, anyone?), it would be naive to suggest that this alone equals solution. Improved representation plays a role in empowerment that can’t and shouldn’t be denied, but it’s not enough.

While there is no shortage of women and non-binary creators of all kinds of media, their presence is sorely lacking in the sphere of blockbusters dominating our culture. Large distribution companies, focused on profit-making, are still disproportionately deciding what we see and by whom. It may be true there is not much change a single person can effect on the whole world, but to suggest we are powerless removes all responsibility. Resistance can be as minor as deciding not to pay your hard earned coin towards the escapism offered by Ocean’s Eight and using said money to make the little bit extra effort of investing instead in the original storytelling of a woman or non-binary creator. Hit that “capitalist white supremacist patriarchy” where it hurts, let your bank account do the talking – it won’t be enough, but it’s a start.

Note from the film editor:
Ocean’s Eight opens in cinemas on 18 June but obviously after reading this post you might not want to see it! If you’d rather see a film made by a woman director, check out this list of 52 films directed by women in 2017. If you live in London, the season dedicated to pioneering French filmmaker Agnès Varda is in full swing at BFI Southbank, details here.
Happy watching!

The picture was taken by The F-Word’s film editor Ania at Sheffield’s The Light Cinema. It shows a lifesize cardboard cutout promoting the film, with large red lettering “Ocean’s 8” and eight protagonists facing the viewer.