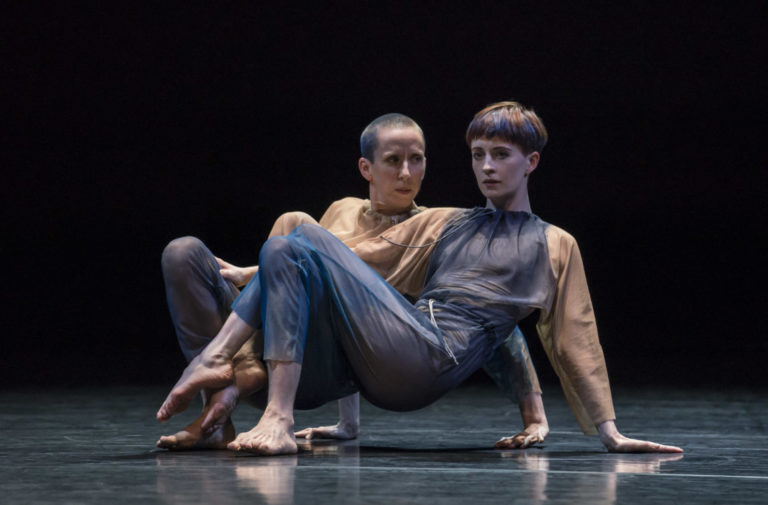 RECKONINGS, , An evening of dance Reckonings: bold new voices in dance Celebrating the 20th anniversary of the current theatre, Sadler’s Wells commissions three works from a new generation of UK-based dance-makers. Julie Cunningham, whose work is concerned with gender identity, has recently launched their own company after dancing with Merce Cunningham and Michael Clark’s companies. Alesandra Seutin fuses urban dance languages with African styles to explore contemporary issues. While Botis Seva, from collective Far From the Norm, uses foundations of hip hop to create his own physical dance language. Credit: JOhan Persson

“I like working with text and poetry to inspire my work”: an interview with Julie Cunningham

Julie Cunningham is an LGBT feminist contemporary dance-maker who will be making their Sadler’s Wells solo stage debut, alongside other up-and-coming dance-makers who have something socio-political to say about today’s society, with Reckonings in October. Their all-female piece for the Triple Bill is inspired by a text called The Lesbian Body and examines sexuality, visibility and gender boundaries, throwing into question the idea of gender norms in dance.

I asked Cunningham a few quick questions over email ahead of the performances in the middle of this month.

Could you tell me a little bit about your career leading up to this point?
I have been a professional dancer for 15 years. I trained in ballet and contemporary dance at Rambert School, then worked with a ballet company before moving to New York to join Merce Cunningham Dance Company. After 10 years in New York, I came back to London to work with Michael Clark. In 2015, I had a break from dancing with Michael and began to make my own work. I was encouraged and supported by the Barbican which led me to making my first full length work [Double Bill] and presenting it there in 2017. Now, Sadler’s Wells has commissioned me to create a piece for their 20th anniversary production Reckonings, which will be a socio-political work.

Why did you decide to set up your own company?
I think at first it was for practical reasons, to help make works. I was, however, quite uncertain about having a company because I didn’t know how to go about running it, or what a company might be used for. Now, after a bit of experience, I feel like it’s a useful entity for making work and for myself – although it’s my company with my name [Julie Cunningham & Company], it’s also very separate from me as an individual.

Who are your inspirations?
I like working with text and poetry to inspire my work. Poetry, in particular, is interesting in its relation to movement because of its rhythm. Poets I have been reading include Kate Tempest, Eileen Myles and Audre Lorde. Recently, I have also been looking at the work of female photographers, and their view of the female body: Zanele Muholi, Claude Cahun, Alice Austen, Francesca Woodman and Cindy Sherman. I am also inspired by my peers and the people I work with in the studio.

Can you tell me about this piece came about?
It started by working with a text called The Lesbian Body by Monique Wittig. It’s an experimental novel where the centre is constantly shifting and the characters are changing form. It is a fluid, unfixed world of both tenderness and violence. I was really interested in how I might work with it, and what movement might come out for the images it created for me.

I don’t know a great deal about dance, but I work in circus and I assume the same gendered tropes turn up in them both: muscly men throwing tiny women into the air, ‘arguing’ male/female couples and the like. Is this something that your piece is going to question or am I barking up entirely the wrong tree!?
I will be presenting something non-normative in terms of how we relate to each other and the space, so gender and identity are likely to be highlighted and explored, including a bit on the politics surrounding these concepts.

Will you be dancing in the piece as well as choreographing it?
Yes, I will!

And do you think it might have a further life after October?
I hope so. I would like to expand on the work further.

Reckonings will be at Sadler’s Wells in London from 11 until 13 October.

The feature image is from Reckonings. It shows two dancers, one of them Cunningham, in crab-like positions on the floor on their hands and bare feet. They wear diaphanous blue and orange tops and trousers. The dancer in front looks straight ahead and Cunningham, who is slightly behind, looks at the other dancer.

The image in the text is a studio portrait of Julie Cunningham by Rick Guest. It shows Cunningham from the thighs up. They are sideways to the camera with their face looking somewhat sternly forwards and are holding their left arm up in front of them. Their face and hand look very pale against their dark clothing and the dark blue of the background.