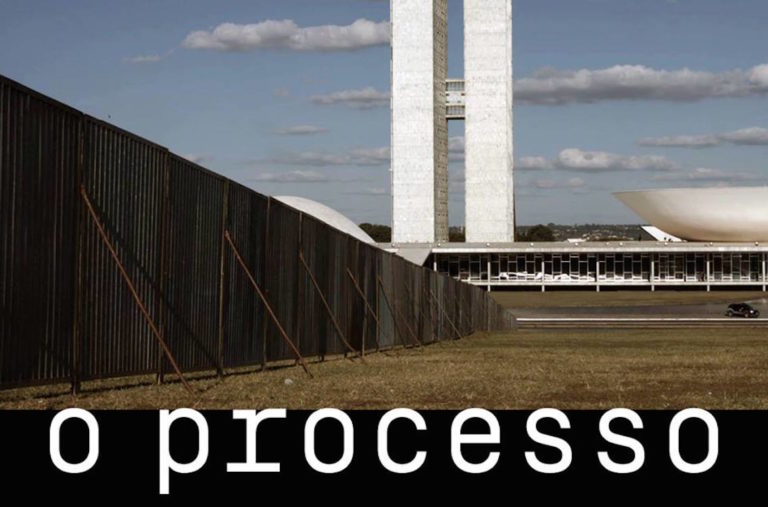 A woman on trial: the toppling of Dilma Rousseff

Documentary The Trial (original title O processo), directed by Maria Augusta Ramos, premiered at the Berlin Film Festival in February 2018. It follows the impeachment of Brazil’s first woman president, Dilma Rousseff, whose mandate was cut short just as the eyes of the world were turned to Rio de Janeiro for the 2016 Olympic Games.

The film starts with drone footage of the Brazilian parliament on the day the deputies voted to initiate the impeachment process by the accusation of fiscal crime liability against Rousseff. Security measures included building a wall dividing the opposing groups, identified by the colours red (for Rousseff’s supporters) and yellow (for the opponents). The camera captures the division between the crowd through aerial image. Rousseff was elected in 2010 as the chosen successor of social reformist Lula, both prominent members of the Workers’ Party. The anti-government movement started with student organisation Movimento Passe Livre protesting against the increase of the public transport fares. As other groups joined them to contest various issues across the country, it became a spontaneous massive protest movement in June 2013. During the 2014 election, Rousseff faced the economic crisis that started in 2008 in Europe, which increased the population’s dissatisfaction. Still, she was reelected with 54 million votes. The opposition leader Aécio Neves (PSDB party) appealed to the Electoral Supreme Court to recount the votes as he claimed the voting machines were compromised.

After the recount it became clear that Rousseff had won the elections fairly, yet a belligerent opposition questioning her legitimacy to rule blocked her in the Congress, refusing to pass any of her bills. Her government quickly became engulfed in corruption scandals, and Operation Car Wash was the most notable investigation of many members from her party and government coalition. The beginning of her second term was marked by the discontent of the upper classes with Rousseff’s politics and the polarisation between opposition and her supporters.

Archive footage shows unbelievable statements made by deputies justifying their vote against Rousseff. God and family are repeatedly invoked and praised

Ramos picks up on that sense of division which hits higher notes as demonstrators in 2016 watch the voting from outside of the Congress and externalise their emotions like football fans, shouting and cheering for each vote for or against the motion. Archive footage shows unbelievable statements made by deputies justifying their vote against Rousseff. God and family are repeatedly invoked and praised. Rousseff’s torturer during the military government, Colonel Brilhante Ustra, is paid tribute by one of the deputies, Jair Bolsonaro. Yet, this is just the beginning.

What comes after this theatrical opening are private meetings, the trial process in the Senate and press conferences in the parliament. Ramos mixes archive footage from the Brazilian public TV and her own documentation of the Workers’ Party lawyers’ meetings as they prepare for the trial. The movie presents a partial point of view of the event, given that Rousseff’s prosecutors refused any participation in the film. Ramos reveals the mechanisms and strategies employed by Rousseff’s defence to avoid impeachment. Through juxtaposition of images, she constructs a dialogue between the characters, creating a new narrative in the backstage of the trial.

Even though Ramos presents a partial view, the movie is descriptive and elucidating because the filmmaker uses news archives to create a collage of what happened during Rousseff’s trial. There were leaked recordings of conversations between politicians and businessmen plotting to impeach Rousseff in order to stop the Car Wash investigations. This source was used by the defence during the process and Ramos shares it in full, which confirms that a coup is underway.

The director chose an observational style for the segments where the audience are witnesses of dramatic events, with no voiceover nor comments direct to the camera. This footage looks as if there was a hidden camera, making the facts credible as Ramos doesn’t comment nor shares her own opinion in any other way. In the course of the process, it becomes apparent to the viewer that the accusation of fiscal crime against Rousseff is unsupported. However, Rousseff’s opponents don’t agree with the defence. The defence attorneys represented by senator Lindbergh Farias, the president of the the Workers’ Party Gleisi Hoffmann and José Eduardo Cardozo emphasise that the nature of the allegations is political and ideological and therefore cannot be defeated by any legal fact presented by them.

The turning point in the storytelling shows Farias referring to the book The Trial by Franz Kafka, alluding to the absurd mechanisms behind the scenes leading to the denial of their application. The choice of the film’s title is directly related to his speech and explains the corrupt bureaucratic system of Brazilian politics. Despite their efforts and explanation of the budget redistribution made by Rousseff, the senators are convinced that she is guilty.

Although the film is about Rousseff’s impeachment, the former president is shown as passive and the coup itself is the main character. The appearances of Rousseff in the film are not frequent yet always crucial, such as when she receives flowers from supporters after the deputies’ voting, when she is being interviewed by foreign press, her testimonial before the Senate vote and her farewell speech to her ministers.

As a woman president, Rousseff faced challenges from multiple angles. She had committed many mistakes and she was always harshly criticised by fellow politicians, the media and voters, mostly for being a woman in a position of power. The documentary shows how sexism in politics operates and confirms there is no impartiality in Rousseff’s case. After being impeached two years ago, she is still blamed by the opposition for the problems that are no longer part of her administration.

The polls running in 2017 had Lula as a frontrunner followed by Jair Bolsonaro. Crusading federal judge Sérgio Moro halted Lula’s march to the highest office, finding him guilty of money laundering and corruption. He was sentenced to serve nine years in jail, later revised to 12 years. The case rested on a beachside flat which prosecutors claimed was owned by him but the evidence provided was minimal, fuelling speculations that the trial was politically motivated.

Brazil’s newly elected president Jair Bolsonaro took full advantage of the scandal, portraying himself as an anti-corruption candidate and perpetuating the hate speech against minorities. His free-market far-right agenda rode a wave of public anger towards the past 15 years in Brazil: Dilma, Lula, the Workers’ Party and government corruption. His election can be seen as the continuation of the 2016 trial and the forces it unleashed. Moro – the principal actor in the unfolding drama – has recently joined Bolsonaro’s government as the justice minister.

There are many factors that contributed to the coup d’etat known as impeachment and Ramos with her film manages to explain to the unknowing what is at stake in the Brazilian democracy crisis. The impeachment of Rousseff is key to understanding the current political situation where a country with a predominantly black and poor population still elects a far-right candidate.

The Trial will be showing at IDFA documentary film festival in Amsterdam this week and will hopefully come to the UK next year. If you speak Portuguese, it’s available on demand on Google Play, iTunes and NOW.

All images taken from the film’s official FB page (in Portuguese).
Images description:
1. A cityscape with a black fence running through the middle of the image and the Brazilian Parliament in the background, a striking white building with two tall towers.
2. A middle-aged woman with perfectly done hair and a smart red blouse, at a lectern as if about to speak, with many people standing behind her. It’s Dilma Rousseff, impeached Brazilian president.
3. Black and white aerial shot of the Brazilian Parliament and the big square in front of it, with people wearing red and yellow on two sides of the square, rendered in colour.