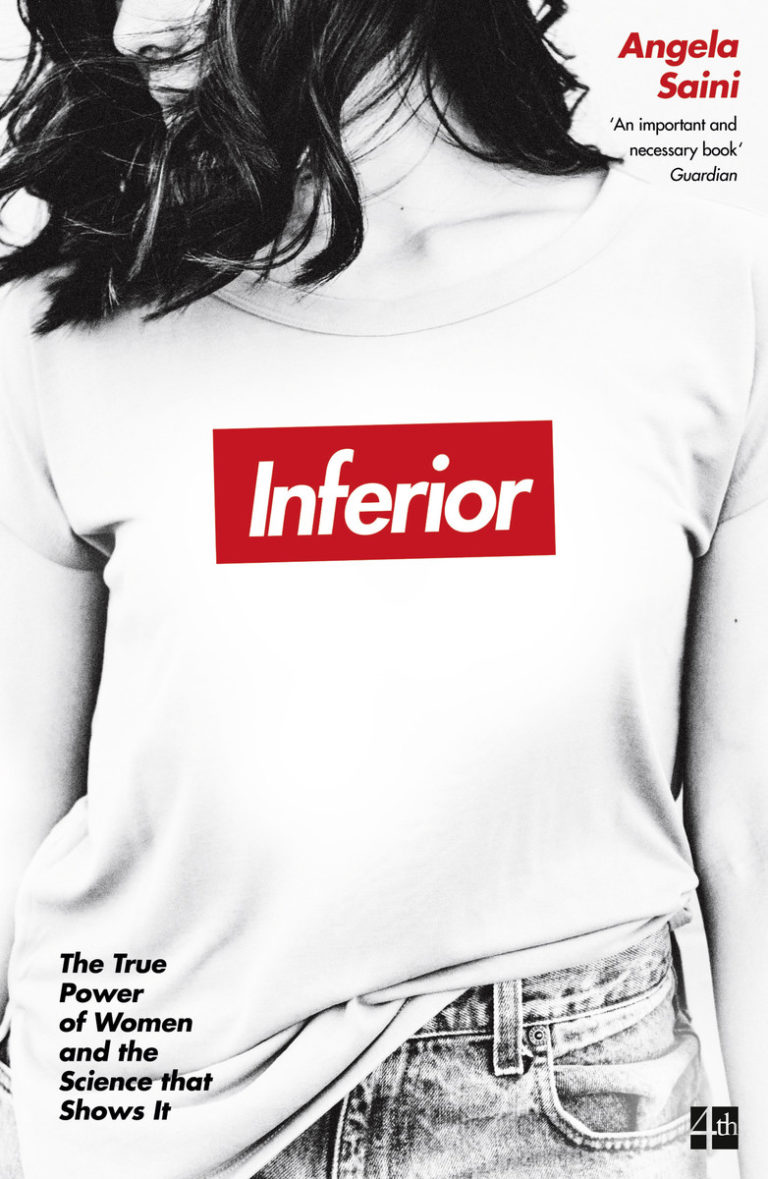 From our early years of education, we are taught that science is a field based on fact and discovery rather than prejudice. When we turn to science for guidance we assume we’ll find an objective truth. It is therefore not entirely surprising that we expect the scientific field to propagate an egalitarian society free from gender bias. Unfortunately, this is not the case. For example, only recently Professor Alessandro Strumia of Pisa University stated in his presentation on gender issues in physics at Cern, Geneva, that physics was “invented and built by men, it’s not by invitation”. Inferior: How Science Got Women Wrong and the New Research That’s Rewriting the Story by Angela Saini – a book which spans evolutionary biology, neuroscience, anthropology, medicine and psychology – critically evaluates the emerging evidence regarding apparent ‘differences’ between men and women that is slowly saving the scientific establishment from entrenched prejudice that has fuelled sexist stereotypes for centuries.

Framing Saini’s analysis are two important and fundamental questions: why are humans so fascinated by uncovering differences between men and women? And of these differences, what proportion, if any, can we attribute to nature rather than nurture? It has previously been well established that there are several biological differences between men and women: for example, ‘biological’ males typically have an XY sex chromosome makeup, whereas ‘biological’ females typically have an XX sex chromosome makeup. However, once we begin to assume that men and women’s bodies function in different ways, where do we draw the line? For example, if all cells in our body are affected by our sex chromosomes, does that mean our brain cells and thus our cognitive functional abilities are different? Scientific publications, beginning with early 18th century anatomists and continuing to the present day, have claimed that female and male brains are different. Furthermore, a plethora of research in the Victorian period demonstrated that women’s brains are on average five ounces lighter than men’s brains. Does this really mean that the intellectual stigmatisation of women is, in fact, not a culturally curated notion, but is instead written into our biology?

The much-celebrated Victorian scientist Charles Darwin certainly thought so. In a fascinating case study, Saini delves into the historical correspondence between Darwin and a feminist activist, Caroline Kennard, and discovers that Darwin believed that “women though generally superior to men [in] moral qualities are inferior intellectually … and there seems to me to be a great difficulty from the laws of inheritance … in their becoming the intellectual equals of man”. Such thoughts, as discussed by Saini, are echoed in Darwin’s published works, which argue that men have faced great pressure by natural selection in order to evolve to impress passive mating females and act as hunter gatherers, which has fine-tuned them into superior physical specimens with superior minds. Women, according to Darwin, are literally less evolved than men. Saini highlights that prominent scientists such as Darwin greatly influenced cultural stereotypes regarding the intellectual role of women in the Victorian period, the consequences of which trickled down far beyond their era. Thankfully, modern science, as Saini explains, is beginning to rewrite this narrative. Paul Matthews, the head of Brain Sciences at Imperial College London, tells Saini that it has now been well-established that brain size is instead correlated with body size, not intellectual capacity.

However, the scientific establishment’s desire to dichotomise men and women’s brains does not stop with brain size: gendered psychological qualities have seeped into popular culture, with pseudo-scientific books such as Men are from Mars, Women are From Venus by John Gray proving tantalising to a contemporary audience. Using Simon Baron-Cohen’s research as a case study, Saini reveals how studies reinforcing sex differences can become global sensations. Baron-Cohen, a famous psychologist and neuroscientist, developed his “empathising-systemising theory” at the beginning of the millennium, which essentially argues that women’s brains are hardwired to be empathetic and men’s brains are built to analyse and build systems. Based upon studies investigating the duration of time that male and female babies look at pictures of a face compared with how long they look at a mobile phone, Baron-Cohen argued that, in the absence of social conditioning, men and women’s brains are biologically and innately different. This finding was popularised simply because it complements predetermined stereotypes, Saini argues (Cordelia Fine also criticises Baron-Cohen’s arguments in her book, Delusions of Gender).

Social psychologist, Cliodhna O’Connor reiterates this by telling Saini that “we tend to interpret new information by categorizing it, using whatever understanding we already have, even if this is prejudiced.” Saini expertly places this in the context of publication bias within scientific literature, which essentially means that scientific journals tend to publish scientific results that appear to be more statistically significant and will gain readership. Thus, studies using small sample sizes and questionable methodology that reinforce cognitive sex differences tend to get published more frequently than more well-designed and well-conducted studies that conclude that there are little, if any, cognitive differences between the sexes. Gina Rippon, a professor of cognitive imaging, discloses to Saini that “people end up seeing only the tip of the iceberg – the studies that reinforce sex differences.” As Saini discovers, the majority of large cohort studies analysing behavioural and psychological differences between the sexes demonstrate small differences if any at all.

As well as covering gendered biological stigmatisation of women and biases within scientific literature propagating gender stereotypes, Saini draws the reader’s attention to gendered social inequalities perpetuated by the scientific field. These include the idea that women represent the more passive, gentle sex as well as the belief that women are more ‘chaste’ than men. Darwin’s long-standing evolutionary theory that men are naturally promiscuous and women are naturally more picky and chaste, continues to pollute the scientific field. As a case study, Saini refers to a paper released in 1989 with the title ‘Gender Differences in Receptivity to Sexual Offers’. The basis for this paper involved directing college students to approach other students of the opposite sex and ask whether they would like to: i) go out on a date, ii) go to their apartment or iii) go to bed with them. The results of the study led to the claim that men are naturally polygamous, and that women are monogamous and “eager for love and commitment”.

Spanning numerous disciplines, Saini effectively argues that what many perceive as an objective and truthful scientific establishment is in fact steeped in sexist stereotypes

Unsurprisingly, the study became an instant hit following publication; after all, it neatly confirmed what everyone believed was true about sex and the sexes. However, researchers Baranowski and Hecht from the Johannes Gutenberg University of Mainz, Germany, saw several pitfalls in the 1989 experiment, and hypothesised that there may be a number of socio-cultural biases resulting in women being less willing to have sex with a stranger compared with men. These include the social stigma attached to being picked up casually as well as the risk of assault. When Baranowski and Hecht repeated the experiment in a lab, they found that upon being shown 10 pictures of the opposite sex, 97% of women agreed to a first date and “almost all women agreed to having sex”. This was evidence, as noted in their subsequently published paper in 2015, that “gender differences [towards sexual encounters] are significantly smaller in a non-threatening environment.” Studies such as this are beginning to unravel the entrenched gender biases hardwired into our culture and, as Saini argues, have the ability to transform society for the better.

Inferior is a powerful and harrowing account of women’s oppression in a seemingly egalitarian and evidence-based discipline. The meticulous research performed by Saini, her effective use of engaging case studies as well as her eloquently structured and balanced arguments allow this work to be interpreted and considered by readers with little or no prior scientific knowledge, without proving reductive. Spanning numerous disciplines, Saini effectively argues that what many perceive as an objective and truthful scientific establishment is in fact steeped in sexist stereotypes, and that “science won’t improve unless we understand that we all have biases and those biases affect research.” Thus, the essentialist scientific practice of assuming the existence of sex differences, and thus subsequently seeking evidence to affirm and predict further sex differences, requires a thorough reboot to demonstrate that we are not as different from one another as centuries of scientific findings have led us to believe.

Inferior by Angela Saini is published by Fourth Estate and is available to purchase as an eBook and in paperback.

The image used is the cover of the book. It shows a mostly black and white image of a person with shoulder-length hair and a T-shirt which is partially tucked into their jeans. The person’s face is not visible, except for part of their profile. The rest is covered by their hair. On the front of their T-shirt is a bright red block with the word “Inferior” in it in white text. In the bottom left-hand corner of the cover are the words “The True Power of Women and the Science That Shows It”. In the top right-hand corner is the author’s name, Angela Saini, and an extract from a Guardian review of the book: “An important and necessary book”.