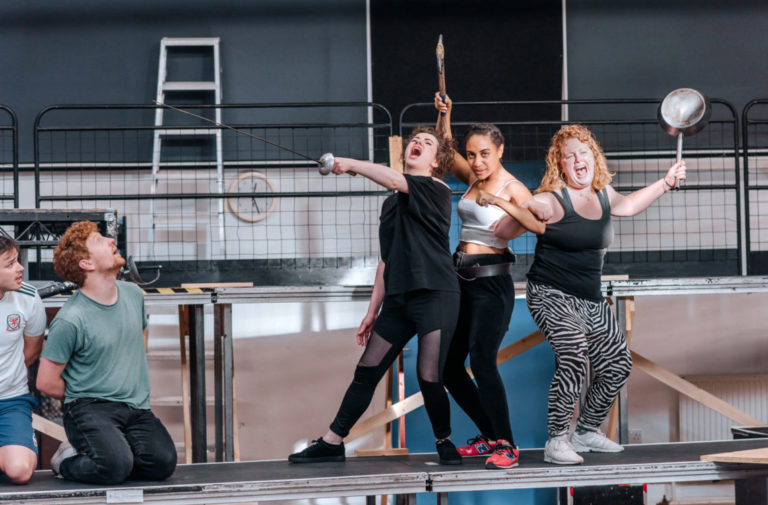 Let’s open with the exciting news that Scary Little Girls and The Heroine Collective have been awarded a grant by the Heritage Lottery to trace the lives and stories of the feminist peace campaigners who kept a camp at Greenham Common for 20 years. Were you a Greenham woman? Do you have a story about the peace camp? Do you have friends or family who lived there or were visitors? If so, they’d like to hear from you. You can get in touch via email, [email protected], and you can also join the conversation using the hashtag #HLFGreenham. For my main job I’ve spent a little bit of time at 101 Outdoor Arts Creation Space which now occupies one of the hangars at the old air force base and I always enjoy thinking about the Greenham Common women when I’m there and their extraordinary achievement.

Christina Murdock’s Dangerous Giant Animals will be at the Tristan Bates Theatre in London from 20 until the 24 November. The play explores the light and dark of the surreal, challenging, and remarkable reality of what it is like to live with disability in a family. This play was on my (very long) ‘possible’ list at Edinburgh this year but unfortunately we didn’t make it along.

Looking ahead to next year, Olga Koch will be touring her Edinburgh Best Newcomer nominated show Fight across the UK. Beginning with a week at Soho Theatre in London in January, the tour will run from 14 January until 23 March. In 2014, Koch’s father got stopped by authorities on the Russian border, which resulted in the most surreal year in her family’s life. Koch will be visiting Bristol, Oxford, Swansea, Brighton, Leicester, Edinburgh, Cambridge, Manchester, York, Coventry, Bath and Glasgow and tickets can be bought here.

In spring next year, Sofie Hagen is going on tour with a double bill of her show Bubblewrap and a book reading from her upcoming book Happy Fat. The tour includes Coventry, Colchester, Cardiff, Salford, Liverpool, Newcastle, Bristol, Birmingham, Leeds, Norwich and Exeter and tickets can be bought through this link. For their alternative Christmas show this year the Space in east London has an adaptation of Louisa May Alcott’s Little Women which they describe as: “a female led, inventive, joyful re-imagining of a modern classic. A celebration of sisterhood and a bittersweet story of family, loss and love.” Little Women runs from 27 November until 15 December.

Sarah Daniels’ Head-Rot Holiday will be at The Hope Theatre in Islington from 27 November until 22 December. The current team are working closely with Women in Prison to ensure that the production’s subject of women’s mental health within the criminal justice system is treated accurately and sensitively. “In a secure hospital for the ‘criminally insane’, three women prepare for the Christmas disco. The parole board’s recipe for early release: put on a dress, wear some makeup… and dance with a rapist or killer of your choice.”

All-female theatre company Paperclip Theatre will be at the King’s Head in Islington on 16 and 17 December with Dandelion. Dandelion is set in Margate in 1988 and is exploring life under Clause 28, the law which made the ‘promotion of homosexuality’ in schools illegal. The play interweaves the stories of 16-year-old Claire, and her teacher Ann, with Claire discovering her sexuality for the first time and Ann determined to lead a ‘normal’ life with her girlfriend – both trying to find a place in a world that’s enforcing their silence.

The feature image is courtesy of the Royal Lyceum and is a rehearsal shot from Wendy and Peter Pan. Shown left to right are: Rhys Whomsley, Laurie Jamieson, Isobel McArthur, Bonnie Baddoo and Sally Reid. The three people on the right are standing on a platform in a rehearsal room, are brandishing a sword, axe and saucepan respectively and appear to be shouting. On the picture’s left are two people kneeling down with their hands behind their backs as if they’re tied up. All are wearing casual clothes.

The first image in the text is courtesy of Suzanne Trewavas Novak and is of the Greenham Common protestors. It shows a line of women holding hands in front of a chain link fence. They are facing away from the fence and are laughing.

The second image in the text is of Olga Koch. She sits in front of two other people who can be partially seen. She is wearing a mauve patterned tracksuit, has long blonde hair, red lipstick and looks straight at the camera.