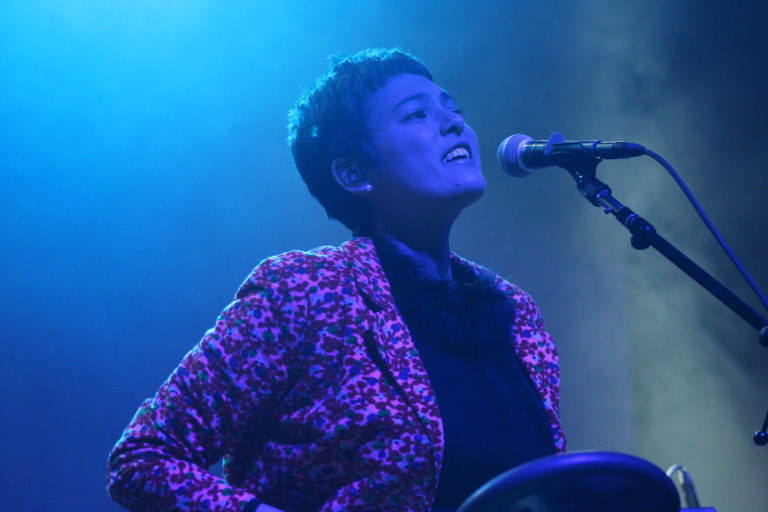 Cazz Blase·15 December 2018
Music
Miya Folick’s debut album, Premonitions, received a download and stream only release in October 2018. There was nothing really in the way of publicity beforehand nor much hint from Folick herself that the album was on its way. As such it’s quite possible that it may have been missed by both potential listeners and critics in the ensuing tsunami of end of year lists. That would be a pity because, while the album’s arrival may have been a low key affair, the album itself really does deserve to be shouted about.

Folick is possessed of one of those voices that needs to be treated with awe. It isn’t enough to say that she is a good singer but it would be fair to say that she has the kind of voice that both startles and stuns in equal measure.

Prior to Premonitions Folick broke hearts with the emotionally raw indie rock of ‘Talking with strangers’. She also released the soaring and ethereal ‘God is a woman’ (not be confused with the Ariana Grande song of the same name). Last summer she delivered a very convincing take on Joni Mitchell’s ‘Woodstock’. As if that wasn’t enough, earlier this year she gave us women’s rage for the #MeToo era with ‘Deadbody’.

Premonitions isn’t as guitar orientated as you might expect it to be. The sound is much more pop orientated and machine led, with occasional moments of guitar based rawness. Her sonic approach feels in line with what St Vincent has been doing lately, but is in no way derivative. While many songwriters write songs about relationships, Folick seems to be particularly good at this.

Opening track ‘Thingamajig’ would be a case in point. It’s a very minimalist song that showcases Folick’s voice, operating near the top of its range here, and the song feels both sonically contained and emotionally vulnerable. “If you wanna be angry, I don’t mind. I’ll leave you alone,” she sings softly, her voice soaring on the following line of melody as she confesses “I am sorry” and “I wanna be out of control.”

While songs such as ‘Cost Your Love’ and title track ‘Premonitions’ combine tension with prettiness, both ‘Baby Girl’ and ‘What We’ve Made’ take the subtle art of the sonic soundscape to another level entirely. ‘Baby Girl’ is a melodic electro soundscape with crystalline vocals that rise as the song unfolds. It seems to be an ode to a close platonic friend, with Folick singing of “Lying on the bathroom floor, laughing our heads off” one moment and “Crying in the alleyway” the next. It is an absolute tour de force, soaring and sublime. ‘What We’ve Made’ meanwhile begins gently but becomes sonically quite complex. It has the tempo of an old world waltz which compliments her voice as it wanders up and down the octaves.

The release of all that pent up rage and emotion is thoroughly exhilarating and, by the end of the track, you’re with Folick and are willing her on

The sophisticated electro pop of ‘Stock Image’ is a song I imagine Goldfrapp would be proud of, while ‘Stop Talking’ is the embodiment of bouncy minimalist pop. It’s incredibly catchy in a left of centre, wonky pop way, which suggests that it is probably great live. It’s certainly guaranteed to lead you out onto the dancefloor.

Another song that is nodding emphatically towards the dancefloor is ‘Leave The Party.’ With its opening horn section and rhyming of ‘pinky toes’ with ‘Cheerios’ and ‘Videos’, it comes across like a really good quality indie take on R&B and is a definite standout track. It really deserves to be a future single.

One track that has been picked up since the album’s release is ‘Freak Out’. It’s whoo-ooh-whoo-ooh keyboard riff, frenetic drum machine and quiet/loud vocals give it a punk pop feel that works as well on daytime 6Music as it would at any indie disco worth its salt. It’s a blissful jump-up-and-down masterpiece and while it doesn’t necessarily best convey what Folick is about, it may well be the entry ticket many prospective fans need.

As previously mentioned, the single ‘Deadbody’ is a strong candidate for unofficial anthem of the #MeToo era: Think Rid of Me era PJ Harvey. Folick begins the song quietly and with icy control. Her vocals are a masterclass in barely contained rage. “Don’t want your money for my silence, I don’t care who knows your name,” she spits. The release of all that pent up rage and emotion is thoroughly exhilarating and, by the end of the track, you’re with Folick and are willing her on.

Exhilarating is not a bad word to sum up this album actually: It is an intensely joyful, sometimes sad, listen. Perhaps not as sonically raw as anticipated, but none the worse for that and definitely a contender for album of the year.

Image of Miya Folick by Friedoxygen via Flickr. The image has not been modified and is a live shot of Folick in which she is smiling, singing into a microphone and playing guitar. It is used according to a flickr creative commons licence.