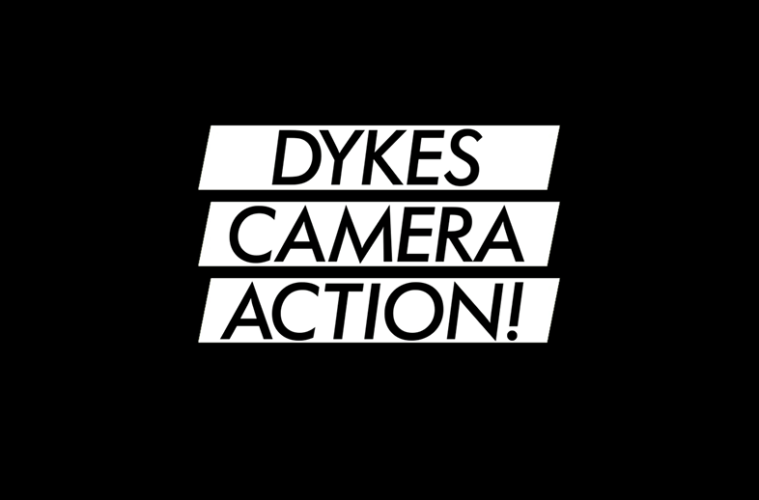 “The definitive story of lesbian-made lesbian cinema from America” is how Fringe! Film Fest announced its screening of Caroline Berler’s Dykes, Camera, Action! on 17 November 2018 at the Rio Cinema in Dalston.Certainly no small promise, but one that the film manages to deliver on throughout its 60-minute runtime as it provides a clear and accessible timeline of lesbian and lesbian-themed American film, while also showcasing the work and opinions of today’s leading lesbian and bi filmmakers. Before the screening, a four-minute short by filmmaking duo Barrelstout (Bev Zalcock and Sara Chambers) plays, called My Name is Lola Lola. With clear references to Weimar cinema, the short shows a group of teddy bears wreaking havoc in a school as well as putting on a nightclub act. The short is silly, but also shows how ingrained certain tropes have become in lesbian cinema – who isn’t familiar with the stern female head teacher, or the seductive after-hours dancer?

At a first glance, Dykes, Camera, Action! looks a bit like a lesbian version of Rob Epstein and Jeffrey Friedman’s The Celluloid Closet, and there is no doubt that the former film is built on the ground that the latter paved. Even though The Celluloid Closet was made in 1995, it is still often seen as the authoritative voice on what belongs under the label “gay and lesbian cinema” and what doesn’t. Initially intended as an overview of gay representation (both overt and coded) in Hollywood cinema at the time of release, it has now become a classic of lesbian and gay cinema in its own right. There are many aspects of The Celluloid Closet that were commendable at the time of its release, including its incorporation of personal stories of lesbian and gay media creators, and the views of famous actors openly defending the gay roles they played. However, its limited focus on the overt representation of lesbians has always struck me both as a reflection of how few mainstream films have tackled lesbian desire, and of how much the category “gay and lesbian” still tends to default to the masculine. Dykes, Camera, Action! provides some of the missing pieces of this diverse puzzle. Another thing that makes Berler’s film relevant, and even necessary, is the massive legislative and cultural change that has happened since the release of The Celluloid Closet. Some two dozen countries have legalized same-sex marriage, there have been major Hollywood films with leading gay characters and coming out does not necessarily have to mean career suicide for working filmmakers and actors. These changes have created a world in which more artists are able to be out, and more stories by and about LGBT people can be told while, at the same time, the proliferation of such stories arguably accelerates the change.

This is also where Dykes, Camera, Action! truly differs from The Celluloid Closet: because there are simply more out artists in film, and those who are out are now also able to reach a wider public, the documentary can talk about both the activist potential and effects of lesbian filmmaking. Covering both experimental filmmaking and the representation of lesbians in the mainstream, the film makes the connection between politics and art undeniable. Documentary footage of Lesbian Avengers marches teaches a modern-day audience as much about US lesbian history as it does about the representation and archiving of this history.

This is the perfect atmosphere for a documentary like this – in a community space, at a community event that seems ripe with artistic and activist potential

One particular issue that is brought up is the historic lack of mainstream lesbian-themed films that end happily. Several of the filmmakers cite this as an explicit reason for making the films that they ended up making: “We’re sick of being depressed when we see gay films”, proclaims actor Guinevere Turner in archive footage from the promotion of Rose Troche’s Go Fish (1994). It is exactly the positive, proactive tones that make this documentary so effective. There is a pervading sense that if history and mass media are not on your side, there will always be communities of people who take it upon themselves to make it be on their side.

The experiences discussed by the filmmakers featured in the documentary (the first lesbian celebrity crush; the first disappointment at a lesbian film ending unhappily; the first time watching/creating a film truly aimed at a lesbian audience) are relatable to a contemporary UK activist audience, which is evident in the reactions from the floor. Everyone laughs at the same time, people understand the references and everyone makes the right noises when heartbreak is brought up. The panel talk after the screening is not so much a didactic exercise – as film panels can often be – as it is a conversation between panelists and audience. Filmmakers Lisa Gornick, Harley Yeung Kurylowski, Bev Zalcock and Sara Chambers all invite the viewers to watch their films and take part in their upcoming projects; they also seem to be as interested in their audience as the audience is in them. One can’t help but think that this is the perfect atmosphere for a documentary like this – in a community space, at a community event that seems ripe with artistic and activist potential.

Pippa Sterk is a Dutch writer of fiction and non-fiction, based in London. A film and sociology graduate, in her writing she is always concerned with the relationship that marginalised groups have to media