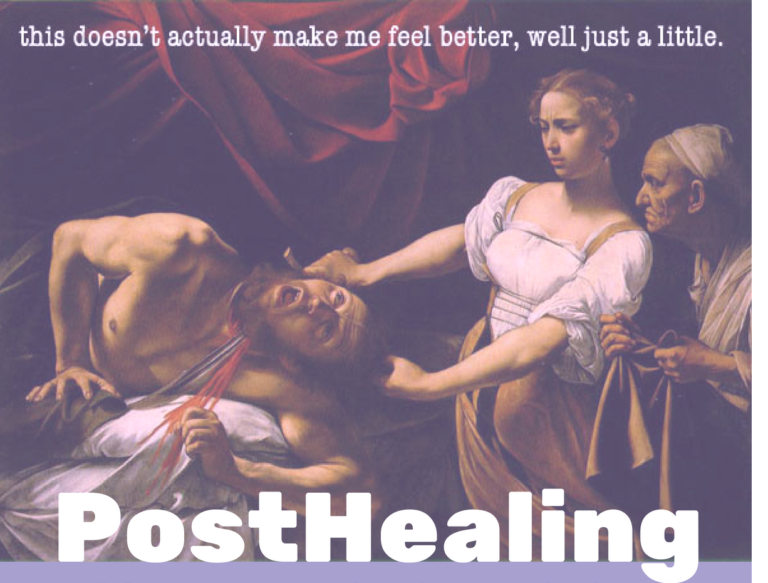 A new space for exploring violence, art and community Based on Tumblr, PostHealing is Girl Museum’s new community space for making and sharing art after experiences of violence. Launching the project, I have become more and more aware of the beautiful and awesome resilience of human beings and I truly believe that all that power is amplified when we come together. So if you’ve experienced violence (including child abuse, domestic violence, sexual assault or violence of any kind) and you’re interested in trying to make some art, then we want you to shape this project.

All over the world, people are facing violence. Working with girls and young women at the Girl Museum, we are particularly aware of child abuse, domestic violence and sexual assault, all of which are far too often shrouded in silence, with violence sustained by cultures that don’t respond. Grasping the extent of the issue is hard, since figures can often only include those who disclose their experiences and studies are usually limited in location. WHO estimate that 470,000 people die as a result of violence in total each year, while a third of women have been assaulted in their lifetime and 1 in 5 women and 1 in 10 men were sexually abused as children. The problem is certainly global. But Girl Museum believe that art can help us heal. By sharing our art, we can go some way towards helping ourselves and our world. We can change our response to experiences of violence by speaking out, forming community, developing creative expression and celebrating our power. We are stronger when we come together.

To help provide inspiration and illustration for how art can help us, we’ve been sharing examples ‘from around the web’ and ‘from around the world’ that tackle subjects of violence: from a professional artist’s installation piece on human trafficking to a teenage songwriter’s music inspired by her own experiences with abuse. The sheer volume of examples out there gets overwhelming and in researching artwork, I have had to confront the scale of the problem in a way that demonstrates the suffering involved more than any statistic. But I am also inspired. I have been exploring everything from oil paintings to R&B, from contemporaries of Caravaggio to attendants of the Women’s March. Each has confirmed that people have the power to respond to even the worst of experiences with creativity, courage, defiance and optimism.

It’s also shown that when it comes to violence, there is no ‘correct’ response. Now that the space is set up, we want to offer it over to anyone who might need it, so we’d love you to get involved. Whatever your experiences of violence, regardless of whether you’ve ever even picked up a pencil before, we would love to see your artwork and facilitate conversation or even collaboration. We want you to shape the space so that it’s right for those who use it.

If you want to get involved anonymously, you can – either by sending submissions to [email protected] or by using a pseudonym username on Tumblr. Otherwise, it can be as simple as posting your work with #PostHealing on any social media platform.

To get things started, we’re going to be hosting monthly zines, collecting together the work that’s been shared and exploring particular themes. December 2018’s focus was on ‘Family’ and through January we joined in with the month of Human Trafficking Awareness. Through February, we’ve been gearing up to One Billion Rising, a mass action campaign every February against the violence suffered by over one billion women and girls. 2019’s campaign is around systemic violence, seeking to promote an intersectional understanding and response, so we’ll be looking at how violence is affected by a wide range of issues, including racism, fundamentalism, displacement, poverty and climate change.

So if you’re interested, please do pick up a pencil (or a crochet hook, smartphone or guitar …) and head to www.posthealing.tumblr.com! We’d love to see your response.

The image used is an invitation to get involved in the PostHealing project. There is a painting featured which is Caravaggio’s depiction of Judith beheading Holofernes. The caption above the painting reads ‘this doesn’t actually make me feel better, well just a little.’ Below the painting it says: ‘PostHealing. Submit your artwork and get involved at: https://posthealing.tumblr.com, [email protected], #PostHealing’.