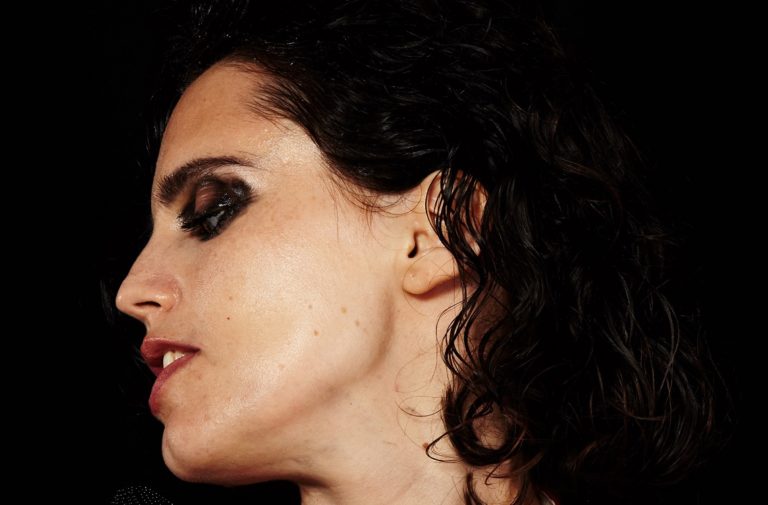 A stalwart performance from the first lady of shredding: Anna Calvi

Thursday’s sold out London Roundhouse show marked the final night of Anna Calvi’s extensive three-part European tour that began in early October 2018. Prior to this, she undertook a UK and Ireland tour throughout September, while February sees a tranche of further French dates. With such a prolific touring schedule, it’s hard to doubt her commitment to her craft.

Coinciding with the release of her third album Hunter, which was released to near universal acclaim at the end of August 2018, Calvi has evolved to become a bolder artist who’s unafraid to take risks, speaking eloquently about gender, queerness and power in equal measure. It’s unsurprising, therefore, that so many women and queer people have taken her to their hearts. Her musical output, which is consistently thoughtful and accomplished, has also won her accolades from Uncut reading muso men of a certain age, who are rightfully awed by her virtuoso guitar skills.

It’s these men who cling to the edge of Calvi’s catwalk stage set-up at the Roundhouse. From my seat at the front row of the circle, it’s interesting to see this collection of white, balding heads gazing up in adoration at Calvi, who alternates between the main stage and the runway, which emerges from the front of the stage, splitting the audience in two, and enabling her to get up and close and personal with the crowd, which she frequently does: dropping to her knees, crawling and staring at incredulous punters with an animalistic vigour.

The evening is the ultimate showcase for the power and range of her voice, with screams and moans that give me goose bumps Calvi’s live shows have become the stuff of legend, with drama, pitch-perfect vocals and a balance between poise and an unabashed release of energy. Tonight’s performance is no exception. The extent to which her remarkable voice matches up to – and arguably exceeds – her recorded output is astonishing. This is beautifully realised in ‘Don’t Beat the Girl Out of my Boy’, infamous for the rapturous roar she releases two thirds of the way through, which she nails – and then some. The evening is the ultimate showcase for the power and range of her voice, with screams and moans that give me goose bumps. It’s impossible not to be moved by her vocal ability.

If cock-rock is the antithesis of everything contemporary music purports to be working towards, Calvi provides the perfect antidote. Throwing back her head, ravaging her guitar and adapting the swagger and raw energy that was once the exclusive province of hair rockers, makes for a thrilling performance that’s guaranteed to raise a smile. Watching her fall to her knees and rock back and forth, while shredding the shit out of her guitar, is entrancing. Props also need to go to her drummer, Alex Thomas, who keeps a thundering beat throughout.

On the flip side, Calvi strips it right back for many of her slower numbers, such as ‘Swimming Pool, leaving just guitar, vocals and minimal backing percussion. It’s mesmerising and even the frustratingly noisy crowd at the bar manage to keep a reverential silence throughout this track.

Red lights, smoke and strobe lights all contribute to the sense of drama that permeates Calvi’s performance, which culminates with a cover of Suicide’s ‘Ghost Rider’. It’s no exaggeration to say that as sweet and strong as Calvi’s voice is, I’d happily sit and simply watch her hammer the hell out of her guitar. When I spoke with Calvi in October last year, she said that she wanted to make an album that sounded, “strong and raw and passionate.” If tonight’s performance is anything to go by, her mission has been flawlessly accomplished.

The image is a head and shoulders publicity shot of Anna Calvi, a white woman with dark hair. Her face turns away from the camera and her heavily made-up eyes look down. Her black and red shirt is open to reveal black text written on her body, which has been smudged. Picture by Maisie Cousins and shared with kind permission from Stay Golden PR