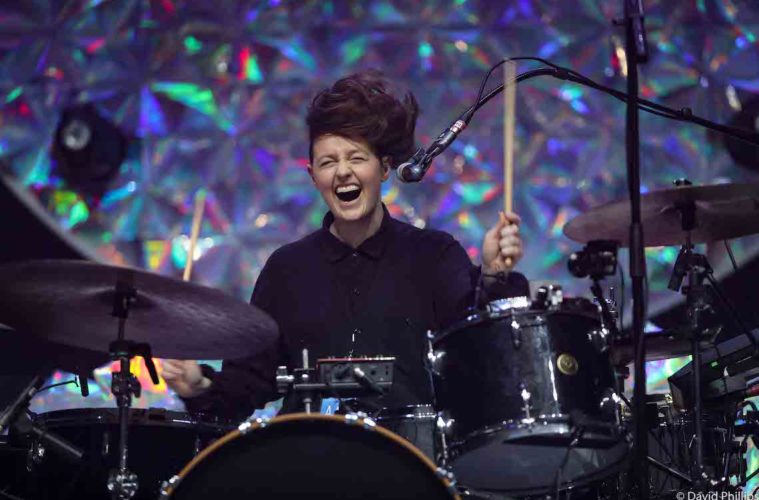 Burning Salt return with debut album Automatic Lullaby, a project that represents a change of direction for Hannah Hull. Kirsty Folan speaks to her and collaborator Daisy Palmer about the album

Following on from the success of the EP, Dirt, which drew on the archives of the notorious Holloway Prison, Hannah Hull’s outfit, Burning Salt have released their debut album, Automatic Lullaby.

The album has been a different writing experience when compared to the observational approach taken by her previous EP which was made as part of an artist residency. Automatic Lullaby represents a step out of Hull’s comfort zone as a socially engaged arts researcher. It’s a self-portrait made up of songs written in her 20s which no one was ever meant to hear.

Automatic Lullaby is written predominantly on guitar, and there are some wonderful layering of parts on the album. The opening eponymously titled track emulates the sound of a music box with a steady double bass, while the guitars, which cut in later, give the track bite. Perhaps this driving force is also due to the addition of percussionist and drummer Daisy Palmer to the band, who has previously worked with Paloma Faith and Goldfrapp.

Catching up with Hannah Hull and Daisy Palmer was a great opportunity for me to discuss the experience of women musicians in the male-dominated industry as well as find out more about the album.

Previously, you have worked on many intriguing situation-specific art projects including your EP, Dirt. How does it feel to release songs that you wrote only for yourself, and that expose more of yourself and your vulnerabilities?
HH: It’s funny, I’ve just remembered something […] At art school I was encouraged by a tutor to put more of myself into my work […] I guess they could see that the social themes I was working with had a deeper resonance for me. I think the Dirt EP really exposed this, with my words and the words of the women of Holloway Prison merging.

I’ve always trod the line between my own motivations and the needs of others very carefully, but the Dirt EP blurred this line and revealed a much deeper solidarity. I’m slowly learning that exploring and exposing my own vulnerabilities can actually be very precious for others. I previously regarded my songs as too self-involved, which is why I have kept them private for so long. I’m 33 now, and have only been performing for two years. All the songs on Automatic Lullaby were written in my 20s, privately, and only shared with a handful of friends.

There was definitely a different energy in the room when Daisy was in the studio, and I really enjoyed it

How has your songwriting developed since you wrote these songs, and what led you to the decision to release them?
HH: I actually think the main obstacle for me has been making sure that my approach doesn’t change, even though I know people will now be listening to what I write. I’m trying to keep that songwriting space as honest and free from affectation as I can. Of course thematically there’s a development (some say my newer songs seem more hopeful, though I’m sure they are far from cheerful!), and now I mainly write on piano rather than guitar. But the function is the same: catharsis, working things out, putting words to the confusing in-between spaces, trying to conclude the inconclusive. I couldn’t really say if there was any technical development, as I have no idea what chords I am playing on the piano. Probably there is some. I use the black keys more […] ha!

How does your visual art, and your academic background influence your songwriting?
HH: I think it’s more the other way round […] I have more to learn from my songwriting, which comes from a deeper space than my art and academic work. I trained in art at Goldsmiths, and the approach was heavily conceptual and didn’t seem to indulge the poetic or expressive. I felt there was an air of dismissal around any work that was ‘confessional’ and that I had to defend my work with logic, reason and hard edges. I am more vulnerable sharing my songs than I am my art or academic work, and my songwriting process is much more mystical than anything I would have previously felt comfortable defending in the world of art or academia, but I am learning how I might.

I am aware that there is a movement towards a more emotions-based approach to academic research and this interests me greatly. Of course art and academia are male-dominated arenas, as well as music.

I’ve seen some alarming statistics that women make up only 14% of PRS [Performing Right Society] membership, so I’m interested in how you and Daisy both got into music? And if you have any thoughts on why this gender gap exists?
HH: Well I think we can pretty safely say it’s because of the patriarchy! Women songwriters, artists, novelists, thinkers have been overlooked – if not actively discouraged – for centuries.
I was pretty shocked when I realised everyone who had worked on the musical side of the Dirt project was male. In a way this is beautiful, as it is a project honouring women, but it’s made me realise I need to be much more proactive about keeping things in balance. I’m looking for a female engineer for the next album. I love the men I work with to bits and have never felt a gender divide. But there was definitely a different energy in the room when Daisy was in the studio, and I really enjoyed it. There’s a lot of subtlety that’s hard to describe, but I personally prefer diverse, balanced environments. I think it’s healthier.

I love the work of Book More Women, a social media campaign that takes music festival bill posters from around the world and deletes all the acts that don’t have at least one female member. The results are really shocking, very revealing. The bills end up practically naked.
I’m really interested to hear Daisy’s thoughts on this, as she’s much more experienced than me.

DP: As Hannah says, the reason for the gender gap is totally the patriarchy, but we will smash it eventually! I got into music by playing with people that were older/better than me and I was usually the only girl. This didn’t bother me though, I just enjoyed playing music and didn’t feel like there was any real difference between me and the chaps in the band. I did always feel like I had to prove myself more than other drummers that were boys, but I think that just made me more determined to be a better musician. I think it’s important for young women to be actively encouraged to play instruments and to be in bands – girls are still implicitly told by western society they are not entitled to be expressive in the same way that boys are allowed to be. In addition to that I also think that it’s necessary for art to be conceived in a neutral environment containing equal amounts of women and men participants and that younger musicians need to witness this and see it as ‘the usual’ rather than the inclusion of women artists being seen as ‘unusual’.

Be true to yourself, and forget the rest

What is your experience of working in a male dominated industry? Do you feel that you are treated differently?
HH: I’ve worked with a lot of men, and they’re beautiful, talented, soulful men. They’ve treated me very respectfully, so in my experience this is definitely a lingering historical problem and not an issue with men themselves, or at least not the men who are drawn to working with me. Personally I don’t overly identify with being a woman, and I think the gender binary is one of the biggest piles of crap we were ever sold, but it’s important to recognise there is a major discrepancy going on that needs addressing. I do fear that the deeper I become involved in the music industry the more visible its inherent gender issues may become. I feel wary. I’ve read a lot of music biographies that have led me to feel so! DP: I agree with Hannah where she states that she doesn’t overly identify with being a woman, but I also feel that the deeper I get into the industry, the easier it becomes as a woman. Once people learn that you are strong and confident, no one would even dream of patronising you, whether they themselves are male or female – as you know it works both ways, women can be allies of the patriarchy just as well as men can be feminist. Also as a session musician, you get to a point where everyone is just as good as the next person, so I find I’m treated the same as anyone else, male or female.

Daisy, you’ve worked with many big names in the industry. Do you think that touring is more challenging as a female musician? What has been your best and worst experience on the road?
DP: I can’t see (and have never felt that there is) a difference between touring as a woman or as a man. All that matters is that you are surrounded by lovely people, hopefully a good mix of male and female, and that you feel respected. My best experience is playing at Hollywood Bowl with Goldfrapp, and the worst is being left behind in Hamburg (by an all female crew!) and missing a flight … well OK that was my fault.

Finally, do you have any advice for aspiring women musicians and artists?
HH: Take all the advice you can get, and go with what resonates with you. I’ve found that there are a lot of opinions to navigate in the music world, and really no one knows what the hell is going on. Also, I have a friend who makes sure that after they’ve read a book written by a man, they read one written by a woman, and so on. I’m trying to follow this in terms of who I take advice from in music. And there’s definitely a lot more men available for advice-giving than women. Other than that, be true to yourself, and forget the rest.

Actually, I have one more piece of advice: write a song that no one is ever going to hear. This is probably your true voice. Use it as a reference point.

DP: Be confident in your skills and be true to yourself as an expressive artist. Also, don’t be afraid to be ambitious!

Automatic Lullaby is out now and is available for download from Burning Salt’s website. It can also be streamed on all major platforms.