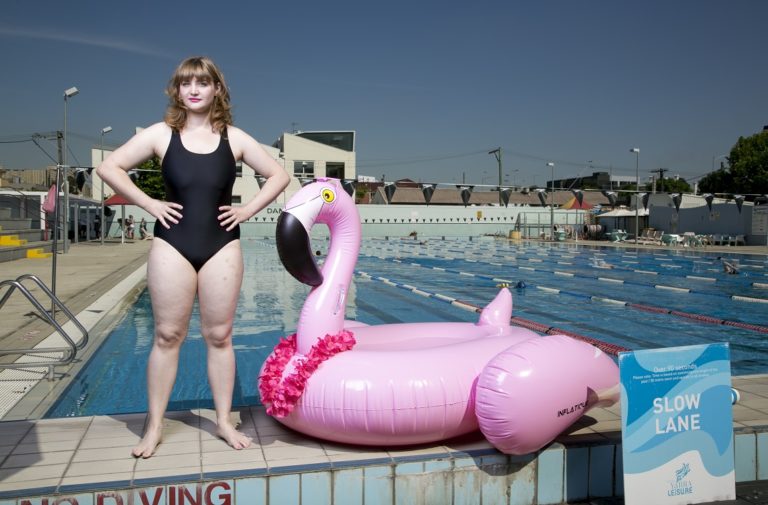 All aboard Bob’s Blundabus: the venue for this year’s offering from Australian comic, Laura Davis. It’s a squeeze, it’s hot and there’s noise bleed from outside, but Davis manages to make us feel as cosy and safe as in any of the big, expensive venues. Davis is a true Fringe spirit with true Fringe warmth.

Davis has a confidence about her that lends itself to theatrical poise, as in many of the best comics. Yet one of the other things about Davis is she doesn’t take herself too seriously. She commands an audience, yes, but she gives the appearance that she knows not how or why, which leads to her unique delivery and expertise.

Topics this year include moth-identification groups on Facebook, feminism and protest. There is real heart to her work without her demanding it of you. It’s a wonderfully warm and inclusive show, though she does keep you slightly at arm’s length. I almost want to learn more of her inner workings, as we did in last year’s show, Ghost Machine, but it must be said she feels more comfortable in this setting. She lets us know that the bigger venue last year did her no favours, and she prefers the audiences at the Free Fringe. There can be no doubt that Davis loves her craft, and has it honed to a tee. This is a self-assured two-hander from rising stars of the comedy circuit, Chloe Green and Ella Woods. Each is doing around 25 minutes of material to help develop full shows for future years, covering topics such as nudity, sexuality and politics. Both comics have their own unique style, yet both are feminist powerhouses, and the audience instantly feels lifted out of the late-night Fringe daze as we enter the room to them dancing, cheering and welcoming us in.

Ella Woods opens the evening, developing material for her new show about female nudity. She appears at ease on stage despite the possible awkwardness of the subject; her treatment of it is interesting, highly relatable and rarely spoken of in these terms. There is certainly a good show being built here.

Next is Chloe Green, one fifth of the hit queer comedy collective, The LOL Word, who is impossible not to like. Friendly, fun and high-energy, Green discusses her time working at the Labour Party, her sexuality and upbringing in Dorset. Favourite lines from the evening come from her father’s advice for late-night field partying, and her Mum’s reaction to her ‘unfeminine’ appearance.

It’s still a work-in-progress, yes, but the seeds have been planted – watch them grow. Perhaps known best for her appearances on The Guilty Feminist podcast, Jess Fostekew is a damn funny woman. In Hench, she stands on stage in her gym kit, telling us stories of both insecurity and pride regarding her body shape. She is likeable, articulate and defiant, and it’s certainly refreshing to hear genuinely honest material about the true ups and downs of body positivity.

Particularly relatable is Fostekew’s mother’s inability to understand why it is OK not to carry yourself as a typically ‘feminine’ woman. This is underpinned by a hilarious recounting of the traumatic birth of her son, where the most classically female experience is presented to us as the raw and ungraceful event that it really is, all the while keeping the crowd laughing.

This is modern feminist comedy at its best, and it’s great to be in an audience that feels accepting and on-board. There are no teary-eyed moments here, no Fringe-y sad point at 40 minutes; this is just bloody good comedy with a relatable twist.

Ultimately, I wish I’d been able to see this show at 15. It might have saved me years of worry.

Everything that shouldn’t be in a live show is here, and they are proud of it: the three wild-eyed performers rotate to tell us all the “things you shouldn’t do on stage”, most of which are seen here It’s one of the strange things about the Fringe that because you’re seeing so many shows there are odd coincidences and parallels that appear. Yukon Ho! is one of the two shows I see back-to-back that contain a triumphant can-can (I don’t think that’s much of a spoiler). In other ways though, the show is entirely unique.

Solo performer Jennifer Irons combines spoken word, dance and song in a show she co-wrote with Robert Churchill about the north-west territory of Canada, Yukon. Telling the story of her personal history with the area, along with its history as a whole, she builds up a brilliant image of an area which is empty and beautiful, but where drinking and drugs are rife and death waits round every corner.

In the big empty space of the Upper Church in Summerhall, the show looks gorgeous. Designer/Maker Annie Brooks has done a terrific job packing all the show’s set and props into one massive back-pack, which Irons carries onto the stage with her in the opening scene. Irons is a great dancer and carries the show’s changes of pace and emotion incredibly well. It’s a beautiful show. This is a show that puts high stakes and brutal honesty at its very heart, creating a mind-blowing, spellbinding concoction of punk, theatre, humour and physicality. In Bed With My Brother are a theatre group like no other, taking risks left, right and centre, and no more so than with this show, Tricky Second Album.

It starts with the statement that the KLF once burned £1 million for no reason, and asks us why they did it, before saying that In Bed With My Brother started making a show in 2017 and they don’t know why they did it either.

Everything that shouldn’t be in a live show is here, and they are proud of it: the three wild-eyed performers rotate to tell us all the “things you shouldn’t do on stage”, most of which are seen here. It’s pure chaos, so not for everyone, but if you stay the length of the show you will be truly rewarded.

Beneath the affectation, there is a massive heart and soul here, beating loudly for all the performers who are struggling with mental and financial worries in the current climate. All Fringe I have wanted to be punched in the gut by a show, and not until Tricky Second Album has it happened. Unflinching, raw and uncomfortably real, this show is a risk worth taking. Everyone in the UK knows that the weather is being quite strange right now. From almost 38-degree heat in London a few days ago, I’m spending my time in Edinburgh desperately attempting not to be washed away by flash floods. Ironically, I spend the worst day of the rain so far in a makeshift eco-friendly theatre The Greenhouse watching Daphne or Hellfire which uses ancient legends to challenge what we know about our present.

Daphne or Hellfire is an adaptation of the Daphne and Apollo myth. We follow Daphne, a woman devoted to saving the planet by any means necessary, battling a society that is predisposed against both the environment and women. The chemistry between Caitlin Morris (Daphne) and Henry Roberts (Apollo) is touching and adds realism to Daphne’s struggle of wanting to create some change while attempting to have some form of a real life as well. Roberts’ Apollo is just as useless as his Greek counterpart, but underneath the selfishness and overbearingness is a man who loves his partner and wants to change things too.

Accompanied by beautifully simple live music and the unexpected velocity of the rain outside, the audience is transported to Daphne’s own mythical world where it is possible to reverse the climate damage we have done. We just need to be better at owning up to it.

The feature image is of Laura Davis by James Penlidis. It shows David standing at the edge of an outdoor swimming pool wearing a black swimming costume. She has her hands on her hips and is looking directly at the camera. Next to her on the side of the pool is a massive inflatable flamingo with a string of pink flowers around its neck.

Image 2 is the publicity image for Chloe Green and Ella Woods: VENN. It shows a smiling headshot of each performer in its own a circle. The two circles slightly overlap each other and letters making up VENN are superimposed in green around them. The names of the performers are at the top and bottom of the image.

Image 3 is from Hench and is by Idil Sukan. It shows Jessica Fostekew lifting a massive dumbbell. Everything is red: the studio, her weightlifting outfit and the headphones on her head. She is covered in chalk and looks seriously and directly into the camera.

Image 4 is from Yukon Ho! It shows performer Jennifer Irons doing the can-can on stage. She is wearing a can-can outfit: full frilly skirt, fishnet tights, feathers in her hair. She is kicking her left leg up nearly vertically and looks as if she is shouting “ooh” at the same time. Some stage lights can just be seen behind her.

Image 5 is from Tricky Second Album and is by Matt Austin. It shows someone wearing dark glasses and a dark anorak in front of a dark background. The background takes up a lot of the image. On the front of the anorak is written: “we have already sold out” in white capitals.

Image 6 is the publicity image from Daphne, or Hellfire. It is a drawing of what looks to be a woman’s face facing the right of the image. Her hair is streaming backwards and the ends of it morphs into the shape of bare trees with birds flying around them. The words “Daphne, or Hellfire” are in capitals at the bottom of the image. The drawing is in black and orange on a white background.