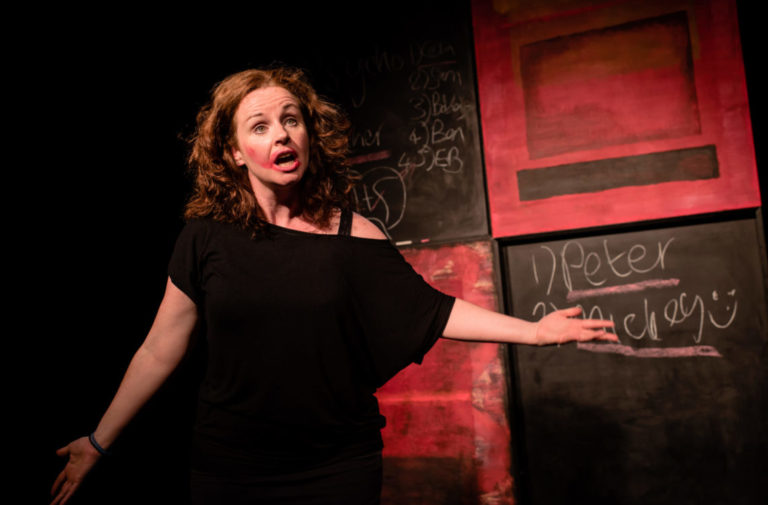 Honey is a funny, fast-paced one-woman show about a journalist and single mother trying to juggle her four children, ex-partners, not always supportive friends and a distant mother… as well as an on/off relationship with psychotherapy. Her ups and downs with these characters drive the play to a twist of a conclusion.

The plot is told through Honey’s point of view as she takes to the stage to tell us her life story and the lessons she has learned from her relationships with men. However, it’s Honey’s (sometimes dysfunctional) relationships with friends and family which are the main themes, especially intergenerational difficulties between Honey, her mother and her teenage daughter Celia. Judgemental attitudes towards single mothers, the complexities of female friendships and the tension between being a career woman and having a family are briefly explored. There’s a bit of mystery – what is it that Honey’s psychotherapist keeps wanting her to talk about? What is her mother keeping from her, and are her friends’ lives as perfect as she thinks? However, Honey is a realistic comedy and the storyline is firmly grounded in present-day Edinburgh.

If you like the TV series Miranda, you’ll love Honey. Think ‘chick lit’ but grittier, grown up and in the form of drama. And it’s funny. Watching Glory Die is inspired by the true story of Ashley Smith, who was imprisoned as a teenager and died by suicide in her prison cell while the guards were watching. The show is based on a book, also written by Judith Thompson the playwright, and is about three women trapped in a crushing prison system.

Glory is sent to a youth facility for throwing an apple at a postal worker, but this soon turns into many years of imprisonment with periods of solitary confinement. Rosellen is Glory’s adopted mother, devastated by her daughter’s incarceration and shamed for raising the daughter she has. Gail is the prison correctional officer with a fluctuating heart: she has a humaneness hidden behind the mask she puts on at work. The narrative shifts between these women, each helpless inside their allotted box and each fighting a demon of one kind or another – Glory is hallucinating and going further into mental illness, Rosellen is helpless even as her daughter is suffering, and Gail’s job is hard.

Watching Glory Die is a show that is devastating and hard-hitting. It serves as a painful reminder of the lives lost to the prison system and those affected by it, but most importantly that each one of us is complicit by our silence in the face of the loss of many Glory’s. In the show, Glory insists that she will hold on to her memories whatever happens, and this show is one that will remain etched in both my mind and memory for a time to come. My Mum’s a Twat (Theatre)
Until 25 August, 17:30, Summerhall
Reviewed by Archanaa Seker

Anoushka Warden takes to the stage casually and she is dressed, one can suppose, as herself. She says she is no actor and then tells us that her mother wasn’t always a twat.

Over the next hour, Warden has the audience splitting our sides, as she talks about losing her mum to a cult. We hear about her family, her many half-siblings, the dogs and plenty about the “Heal Thyself Centre for Self-realisation and Transcendence”. We hear about friends, drugs, men, music, hurt and Warden’s own healing that has nothing to do with the cult – she finds it along the way for herself. The show has answers to questions we may not even realise we have such as: “what do you take when you run away?” and “how can you have your way at Christmas?”

In My Mum’s a Twat Warden builds a picture of her world, and I walk away thankful that she became a performer instead of a cult member, and that her experiences sparked the seed of this spirited show.

At one point fairly early on, Croft winds a roll of kitchen foil around herself and then stands over a fan which blows it off; the shapes that the foil makes as it streams behind her are lovely Through anecdotes ranging from the silly to the serious Chameleon touches on a range of subjects including girlhood, make-up, work, mental illness, dating and harassment. Plummer keeps it light with a perfected routine, and this helps get the message across strongly. So, when she declares that: “we’ve come a long, long way together”, especially after making music together at the very end, there’s a twinge of sadness – like saying goodbye to a friend, and in this case, some gorgeous outfits too. Xiomara Meyer and Tamalynne Grant play Olivia and Jessica, two artists who may soon be buried under unpaid bills. One is a writer and the other an actor, both on the brink of fame, but only if they each make a compromise. Olivia must change her name because horror written by women authors does not sell; Jessica must let herself be reduced to her measurements to land a role.

The Struggling Life of an Artist is timely and rings true for women who are trying to break into highly competitive male-dominated industries. Meyer and Grant deliver skilled performances in this part-memoir, part-coming-of-age show. They stubbornly sing, dance, narrate and play their way through privilege and the patriarchy, security and success, and speech and safety, to emerge on the other side proud and having shed their shackles. The scene changes take a bit too long and it’s obvious that it’s a low-budget production, but to be fair, the disclaimer is in the title! They might be poor in terms of money, but they are rich in honesty and a delight to watch, and as struggling artists chasing a dream, they certainly deserve an audience. Working On My Night Moves (Theatre)
Until 25 August, 21:55, Summerhall
Reviewed by Lissy Lovett

Working On My Night Moves leans more towards the art end of performance art. I can’t say that I entirely understand it or what it means, but I think that might be OK. Theatre-makers Julia Croft and Nisha Madhan spend an hour intensely moving things around the theatre – hanging chairs in mid-air and raising and lowering lights. The space is always very dark, and there’s a complicated sound design that includes snatches of popular songs and sounds coming from different places in the space – most notably a speaker attached to Croft’s waist (I think).

The audience begin Working On My Night Moves standing on half of the stage and we only move over to the seating bank about five minutes in. Unfortunately, as I am fairly short and am near the back of the group, I can’t see anything for that bit – perhaps raked seating is a symbol of the patriarchy (the ancient Greeks had it after all) but it’s useful nonetheless!

There are some beautiful moments. At one point fairly early on, Croft winds a roll of kitchen foil around herself and then stands over a fan which blows it off; the shapes that the foil makes as it streams behind her are lovely. As is another image made with balloons later. The seeming chaos left on stage at the end reminds me of the yin and yang idea that women represent disorder, but then although it looks a mess that’s exactly what they intended, so maybe it’s just a new order instead. I also think about the lies I’ve often been told that women aren’t ‘practical’ or that we lack spatial awareness.

Sightlines aside, Working On My Night Moves is a mesmerising experience which stays with me long after the performance has ended.

Image 1, the feature image, is from Honey and is by Mihaela Bodlovic. It shows performer Sarah McCardie standing on stage and seemingly speaking urgently to the audience with her hands wide. She wears a loose black top and has red lipstick smeared across her face. Behind her is part of the set made up of two red squares and two black squares in a chessboard layout. The black squares are chalkboards.

Image 3 is from My Mum’s A Twat and shows Anoushka Warden kneeling on the floor next to a dog. They are both looking at each other. Warden wears blue jeans and a white t-shirt with the words “my mum’s a twat” on it in red. The background to the photograph is pink.

Image 4 is from Chameleon and is by Ramsay Taplin. It shows Brit Plummer standing on a dark stage. She is facing towards the left of the image and looks thoughtful. She’s wearing a bright red crash helmet, a white blouse and dark skirt. Only the top half of her is really lit.

Image 5 is from The Struggling Life of an Artist and is a composite image made up of the two performers photographed in black and white on a purple, blue and white watercolour-esque background. Both performers are wrapped around with yellow and black warning tape. One performer has a label saying “Danger Toxic” over her mouth and the yellow skull and crossbones warning image on her chest. The other has a label over her mouth saying “Danger High voltage” and the arrow electricity warning symbol on her front.

Image 6 is from Working On My Night Moves. There is a lot going on in this photograph. In the centre of the image, one performer is moving a metal A-frame ladder; she looks to be using effort and the ladder is at a 45 degree angle. Behind her the other performer seems to be moving a heap of chairs, also with effort. They both wear black vests, denim shorts and trainers. Around them in the black box studio can be seen various things: a box of used foil, a bunch of balloons, another ladder and two blue gingham dresses hung up on the wall.