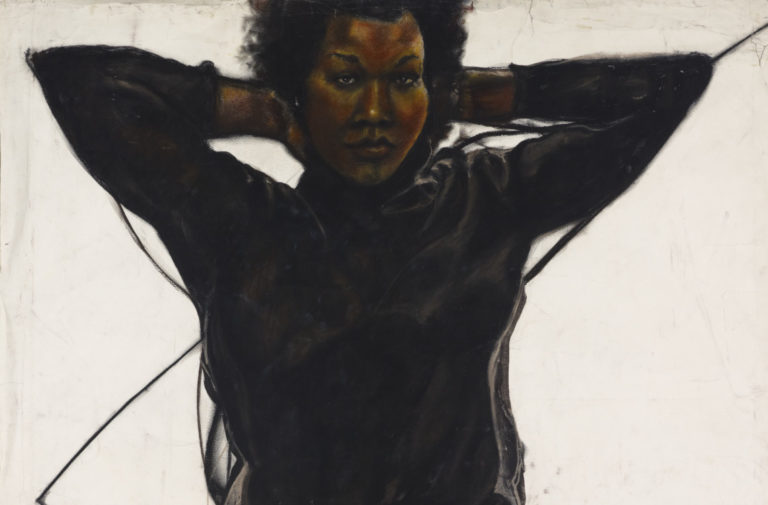 I Came to Dance at Modern Art Oxford is Claudette Johnson’s first solo show at a major institution in decades. This rare retrospective marks a unique opportunity to explore intimate and powerful pieces from throughout her career, with works on display from the early 1980s to the present day. Johnson constantly questions and demolishes the boundaries placed on black women through her large, beautiful and meticulous studies.

Claudette Johnson was born in Manchester in 1959. As part of the first substantial generation born in the UK to Caribbean parents, her combined national identity and the racial prejudice she received was a key aspect of her formative years. Moving to Wolverhampton to study art, Johnson was struck profoundly by the lack of black individuals as both creators and subjects in the art history she studied.

It was at art school in Wolverhampton that Johnson first met a number of other black artists who had also previously felt alienated and outnumbered in otherwise-white student groups. Even after finding one another at university, their immediate surroundings were still dominated by white voices, white history and white art; so they united to discuss their own approaches, to air frustrations and to encourage and support one another in their work.

This movement culminated in the creation of the BLK Arts Group, founded by Keith Piper, Marlene Smith, Eddie Chambers and Donald Rodney. They hosted the first black arts conference in 1982 to huge success, with participants from across the UK. “It completely obliterated the sense I had of being a solitary black art student with the remote ambition of becoming an artist,” Johnson says. “Until then, I hadn’t realised there had been a Caribbean arts movement or earlier generations of black artists who had shown work in national art institutions.”

When Johnson gave a seminar as part of this convention, there was uproar in the mainly-male audience when she asserted that the experience and representation of black women in art and media differed significantly from black men. The women’s workshop was brought forward to continue the conversation, and among the group were artists Lubaina Himid, Ingrid Pollard and Marlene Smith. They would become Johnson’s lifelong friends and constant supporters of her work, with many of the pieces on display in the exhibition coming from their private collections.

A key factor in approaching Johnson’s work is the understanding that her pieces are not portraits. They are modelled after real-life people, a mix of sitters and photographs, and often show family and friends. But Johnson seeks to explore what the subjects say about the human condition in general, about identity and experience as a whole, rather than the more individual scope of a portrait.

In Johnson’s work the figures are central, in command of both the space and how they are seen within it

Pose is a crucial element of her pieces. Johnson invites her sitters to take up the space in the frame in a way that feels comfortable or powerful to them; she views this as a method of collaboration between her and the sitter. Sometimes frontal, sometimes not, sometimes breaking the boundary of the frame entirely, the figures’ residence of the canvas is incredibly striking. Equally important to me was the use of the subject’s eyeline, either directed unflinchingly out at the viewer or away to one side, creating a more private, intimate feel.

This combination of gaze and pose feels especially significant given how often in (British) art history black men and women were reduced to diminutive figures, often gazing up adoringly at their white counterparts from the sidelines. In Johnson’s work the figures are central, in command of both the space and how they are seen within it. Though they often embody emotions such as discomfort or frustration, they are always dignified, dominant and human.

“I wanted to look at the ‘business’ black women had in their skins – how they take space, what their ways of presenting themselves say about the place they occupy in the world. […] I like to think that the women in Trilogy are telling their own stories through the way they inhabit their allotted spaces.” – Claudette Johnson

Johnson’s work is deeply preoccupied with the use of colour and space. Moving through the galleries, her vivid use of colour is constantly striking, drawing on vibrant reds, blues, purples and greens; she was inspired in her early years by the “anti-naturalistic” use of colour by artists like Toulouse-Lautrec. Her work has always been interrogative of her predecessors, particularly of white male artists who have ‘drawn’, to put it mildly, on African art for inspiration. ‘Standing Figure with African Masks’, a recent pseudo-self-portrait by Johnson, was a direct response to Picasso’s ‘Les Demoiselles d’Avignon’; “I was struck by the rawness of the image,” Johnson says in the exhibition notes, “the fractured space, his use of African imagery and the fearlessness of the women.”

Many of her pieces feature figures surrounded by white canvas, sometimes dissipating into white canvas within their own body. This is most powerfully shown in the eponymous work of the exhibition, ‘I Came to Dance’. Amongst Johnson’s early work, created in 1982, it demonstrates both her meticulous skill as an artist and her ability to work with simple, abstract forms. The central figure is fractured, with the hollows in her body standing as symbols of the terrible losses suffered by black communities as a result of the slave trade. Culture, language, art and family were all often completely wiped from memory, shown here in these brutal open spaces.

The act of dancing is also politically charged for Johnson. She wished to explore the complex bittersweet nature of dance for black women; she sees it as both an enjoyable and freeing experience, but is also acutely aware of its role as a cruel stereotype and the implications of primitivism it has sadly accumulated. The tension between these two concepts sings through the painting in its bold and deliberate use of space and line.

“Pushing the pastels around on oversized sheets forces me to build the forms in a physical process that is almost at the limits of my capacity. Being slightly out of control of the process, through working on the wall rather than on an easel, having the sitter behind rather than in front of me, helps me to keep an element of struggle in the drawings.” – Claudette Johnson (exhibition notes)

The grand scale of Johnson’s work is a major aspect of her creative process. The first piece the viewer sees, ‘Standing Figure’, was chosen by Johnson to open the exhibition because it contains the fingerprints of its creation, with pieces of masking tape and pin-spots still showing from where it was hung in the studio. The movement of Johnson’s body in creating the works, the relationship between the artist’s physicality and her materials, is an extension of her desire to see black bodies shown in art on their own terms.

“Within art-making, unlike within other art forms where you can go back and edit, one of the skills that’s extremely hard to master is knowing at which point to stop”
Johnson’s tremendous skill in drawing has been with her since an early age, carefully encouraged by her art teachers at school. To highlight this ability, included in the exhibition is a small cabinet of ‘warm-up’ sketches that Emma Ridgway (head of programme at Modern Art Oxford) noticed on visiting Johnson’s studio.

For Johnson they are playful, a method of investigating the page and moving into the right mindset; she was amused by Ridgway’s request to display them. For the viewer, they offer a wonderful opportunity to explore and appreciate both Johnson’s emotional insight and technical skill at an earlier stage of her creative process.

Her facility to balance the occupied and unoccupied space in a piece is definitely something to be admired. As Ridgway (who was kind enough to take me around the exhibition) told me, “within art-making, unlike within other art forms where you can go back and edit, one of the skills that’s extremely hard to master is knowing at which point to stop, when aesthetically the work has achieved the communication of what you’re interested in.”

This capacity to move easily between lightness of touch and density of detail as needed is rare.

“I work with the tension of a society committed to distorting, controlling and mis-defining Blackwomen. Yet I continue to find expression in images of black pastel women, chaotic and austere, pushing against the boundaries of white paper.” – Claudette Johnson (exhibition notes)


Johnson’s work has always been interested in exposing and exploring the boundaries society places on black women, particularly those originating in colonialism. The majority of her pieces are of women, and though most of them are clothed, some are not. Johnson does not refer to these as nudes, as she has an aversion to the connotation in art history the term evokes, particularly in the idea of women as passive objects to be viewed. “I feel that the active involvement of the women in my drawings, who are so obviously engaged in creating themselves,” Johnson says in the exhibition notes, “acts to challenge the entrenched passivity and negative sexuality of the “nude” tradition in painting. […] Working with images of women who are naked is a way of getting back to basic questions of identity and sexuality.”

A few of Johnson’s pieces are of men. Particularly powerful is ‘Seven Bullets’, created in 2015 from a photograph Johnson saw of an African American man who’d experienced horrific violence, surviving seven gunshot wounds. As Ridgway explained to me, “the endurance of the black experience is something that Claudette talks about – that difficulty of experience, and yet the lack of sympathy, compassion and care there can be within society really moved her, and she felt it was very timely to do some depictions of young black men in response to that.”

The softness, warmth and humanity of these pieces is particularly moving in the light of this intent.

Since Johnson’s career began in the 1980s, images of black women in the media have increased in both number and complexity. “Thirty years ago,” Johnson explains, “There was no equal marriage, there were no black female members of parliament, I had never seen a black teacher or doctor, so there have been positive changes on that front. Conversely, social media has the power to reinforce a status quo in which black people are never quite clever enough, pretty enough, powerful enough to make the grade. And that is very damaging.”

With that in mind, it seems especially pertinent that I Came to Dance provides a rare opportunity to see the black female experience through the extraordinary and powerful work of a black female artist.

I Came to Dance finishes at Modern Art Oxford on 8 September. Visit their website for more information.

All images used with kind permission of Modern Art Oxford (save for detail on Standing Figure, author’s photograph), taken by Ben Westoby. Feature image shows a painting of a woman wearing a dark top against a white background, her elbows raised and her hands clasped behind her head (part of ‘Trilogy’). First inset shows a painting of a woman wearing a bright red top, her stomach exposed, and blue trousers. She leans in a diagonal across the space, against a bright blue background. The background features a number of masks.

Second inset shows a monochrome painting of a woman, half-abstract, half-detailed. Her body is twisted through the frame, both facing the viewer and pointing to the right. In the background are a series of geometric shapes. Third inset is a detail from a larger drawing, showing a woman’s hand pressed against her side. Sellotape is stuck over a tear. Fourth inset is a painting of a man wearing a blue and red check shirt, his hands clasped behind his neck.