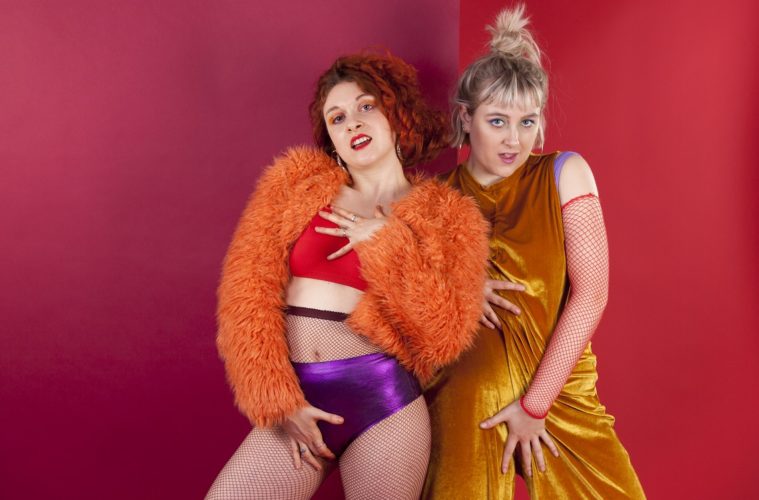 Hotter: heating up the parts other productions can only dream of

Hotter is a show about the relationships women have with their bodies and with each other. If that sounds painfully earnest, don’t be alarmed – this remarkable performance contains multitudes and is poignant, uproarious and affirming in equal measure.

The piece is devised and performed by Ell Potter and Mary Higgins who met while students at Oxford University; the pair started out as friends, before becoming lovers. Eventually, they separated, but continued to work together on Hotter ahead of their Edinburgh Festival Fringe debut because they’d “already paid for the venue”. It’s a tribute to them and a relief for the theatre-going public that they did because, well – they might be the future of theatre.

As we take our seats at Soho Theatre, we see the young women dancing with abandon in furry coats to a party playlist of tunes by pop princesses such as Lizzo and Britney. It’s a somewhat misleading introduction to a performance of such gravity but, hell – the two shouldn’t be mutually exclusive.

The music comes to a halt and the pair adopt comedic poses and lip-sync along to the real-life words of a range of women and non-binary people, aged 11 to 97, talking about what makes them hot – in every sense of the word. From posh-sounding seniors, to awkward teenagers, their responses and Potter and Higgin’s physical interpretations of each character are laugh-out-loud funny and the sold-out show is roaring with laughter. It’s a great start.

In a culture that often conflates women’s power and success with sexual fulfilment, it’s refreshing to hear a narrative that deviates from this

This progresses into listening to recordings of people talking about their bodily insecurities and curiosities, followed by a quick-fire round of questions between Higgins and Potter, which shifts the mood significantly when questions such as “why did you leave me?” and “when was the last time you felt bad about your body?” arise. The tension in the room is palpable – it seems like the entire audience is holding its breath.

At this stage, the pair dispense with other people’s testimonies and tell us their own. Higgins speaks of the self-loathing she feels towards her body and of how her grandmother’s friend told her that her body was “perfect” – and of how no-one had told her that before. She confesses to thinking about her weight “constantly” and how bored she is of doing so. She tells us how scared she felt about being gay. After the earlier descriptions of orgasms, it’s a surprise when Potter tells us that the first time she masturbated it “didn’t work” and of how awful this made her feel. In a culture that often conflates women’s power and success with sexual fulfilment, it’s refreshing to hear a narrative that deviates from this. Sexual desire and fulfilment can mean very different things to different people and can change and shift; not everyone is having earth-shattering orgasms all of the of the time – and that’s OK. Not everyone wants them.

This is personal, powerful material – and it feels real. Shame – around bodies, being gay and sexuality – is the presiding theme and for an audience predominantly composed of women, it’s familiar territory. It’s emotional, but it’s honest and raw. In a world of social media performativity, this kind of authenticity feels radical.

Listening to these women speak truthfully about their wants, desires, worries and pressure is a reminder of the ways in which honest conversation about the reality of women’s lives is still patently lacking in our lives. Progress is happening when it comes to talking about the pressure, challenges and violence many women face during their lives, but it’s not happening quickly enough. Listening to Higgins and Potter cut through the bravado and pretence that many of us often use to cope with a patriarchal and hostile world, is profound. It feels healing and is a welcome reminder of how much we have in common.

Rather than leaving us despairing, the performance lifts in an affirming and heartfelt way. At the end, the tunes return and Potter and Higgins encourage us to join them on stage for a dance, resulting in a full-on stage invasion. People are on their feet, clapping and moving and, for a moment, it feels kind of magical. To describe the show as an emotional journey would not be an understatement.

“Everything at Edinburgh Fringe was shit compared to this”, says one audience member on her way out – and she’s not alone in her love for this brilliant performance. Smart, insightful, powerful, shattering, sustaining – watching Hotter is like spending an hour with the best friend and the best therapist you could wish for. That the pair are only in their early 20s is astonishing.

Higgins and Potter close the show with the announcement that they will return to Soho Theatre in December with a new show called Fitter which focuses on masculinity and what makes men – trans men, cis men and masculine presenting folks – “hard”. If it’s anywhere close to the dizzy heights of this unflinching production, audiences are in for an absolute treat.

Both images show Higgins and Potter in front of a dark print background wearing bright clothing. One wears a mustard-coloured all in one and the other wears metallic purple hotpants, a dark pink crop top and an orangey-pink furry jacket. They both look straight at the camera.

In the feature image they have both of their hands on their own bodies, with one hand on their crotches. In the image in the text they face towards each other with one hand each in the air. In this picture we can see they are both wearing Dr. Martens boots.