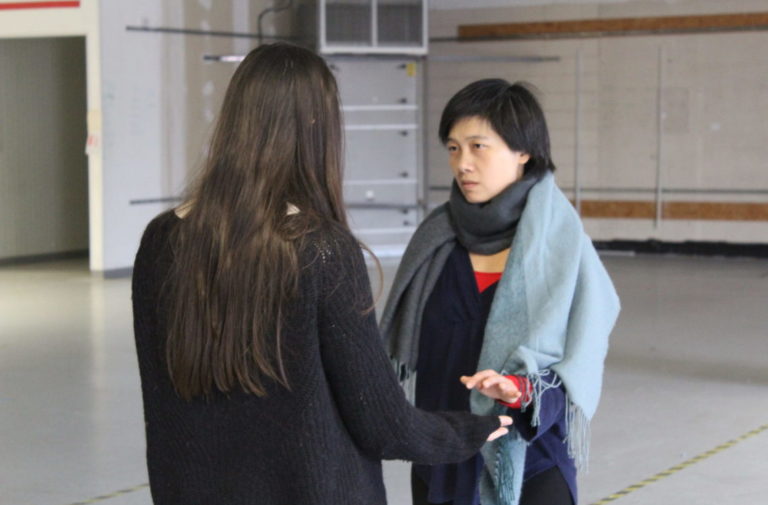 “I’m writing it for a younger version of myself”

I finish reading i will still be whole (when you rip me in half) and realise I am due to call its author, Ava Wong Davies, in only a few minutes. The play took me more time to read than expected. It creates a dense, rich tapestry of images that take longer to mentally unpack than an ordinary drama. I feel like I’ve been smacked in the face by it – in a good way. i will still be whole feels like its title suggests; it simmers and seems like a delicate thing – soft, lyrical – until it wrenches you apart.

There are two strands to the script. First, a mother, Joy, East Asian, a first-generation immigrant. Second, her daughter, EJ, a young adult, who has started dating a white woman and is attempting to figure herself out and discover her identity. A prelude shows Joy abandon baby EJ. EJ grows up with her white father.

On the phone, Ava is friendly and self-effacing. I tell her I don’t know how to describe the script, except it feels so fragile, so disconnected, that it might just shatter. She tells me that over the course of several drafts she switched from a traditional structure to a complete fluidity of construction. It took her a while to find the correct form. i will still be whole developed from incarnations at The Yard and Vaults Festival 2019, and arrives at The Bunker in London while she’s still an undergrad at university. She describes her discomfort with the ‘well-made play’, which she perceives to be cultivated by the “white cis straight man”. She says it is no surprise that that many women, especially women of colour, are rejecting it in favour of more loosely structured work.

I tell Ava the play reminds me of Alice Birch’s Anatomy of a Suicide, particularly in relation to the themes of motherhood and trauma. Ava replies by saying she recently met Birch. (In fact, their recent conversation was posted online). They discussed, amongst other things, the nature of criticism. That’s the other thing about Ava: she’s a critic.

She tells me early drafts of the play were like therapy, her connecting to her identity. She said it was something she needed to work out on her own, and that it wasn’t fair to put that onstage to an audience. She says that plays about identity make her cringe

Her reviews for Exeunt magazine often seem to gain a lot of online traction. She bristles at what she views as lazy, offensive and boring work. She says she cringes over her 2018 review for Exeunt of The Great Wave, a play about North Korea at the National Theatre’s Dorfman, in which she discussed her inability to “not burst into tears every time I see someone onstage who looks vaguely East Asian”. She later modified this response in her blog, where she writes that she feels “almost duped by it, by the National, for…what, tricking me into being grateful and satiated?”

Has being a critic influenced i will still be whole in any way? The play is unusual for a British work insofar as it centres on two East Asian characters. Was she consciously trying to fill a gap?

She tells me early drafts of the play were like therapy, her connecting to her identity. She said it was something she needed to work out on her own, and that it wasn’t fair to put that onstage to an audience. She says that plays about identity make her cringe. i will still be whole has changed since its early drafts and is less directly autobiographical now. It is still concerned with body, race and what it means to be seen as other. The body as a site of inherited trauma is a running thread. Ava says of her play that:

A lot of it is about the way we process things, process trauma. A lot of it is about the body and the way we sort of hold pain, and hold loss in our bodies, and the way [people] feel their bodies are betraying them. Sort of, towards the end, when they meet for the first time, where she [EJ] says to Joy: ‘I want you because it feels so baffling because it feels like I want you because it feels like there’s something inside me which is trying to get out but I don’t know you.’ So yeah, the way your body can sort of not feel like its own.

I ask how much she relates to the play now. She laughs that she has never been pregnant, for example. We talk about the violence of motherhood and how it’s often portrayed as a rosy, natural state. Ava comments on how she “had always viewed motherhood as such a scary, violent thing, in all senses, like psychologically, like completely mad … It must be traumatic in some way and to classify it as a beautiful, natural thing – which in many ways it is – is disingenuous”. Perhaps the most surprising thing about Ava is her self-deprecating nature. She speaks fluently and articulately about her influences and yet I sense her discomfort at having to talk about herself. She talks about her wrestling with the content, her recent exhaustion in the rehearsal room. She jokes that she’s nervous with the actors. She will be the first to suggest a line cut. She panics when actors don’t immediately connect to her writing. I offer that I cannot imagine a white male playwright having the same kind of self-doubts.

She tells me she doesn’t want to think about how critics might receive the play, and in the same breath confesses that she has, in fact, thought about it, and that everything she has thought about it is negative. I agree that when you know of everything that might be wrong with a play (as a critic), writing, as an act of creativity and the imagination (as a playwright), must be difficult. She points out that this is a false dichotomy. Although the roles of critic and playwright “come from different parts of the brain”, they are increasingly blending into one through blogging and Twitter.

We talk about social media and how easy it is for things to be spun out of proportion. She recently tweeted a link to her Exeunt review of Rupert Goold’s The Hunt in which she examined the Almeida Theatre’s choice to programme the work. She simply pointed out that it was odd to put on a narrative about male innocence (and false female accusations) in the time of #MeToo. It sat uncomfortably with her, as it did for many female audience members.

Ava is big on what some (sickeningly) refer to as ‘Theatre Twitter.’ She has almost 4,000 followers, which is more than most established theatre directors and playwrights. Perhaps this is why some interpreted the review as a takedown of the venue, or of the British theatre industry entirely, which was not what she intended.

That said, i will still be whole offers a different kind of theatre to the type she usually reviews: one which presents female characters I can actually relate to. I end by asking her who she hopes will go and see her play. She replies: “people who don’t normally go to theatre, a young mixed-race audience. Young queer people. I’m writing it for a younger version of myself.”

i will still be whole (when you rip me in half) plays at The Bunker in London from 12 until 23 November at 7pm. Before I Was A Bear, a new play about friendship, sexuality and hot TV detectives, plays at the same venue on the same dates at 8.30pm. The Bunker has just announced it will unfortunately be closing in March 2020.

The feature image shows Aoife Hinds and Tuyen Do in rehearsal and is by Ben Kulvichit. They face each other at an angle to the camera so we can only see the back of Hinds’ head. They look seriously at each other and are just about to hold hands. They are in a big wide open space that looks like it might be a disused office or basement.

The image in the text is a black and white photograph of Ava Wong Davies. She is sitting sideways on a chair, with a phone in the hand of the arm leaning on the chair back. She rubs her eye with her other hand and is smiling. She looks slightly away from the camera.