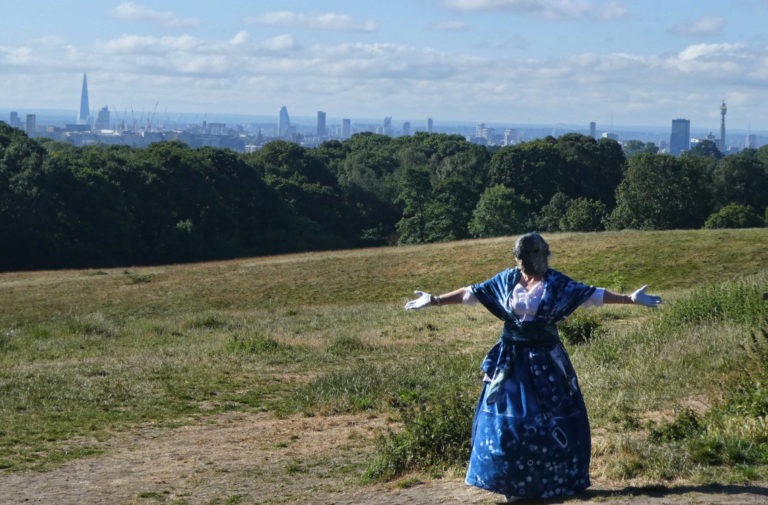 Bringing the mother of the Gorgons onto the streets of Europe

Clare O Hagan’s latest exhibition Keto, Goddess of the Sea was due to open in Parikia on the island of Paros in Greece this June. When, due to the outbreak of Covid-19, it was cancelled alongside many other cultural events on the island, O Hagan was unfazed. She instead found a way to share her work with the world at a time where art is less accessible than ever before.

Irish-born O Hagan is a visual artist and filmmaker based in London. I happened upon some of her work on social media a few years ago, and was instantly captivated by its complexity and the wide range of techniques she employs. She creates conceptual projects conveying complex and often deeply political topics. Her major solo exhibition, Embracing Women, was staged in the USA and the UK in 2019. It featured themes of female eroticism and same-sex intimacy, exploring notions of sexuality and desire without self-censorship. Her recent accolades include two Angel awards at Monaco International Film Festival, won jointly with friend Denise Wyllie.

The works due to be shown as part of Keto, Goddess of the Sea were inspired by the increase in plastic pollution in the world’s oceans, something O Hagan observed along the shoreline in Paros during her regular visits to the island over the last decade. “I find that Paros offers a space unlike any other,” O Hagan explains to me. “There’s something really special about it. I recognised it the moment I first arrived. It’s got this deep, visible connection with the footprint of humankind from ancient times, which seem to echo to this day. The small island in the heart of the Aegean Sea has been inhabited since 5000BC! And this history is everywhere, at your feet, lodged in doorways and niches in walls. It’s been inspiring my work for years!”

Not unlike a feminist retelling of Odysseus wandering the seas, trying to return home, O Hagan decided to send Keto on a voyage of her own

Profoundly saddened by the plastic pollution, O Hagan decided to resurrect the lost female narrative of Keto, goddess of the dangers of the sea. “Mostly when people think about Greek sea gods, they think about Poseidon, or perhaps his wife Amphitrite,” she tells me. “Keto doesn’t ever seem to be as prominent in mythology. She’s the mother of the Gorgons, and they were known to be incredibly powerful. In my opinion, along with many other strong powerful women, they were given a lot of bad press by only ever being portrayed as monsters. The Keto I’ve reimagined is very different. She’s full of courage, endurance and vigour! She’s certainly no villain. Far from it.”

O Hagan has created a series of prints and assemblages to illustrate Keto and her mythological past. Comprised of over 50 artefacts in total, including debris collected from the shoreline of Paros, the work is a feminist call to arms. In her work, O Hagan summons Keto and her fellow Greek Goddesses to unite and protect our seas from drowning in plastic pollution. Alongside the exhibition, O Hagan had also set up workshops with Clean Blue Paros, an organisation dedicated to supporting Paros to become the first plastic-waste free Mediterranean Island. She says:

With the public’s exposure to art so heavily restricted right now, and although we had to call off the exhibition, I really wanted to bring Keto’s narrative to London for everyone to see. After all, it’s an important message that definitely still needs to be heard!

Not unlike a feminist retelling of Odysseus wandering the seas, trying to return home, O Hagan decided to send Keto on a voyage of her own. “I want to share the work with my fellow Londoners because they can’t visit our wonderful galleries right now. But I couldn’t lose sight of why I created each piece in the first place as a response to plastic pollution on the shoreline of Paros,” O Hagan says. “Keto has important work to do there. So I’m going to become her, metaphorically, in costume. I’ll journey down the Fleet river which runs underneath London, from Hampstead Heath, where I walk regularly, to the Thames via Fleet Street.”

But her journey won’t stop in London. O Hagan explains to me that with the help of friends and fellow artists, “Keto will hopefully be making appearances in other countries including Paris, Budapest and Athens later in the year, on her way home to Paros. I was mindful to create a costume that could be worn by others for this reason. The first person to become Keto outside of the UK will be my dear friend Christine Patrie. She lives in Paris, and is the person who introduced me to the Island of Paros many years ago.” On this journey, O Hagan will be wearing a costume made entirely from her own original work. The pieces are inspired by Keto and created using a cyanotype printing process (the original method used to reproduce technical drawings as blueprints). She has painstakingly transferred her images onto the fabric of her garment, using a solution that develops in the sun, in order to transform herself into the Greek goddess.

“I originally began experimenting with the process in Paros, but have been able to continue it in the UK, thanks to all the good weather lately!” she tells me with a laugh. I am lucky enough to see the costume ahead of Keto’s journey, and some early experiments before O Hagan starts assembling it. It looks incredible. The cyanotype process has given the piece an amazingly surreal, mythical quality, as if Keto really has been lying dormant under the sea for thousands of years and has only just surfaced.

O Hagan is inviting everyone who lives near Keto’s route, and indeed further afield, to look out for this unique combination of performance, environmental and mythological art

“It’s actually going to be really interesting to see how Covid-19 has affected the issue of plastic pollution in general,” muses O Hagan. “With the big dip in tourism Paros will experience this year, I’m sure Keto is likely to have less work to do when she arrives. Although to me, any plastic pollution is still too much. It’s totally avoidable, after all.”

Keto’s adventure homewards will begin at Hampstead Heath on the 19 June, the day the exhibition was originally due to open in Paros. It’s likely to be the one of the first opportunities that many Londoners have had to enjoy art outside of our homes in quite some time. O Hagan is inviting everyone who lives near Keto’s route, and indeed further afield, to look out for this unique combination of performance, environmental and mythological art as she journeys the streets of London. She’s keen to still broadcast her message, even if it’s a little closer to home than originally planned.

Cover image used with kind permission of the artist. It shows the artist in a blue dress wearing white gloves and standing in a field, her arms spread. The London skyline is visible in the background. First insert via Twitter. It shows one of O Hagan’s assemblages, a reconstruction of Keto made out of plastic materials gathered from the beach. Second inset via O Hagan’s website. It is a black and white print of an etching done by O Hagan, showing of a pale face inside black borders. The face is made of the stone shown in the first insert.