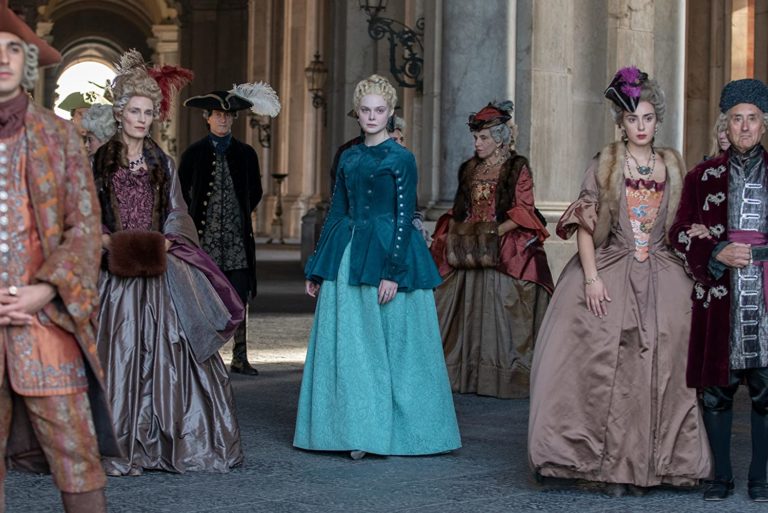 The Great paints an eerie picture of modern Britain

The best thing about Hulu’s mini series The Great is that it sucks you in. You’re watching puppies fly from balconies and bricks fall on people’s heads and you think: “This is so much fun.” It only took me a day to make my way through all nine episodes.

The story is about Catherine the Great’s (Elle Fanning) first six months in Russia, in which she was married to Peter III (Nicholas Hoult) and subsequently overthrew him to lead Russia in her own right. Elle Fanning plays Catherine as an ever optimistic 19 year old, who is convinced that leading Russia is her destiny, despite being a German and a woman. Peter III is truly an awful character, a person who delights in creating as much fear and humiliation as possible, while remaining convinced that the country loves him. We spend most of the first episode learning to hate him. Viscerally.

The showrunner Tony McNamara also co-wrote the screenplay for Yorgos Lanthimos’ The Favourite and that tone can be felt throughout The Great, only more so. We see the full horror of that court: the bear baiting, the electrocution of children “for science” and Peter’s fickleness. We see that the whims of Peter cost lives and relationships. Throughout the show, Peter is openly sleeping with his best friend’s wife Georgina (Charity Wakefield) and the couple’s position in court relies upon Peter’s access to her. She knows this and must therefore be loyal to the crown, even at risk to her marriage and her body. His fickleness also extends to outside the palace. While the Enlightenment is in full swing throughout Europe, Peter has banned beards for men under 50, purely because he doesn’t like them. His Russia is portrayed as thoroughly in the Dark Ages as the world is changing around them.


The Great comes at a particular moment in time, when a lot of us believe that there is one rule for the upper classes and another for everyone else
Equally, as the show continues, Catherine learns to master the court, using the noblemen’s superficial opinion of her in order to get what she wants. In one episode, she single-handedly negotiates a whole peace treaty with Sweden under the guise of saying that Peter “mumbled it while he was asleep”. Peter then takes all the credit, but we know that she made it up on the spot.

Around the middle of the series, I started to worry that the show would go full tilt on the idea that being the power behind the throne is more powerful than the actual throne, painting a picture of the puppet master who is in control behind the scenes. Recent pop culture has tried to subvert this trope through Cersei in Game of Thrones or Claire Underwood in House of Cards, but even real life examples, such as the media portraying Ivanka Trump as the “secret progressive force” behind the US President, indicate that our culture is far more comfortable with (overtly white) women’s secret achievements rather than their overt power. Catherine manipulates Peter into getting more art and science into the palace, but I started to worry that we would never get to the fun stuff of her trying to kill him. Episode 5 particularly worried me because of Peter’s death-scare. He is poisoned and plans are made so that Catherine can assume the throne. However when she addresses key members of court, she panics. She does a terrible job but that’s great storytelling. I know that in real life the coup was successful and she did assume the throne, but the show scares us into thinking that maybe the world that she wants isn’t possible. Maybe her eternal optimism means that she doesn’t have much experience in leading a country.

And then it hit me.

I started to see all the ways in which the show mirrored the UK’s political climate right now. Thousands of people are dying and many of our leaders are unwilling or ill-equipped to deal with the crisis. The justified public anger against Dominic Cummings breaking lockdown comes because all of us have sacrificed so much. Boris Johnson’s near-death experience made many of us hope that he would become more humane, more sympathetic to the average person on the street. I’m sure that’s what Catherine hoped for after Peter’s poisoning. But then, in one of his many car-crash interviews, Boris came to Cummings’ defense. Heartless Tories are still heartless. Normalcy has been restored.

The Great comes at a particular moment in time, when a lot of us believe that there is one rule for the upper classes and another for everyone else. Staying in the good graces of the Prime Minister can mean a job for life, but stepping out of line can mean losing your job, your livelihood and being shunned by your coworkers. Much like The Great. A lot of time is spent in the show trying to convince people that Catherine would be a better ruler than Peter and there are many reasons why people object. She’s a woman. She’s too progressive. She doesn’t understand Russia. But then some of the reasons make more sense, like the possible consequences for all if the coup was to fail, or whether Catherine actually has the skills to do better than Peter. At the end of the day, Catherine spends a lot of time trying to prove that she would be a good leader, rather than being given the space to be one.

I don’t know what lies on the other side of this pandemic. I know that the right-wing Daily Mail and Piers Morgan are appalled by the government’s actions, but I don’t know if that will stick. I know that people have been using Dominic Cummings as an excuse to break lockdown and I’m sure they will be called selfish. I know that global leaders like Jacinda Arden have swiftly defeated the virus, by implementing early and strict lockdown procedures, as well as a vigorous test and trace system. In comparison, the UK is still working on one and an underfunded NHS was not prepared for pressure on this scale. But I know that life goes on. People have birthdays and weddings and leases that will expire.

Similarly, The Great ends on a cliffhanger. Peter is still alive by the end and we don’t know the fate of many of the best characters. We don’t know whether the fictional Catherine is successful in bringing about the much-needed revolution. But we hope so. We hope so.

The Great is now streaming on Hulu.

Images courtesy of IMDb.
Image description:
1. Catherine The Great looks at the camera with a grim expression, surrounded by white noblemen and noblewomen of the court who look much more at ease. They also wear period clothing but of strikingly different colours from Catherine.
2. Catherine and Peter III raise their glasses in celebration, but their faces are somber. They are standing behind a banquet table in an ostentatious palace.