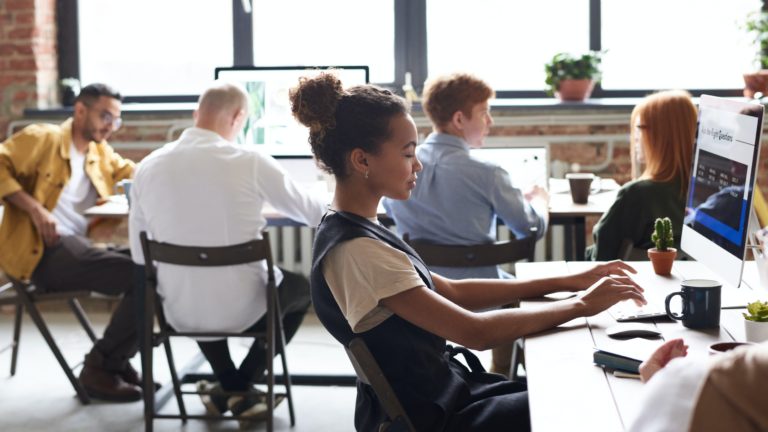 Working at a tech startup as a woman of colour

Tech companies are seen, in the popular imagination, as young and diverse hotspots for employees who want to contribute to cool innovations that will shape the future. I distinctly remember my career advisor in sixth form, when taking us through a list of professions, gushing over tech startups and proclaiming them as the workplace to be at for young people. Mark Zuckerberg was the prototype leader for tech-savvy millennials, while Steve Jobs shunned conventional corporate culture by donning casual clothes. As a teenager without any professional experience I thought: “I’d love for someone like them to be my boss: the type who is more like a friend than a boss”.

Having previously lived in Saudi Arabia, I witnessed the effects of a society which, in my opinion, epitomises sexism and patriarchy. For example, women still have very limited employment opportunities across various industries, such as in tech, finance, law and so on. Consequently, I have always sought a progressive working environment where I will be welcomed.

Following my graduation, I made a point of researching the culture of the places I was applying to for work. I was looking for a job in London, one of the most multicultural cities in the world – surely I would not be tokenised, but rather, defined by the work I put in? At a job interview at one particular tech startup, one selling point that the CEO and managers constantly highlighted to me was the open-mindedness and inclusivity of working there.

However, what I learnt upon securing employment there, was that it was as toxic and patriarchal as any other industry. As the only woman of colour in the office, I felt tokenism was attached to my name. It was blatantly obvious sitting in a room full of white men. I was labelled the militant feminist or diversity warrior when I got into disagreements, such as with one ignorant colleague who refused to acknowledge his white male privilege in the context of employment opportunities and, on another occasion, when he stated that colonialism was a positive point in history as, according to him, countries that were formerly colonies would have been ‘third-world countries’ otherwise, which itself is a problematic term.

The constant othering eventually started to get to me. I had recently graduated from one of the best universities in the world and had previously been confident in my abilities and quickness to learn. In spite of my achievements, as I sat in an office with men who spoke to me in a patronising way, I found myself plagued with self-doubt and downplaying my skills while the men in the office comfortably boasted of theirs.

Then came the issue of alcohol. All year round the fridge was filled with beers, so much so that someone once remarked it looked like a first-year fresher’s fridge. Alcohol was elevated to the status of currency in the workplace, with rewards being packaged in the form of alcoholic beverages. But it’s easier to replace one employee who is trying to challenge the status quo than to change the culture.

At Christmas there was even more alcohol in the office. The Christmas party was at a swanky bar and we all got very drunk, with an £800 bill for six people at the end of the night. I had to take care of my boss when he became too drunk to look after himself and was being disruptive; all the men having decided to leave. As soon as they left, my boss, the CEO and a family man, made an uninvited advance at me (a kiss), which I didn’t feel I could turn down. I was devastated and blamed myself, especially as he has a wife and young child. I thought: “Oh my God. He doesn’t seem like a cheater. I’m a homewrecker. How can I look him in the eye?” and “I’m going to get fired. I responded to him way too enthusiastically. I’m going to be held responsible”. I wondered what I could have done differently in that situation. My ill mental health at the time undoubtedly made the situation worse.

Ultimately, I had to leave, as there was no way I could stay at the company after all that had happened. A professional boundary had been crossed. My work was also being discounted and I was being infantilised just because I was the youngest in the office. In addition, my efforts to introduce a corporate social responsibility programme weren’t being taken seriously. I was only going to be 23 once, and I didn’t want to spend any more of it there.

After I left, I realised just how much my contributions to the company had been downplayed. I had done the bulk of the work on a client project that resulted in the company earning a £20k revenue: the only revenue that had been generated that year at a company still dependent on investor cash. But my colleague, the aforementioned imperialist, took the project over after I left and took all the credit.

My manager at the company had promised that if they scored the client after I left, he would give me the courtesy of informing me. Three weeks after the deal was done the client reached out to me on LinkedIn and thanked me for my work himself. I then sent a brutally honest email to my former manager. I spoke of the distress I felt sitting at my desk, the toxic, alcoholic culture and of the injustice of them discounting my work and then benefiting from it. The same company who claimed they had a diverse and inclusive business, had given the credit of my work, a woman of colour, to a white man. They had used diversity rhetoric in order to appear progressive, but in reality their culture was far from inclusive.

There is a stereotype that tech companies are inherently progressive by virtue of their innovations. But their work needs to be separated from the workplace itself

Talking with other women, I have learnt that the tech sector, especially in London, is dominated by white men. I recently went to a women in fintech event and found myself bonding with a young woman who had also had to leave a job after being sexually harassed. In a post-#MeToo world, where millions of women across the globe have spoken out against sexual harassment in the workplace, there is no excuse for this behaviour to continue. We had both thought that this sort of toxic, macho culture only existed in the hills of southern San Francisco, but it seems London is gradually becoming a carbon copy.

There is a stereotype that tech companies are inherently progressive by virtue of their technological innovations. But the work produced needs to be separated from the work processes and the workplace itself. We know about discrimination in large companies, both in and out of the tech sector, for instance the reports of routine harassment of women at Google. But it is the biggest companies that need to be the example for smaller companies to follow in creating positive workplace cultures. In addition, women in STEM are just not encouraged or incentivised enough to create their own startups, which might be attributed to them being less likely to be promoted to senior positions as employees and, due to pervasive sexism, have more difficulty getting jobs in the sector.The sad truth remains that the tech sector is dominated by men; only 19% of people in tech are women.

Tech startups are always enthusiastic to hire people of colour. They want their brand to be associated with diversity, because diversity equals progress and progress is cool. However, hiring people with protected characteristics (types of discrimination for which individuals are protected by law) is only the starting point. Progressivism in the workplace is proved in the small daily acts of the office, in the conversations that take place and, ultimately, in workplace culture. Simply hiring someone with a protected characteristic is just tokenism. Management need to change workplace cultures; it is not the responsibility of diverse employees to force management to change the culture. There is an intrinsic moral value to supporting and appreciating all employees, regardless of background and a study has shown that diversity increases productivity. My experience shows that actions are falling behind words in tech startups. Women of colour in tech need to be embraced, not out of obligation, but because we’re invaluable.

Photo by fauxels, used with permission, courtesy of Pexels.

This shows a woman of colour sitting at a desk and typing on a computer. The photo is taken from her right, so we see her in profile. She is wearing navy overalls and a white t-shirt underneath. Her hair is curly and tied in a bun. She is wearing silver earrings. Behind her, four people are sitting at a large table; they are slightly out of focus.