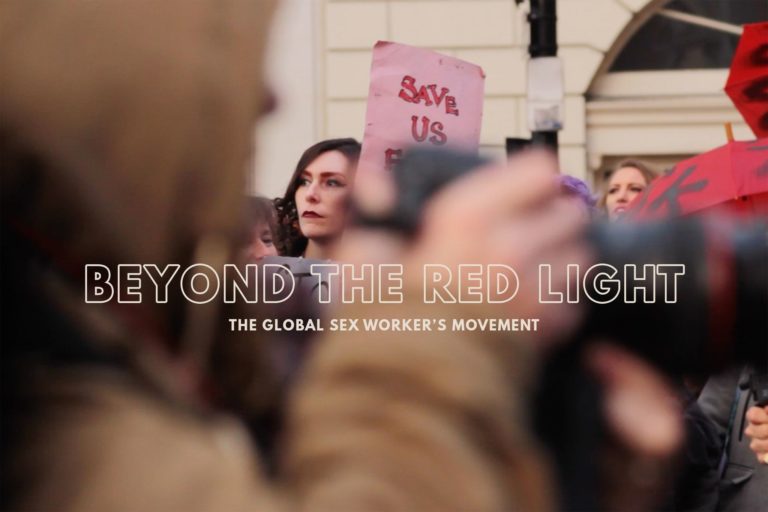 Beyond the red light

The world of sex workers’ activism had always been hidden to me.

It was only by chance that I met Stacey Clare, aka the Ethical Stripper, one evening at an activism workshop back in 2018. A dozen students sat in a semi-circle as Clare unraveled the complexity of the legal system and presented the dangers for strippers in the UK. At that point, I knew I had to invite her to the podcast I was creating. She was my first window into a global movement within the sex workers’ community.

Clare started stripping while studying at Glasgow University in 2006 and since then she has been an activist for the decriminalisation of sex work. She founded the East London Strippers’ Collective (ELSC), has given TED talks and regularly debates publicly about the rights which need to be put in place for sex workers.

The sex workers’ rights movement and the fight for decriminalisation has been around for decades. I started the documentary journey of Beyond the Red Light as part of an all women film crew. It is five of us on the team and we all come from different backgrounds and disciplines. Sabrina Jones is my co-director, Milla Lewis is our cinematographer, Thea Sun, our producer and Mim Lucy is our researcher.

As a crew we’ve had to overcome and confront many of our own prejudices. We’ve dug up resources that are sex worker-led and let the sex workers drive the narrative

“How we’re seen, how we are perceived, how we’re victimised, stereotyped, made into plot devices, is objectification at its finest,” Clare told us in one of our interviews while explaining that sex workers wish to destigmatise the industry in popular culture, society and political discourse.

I was initially reluctant to share sex workers’ stories due to the media’s recurrent practice of skewing the truth to fit larger narratives of victimisation or vilification, but prioritising the truth has provided me with more access and trust from the sex worker community than I could have ever imagined.

Sharing the same goal as Clare, Ashleigh Williams and Georgina Tyson, both art students and sex workers, founded Babeworld3000 in order to build a community of sex workers. “We see no or barely any representation which is beyond fetishisation or pure eroticism that represents sex workers in the art world,” Williams told me. “We wanted to show the mundanities of what sex work is”.

Many creative subcultures have erupted in the sex work scene using arts to portray their experiences at work. We spoke to Marianne Chargois who puts on SNAP Festival once a year in Paris and Brussels. The UK also has sex worker-led opera and comedy nights. These multimedia formats have allowed sex worker arts organisations to tell their own story.

In January 2020, Louis Theroux’s documentary Selling Sex was released, with Williams and Tyson as participants. Rather than focusing on Williams’ multi-faceted relationship with sex work, the documentary directly linked sex work to childhood trauma, a path often taken by outside observers. As a result of this portrayal, Williams and Tyson wrote an open letter against the documentary, explaining their frustration with how they had been portrayed, as well as feeling exploited by the BBC producers who put together the show, for example through demands for free labour in sourcing clients for interviews.

As a crew we’ve had to overcome and confront many of our own prejudices. We’ve dug up resources that are sex worker-led and let the sex workers drive the narrative. After eight months of work, we still feel that we’re only beginning to understand their experiences. The UK has several sex worker organisations including Sex Worker Advocacy Resistance Movement (SWARM) and English Collective of Prostitutes (ECP). Both were very vocal during the pandemic about how sex workers were not able to work and access their usual income. Covid-19 has only highlighted the difficulties sex workers face in comparison with other workers in different industries.

But while this community has been unsupported by the government, they have sought creative and innovative means to revive their work spaces. Platforms such as Cybertease, run by unionised strippers, have formed virtual strip clubs. April Fiasco, the co-organiser of Cybertease, said that what they’ve “done is really innovative and what people wanted”.

Stacey Clare from the East London Strippers Collective moved their drawing classes online, so strippers were able to model and the Zoom audience could draw them.

While it is legal to be self-employed as a sex worker in the UK, there are many reasons why registering is difficult.

“As a self-employed person, I can claim a grant. I know some other people are registered as self-employed. The problem is some sex workers are undocumented for various reasons and they cannot access that support,” April Fiasco told us over Zoom. The stigmatisation is also a huge problem. Without support, many sex workers were left without financial assistance.

According to the sex workers who took part in the documentary, full decriminalisation, where both the buying and selling is legal, is one of the safest legal solutions for sex workers […] “As a sex worker, your work is an exchange of labour… It’s transactional… And this is what happens in the world every goddamn day,” Clare reminds us

At this point in the journey of our documentary, we knew it was never going to be the same film we had planned before Covid-19. It was also clear that the pandemic had only strengthened the discrimination sex workers face on a daily basis.

It is currently legal to sell and purchase sex in the United Kingdom. However, there are a number of laws which still restrict safe sex work. For example, brothel keeping is illegal, with a “brothel” being any establishment or private housing which has more than one sex worker. There is also a looming fear from the sex worker organisations in the UK that the Nordic Model, a legal framework first introduced in Sweden, will be adopted here too. This framework means that while it is legal to sell sex, it is illegal to purchase it. This creates more dangerous situations for sex workers as it implies clients who still purchase sex works are individuals willing to break the law. The Nordic system is being installed in many countries: France adopted it in 2016, Ireland in 2017 and Israel in 2018.

For many supporters of the Nordic Model, decriminalisation of the client means more danger for sex workers and less agency. But as we’ve seen before, the depiction of sex workers as victims deprived of their agency is harmful, specifically in these scenarios.

According to the sex workers who took part in the documentary, full decriminalisation, where both the buying and selling is legal, is one of the safest legal solutions for sex workers. For example, in June 2003, New Zealand decriminalised sex work. During Covid-19, sex workers had access to emergency wage benefits. To be legally recognised as a worker by the State has tremendous benefits for the safety of sex workers. This is the reference model that sex worker organisations in the UK are fighting for.

“As a sex worker, your work is an exchange of labour… It’s transactional… And this is what happens in the world every goddamn day,” Clare reminds us.

Beyond the Red Light hopes to highlight the organisations around the world fighting for better working conditions and for human rights. We want to be a facilitator for the voices of sex workers telling the story of a world which is normally kept hidden and we hope this film can influence public policy.

Beyond The Red Light can be supported via their crowdfunding page.

Images courtesy of the filmmakers and the English Collective of Prostitutes.
Image description:
1. A crowd of people at what appears to be a march. We can see the face of a white woman standing out from the group. She’s holding a pink sign with the words “Save Us” on it. The title of the film is displayed on top of the image.
2. A black and white archive photo of a sex workers’ protest. A group of women hold a large sign for the English Collective of Prostitutes. Some are kneeling, others are standing. Others signs are visible, such as “Outlaw poverty, not prostitutes”.