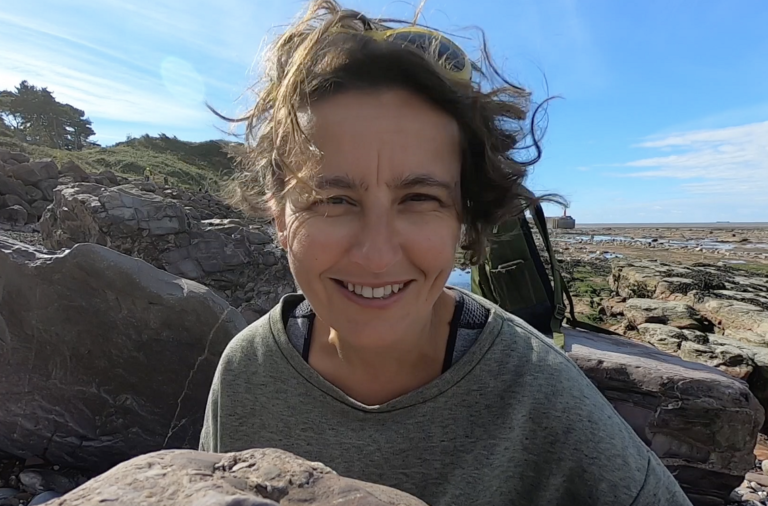 “We didn’t do anything wrong. For me it was a massive turning point to realise that”

There are 11 million adult survivors of child sexual abuse in the UK, which is a shockingly high number. They are also often unable to speak about what has happened to them because of stigma, shame and a lack of support. With the intention of giving greater voice and visibility to survivors, Viv Gordon Company is releasing a new digital artwork, She walks…, today. Struck by these stark statistics, and noting my own ignorance around this subject, I was keen to ask Viv Gordon herself a few questions over email ahead of its release.

When did you set up Viv Gordon Company? Were you already working in the arts before that?
I set up Viv Gordon Company earlier this year. Before that I was working as an individual artist making work about my lived experience of surviving childhood sexual abuse, since 2014. To start with it was an experiment – can I do this? How can I look after myself while I do it? And how will the work be received?

When I made my first show I had frustrating conversations with some venues saying that audiences wouldn’t want to see shows about abuse survival, but that’s turned out to be wrong. The cultural conversation is rapidly developing with Operation Yewtree, The Truth Project, #MeToo and a recent spate of survivor celebrities speaking out, all contributing to slowly opening people up to the very challenging reality: that abuse is widespread and that survivors face marginalisation across all sectors, including the arts.

Setting up the company reflects my commitment to creative campaigning long term for greater voice, visibility and community for survivors so that we can effect social change.

I was really struck by the number of survivors of child sexual abuse; I had no idea there were that many. Why do you think there is so little discussion of this important issue in the UK?
The statistics are shocking. The silence, deafening. I think the reasons for the lack of discussion about childhood sexual abuse are complex. The subject is taboo and surrounded by secrecy and shame, which makes it hard for survivors to speak up. Often we’ve been threatened by perpetrators or we are protecting non-abusing family members who don’t want anyone to know. This is a great burden for survivors; it is not our job to keep other people’s secrets or carry shame for other people’s abusive behaviour. We didn’t do anything wrong. For me it was a massive turning point to realise that.

It’s an insidious form of victim-blaming backed up by a distinct lack of appropriate support. The justice system is woeful, prosecutions are rare and compensation is insulting. Instead of justice, our normal trauma responses are pathologised. The number of women survivors diagnosed with Borderline Personality Disorder is shocking – it’s the new ‘hysteria’ – another way to keep women quiet, and in that it is deeply conservative. It’s an unavoidable truth that patriarchy serves itself. As we’re seeing in the news, there are lots of perpetrators in positions of power with vested interests in silencing survivors.

It’s exciting to be part of disrupting that. All cultural shifts happen when oppressed communities come together and represent their interests. As our community comes out of hiding and finds its voice, we will see change.

The abuse survival experience can be incredibly lonely, so it’s a wonderful contradiction to that to be surrounded by a brilliant group of people all pulling together to empower my voice

Tell me about some of the positive responses you’ve had to your previous work. Have other survivors found that it’s helped them?
I’ve been blown away by the response to the work. Audiences react in different ways – there’s relief and catharsis, people cry, laugh and shout out. Every time I perform or speak at an event, survivors approach me to tell me it happened to them. Often I am the first person they have told. Some survivors contact me to share their own stories and creativity – I’ve been sent such wonderful poems, songs, artwork. There is a lot of untapped talent in our community, one of the many very good reasons to champion survivor-led arts practice.

Often non-survivors in the audience reflect on the ways that they have colluded with silencing and victim-blaming, which is honest and heartening. Our emergent community needs allies. The work is a call to arms and people want to know what they can do to help, so we are developing participatory campaigns around each project to be able to better answer that.

Is She walks… a solo piece? Do you also have a team around you?
She walks… has been developed with an amazing team. I co-wrote the song with rapper JPDL and experimental composer Quinta, based on a poem I wrote after walking the Dorset section of the South West Coast Path. We commissioned artist Lou Sumray to make an animation to accompany the track. The unsung heroes are behind the scenes, producers Kate McStraw and Molly Scarborough – they make everything happen.

I often get a joyful emotional moment when working on projects when I’m gathered with a team. The abuse survival experience can be incredibly lonely, so it’s a wonderful contradiction to that to be surrounded by a brilliant group of people all pulling together to empower my voice. I feel very grateful; I live with my story everyday, so I may as well do something with it. But to choose to collaborate on a project about abuse if that’s not your day-to-day – that takes guts.

What do you hope audiences will gain from it?
Because of the cultural silence around childhood sexual abuse, we collectively struggle to articulate the experience and its impacts. The idea behind She walks… is to be part of developing a shared language to enable us to be better at talking about abuse, the way that songs and poems can. Many of us share that experience of feeling deep emotions, and a song lyric playing over in our minds that helps us understand and articulate what we are feeling. That is my hope for the work; that survivor audiences will connect with the story and see something of themselves in it.
The lyrics talk about the experience of dissociation, feeling like our bodies are far away or numbed, as well as the drive to keep going and the belief that something better is possible. We want to share hope but more than that we want to reach out to other survivors and say: “What you feel is real, is normal in the context of trauma, there’s nothing wrong with you, you’re miraculous, you matter.”

And finally, is there anything else that you’re burning to tell me but I haven’t asked?
We’re holding a launch event on the 25 November, the first day of the international campaign 16 Days of Activism Against Gender-Based Violence. It’s a free online event offering a first look at the work, a panel discussion with all the artists and a reading of the poem that inspired the track. Sign up here.

We really want people to join us in making a noise about abuse, so we are running the #MyLineInTheSand campaign at the same time. It’s an invitation for survivors and allies to write words of hope, rage and solidarity in the sand (or in anything – paint, salt, pebbles, fridge magnets….) and share on social media. You can follow us on our Facebook page Viv Gordon Company or on Twitter and Instagram on @VivGordonCo to get involved.

The feature image is a photograph of Viv Gordon on a coastal walk making She walks… She is smiling with her eyes crinkled up and looks directly into the camera. She is surrounded by rocks and her short hair is being blown by the breeze.

The image in the text is taken from Lou Sumray’s animation for She walks… It shows a drawn smudged grey figure on the far right of the image who looks as if they are walking forwards off the edge of the page. A shadow of where they have been is showing behind them.