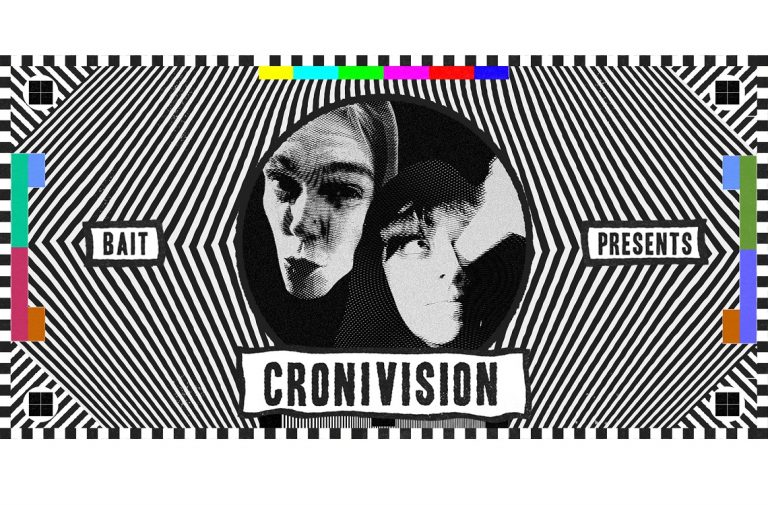 The unsettling world of the crone

On a chilly Friday night from the comfort of my own living room, I click on a link from Bait Theatre to their show Cronivision delivered over Zoom. As instructed I am ready with something delicious to drink in a glass (some craft beer), paper, pen and headphones – though in the end the pen and headphones prove unnecessary. A show based on crones follows on nicely from their 2019 Edinburgh show that investigated the archetype of the princess.

Cronivision begins slowly. On one screen (screen name “The hands of fate”) we can see an image of an old-fashioned television, showing a picture of a waiting room. We’re instructed via the chat box to put on our cameras and microphones and “give voice” (i.e. speak or make noise). With little encouragement, a remarkably keen and gung-ho audience gets involved right away. Finally performers Michelle Madsen and Lizzy Shakespeare appear on screen in their crone guise playing “Right Hand Crone” and “Hecate’s horsehair whip”. In keeping with the crone archetype, they wear headscarves and are hunched over. They peer into the camera as though they are a little short-sighted. At first it seems like they cannot find each other. They cross in front of their cameras and call out to each other. They talk about putting the kettle on, the weather and how it is “dangerous on the Hertfordshire Bedfordshire border”. They’re definitely talking at cross purposes. But at last they find each other and discover us, the audience.

I turn my Zoom to gallery view as they describe those with their cameras on in some detail and with great humour. A group of three watching are immediately identified as a ménage à trois. Those who haven’t remembered or thought to put their drinks into glasses as instructed are gently berated. They speak as if we could reach out of our own Zoom squares and touch those to either side of us.

It’s notable how good the pair are at putting the audience at our ease. As the show develops with more audience interaction, more and more cameras are turned on. We’re directed to take notice of our fellows, but it never feels like we’re being overly watched (although we are), or judged (which we are not).

Between each interactive segment, there is recorded, edited video with voiceover. Each one of these sections interrogates an aspect, possibly a stereotype, about modern womanhood. A woman wrapped in a towel sits at a table pushing her fingers into a red pepper, clearly a sexual metaphor, while we hear the words: “I can do it all from my kitchen table”. Later we see legs writhing in a bath while we hear a voice talk about making cocktails with blood and the beach at Walberswick. Someone speaks of childbirth while we peer at a naked body and worms.

In some ways this is a difficult show to describe. It’s performance art rather than traditional theatre. It is not clear to me exactly what this is all meant to add up to, but that probably doesn’t matter. We’re on a journey together into the world of the crones, and their unique take on women’s lot in general. Near the end the performers ask the audience: “Is this where you wanted to get to?” Since I didn’t really know where we were going when we set out, it’s hard to answer yes or no.

Although the show feels very chaotic, the performers’ WiFi holds out and the breakout rooms work. Nearly all of Zoom’s features are used in one way or other. It’s also very funny; Shakespeare and Madsen’s clowning background comes over strongly particularly during their crone interactions.

That we are each alone in our little boxes is referenced constantly, but we are also encouraged to make connections and really, really look at each other

The piece is incredibly influenced by lockdown. One performer is in London and the other is in Berlin. That we are each alone in our little boxes is referenced constantly, but we are also encouraged to make connections and really, really look at each other. In person this could feel very invasive, but of course when you can turn your camera or laptop off at any moment, you have the security to be just a little bolder than you might be otherwise. This performance would not work in any other format.

In their press release Lizzy Shakespeare writes: “I was feeling frustrated and depressed with my experiences of Zoom – I would see friends and then feel so sad afterwards because we had not been able to touch or share space. I wanted to make a performance that made people feel whole, that didn’t leave a tang of sadness when it finished”. And in this I think they succeed.

By the end of the show, I do feel a connection to my fellow audience members. I feel if I bumped into one, when this is all over and we can go to a bar again, that we might feel minded to have a quick drink and reminisce about that odd show we saw in the middle of a pandemic.

Cronivision is on again on 25, 26 and 27 February with further dates planned in March, April and May. Tickets available here.

The feature image is the publicity image for the show. It is modeled on an old-fashioned television test card with a black and white image of the two crones in a circle in the centre. The words “Bait”, “Present” and “Cronivision” are in white blocks around the circle and it’s all against close-set black and white lines in a diamond pattern. There are coloured blocks mostly in primary colours on the top, left and right edges.

The picture in the text is a black and white photograph of Michelle Madsen as a crone. She has a scarf over her head and is holding a paper tube to her left eye, which looks like it is glowing. She looks directly at the camera and is smiling slightly.