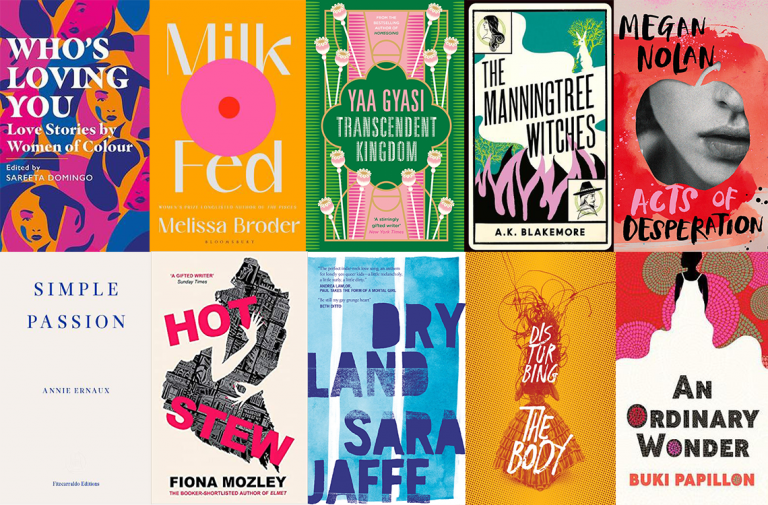 Who’s Loving You? is a celebration of love in all its guises written by women of colour, with ten original short stories from bold new voices, literary prize-winners and national treasures. In this extraordinary collection, ten writers explore the full spectrum of love in all its messy, joyful, agonising and exhilarating forms. Celebrating and centring the romance, passion and desire of women of colour, these stories burn with an intensity and longing that lingers long after the final page. Featuring authors such as Rowan Hisayo Buchanan, Sara Collins, Danielle DASH and many more.

As a child Gifty would ask her parents to tell the story of their journey from Ghana to Alabama, seeking escape in myths of heroism and romance. When her father and brother succumb to the hard reality of immigrant life in the American South, their family of four becomes two – and the life Gifty dreamed of slips away. Transcendent Kingdom is a searing story story of love, loss and redemption, and the myriad ways we try to rebuild our lives from the rubble of our collective pasts.

The Manningtree Witches by A. K. Blakemore (4 March, Granta)

England, 1643. Parliament is battling the King; the war between the Roundheads and the Cavaliers rages. Puritanical fervour has gripped the nation, and the hot terror of damnation burns black in every shadow. In Manningtree, depleted of men since the wars began, the women are left to their own devices. The Manningtree Witches plunges its readers into the fever and menace of the English witch trials, where suspicion, mistrust and betrayal ran amok as the power of men went unchecked and the integrity of women went undefended. It is a visceral, thrilling book that announces a bold new talent.

To make a beautiful man love and live with me had seemed – obviously, intuitively – the entire point of life. My need was greater than reality, stronger than the truth, more savage than either of us would eventually bear. How could it be true that a woman like me could need a man’s love to feel like a person, to feel that I was worthy of life? And what would happen when I finally wore him down and took it?

Megan Nolan’s debut novel charts the course of an obsessive love affair between a woman in her early twenties and an older man in its darkest and most all-consuming moments.

In her spare, stark style, Annie Ernaux documents the desires and indignities of a human heart ensnared in an all-consuming passion. Blurring the line between fact and fiction, she attempts to plot the emotional and physical course of her two-year relationship with a married man where every word, event, and person either provides a connection with her beloved or is subject to her cold indifference. With courage and exactitude, Ernaux seeks the truth behind an existence lived, for a time, entirely for someone else.

Pungent, steamy, insatiable Soho; the only part of London that truly never sleeps. Tourists dawdling, chancers skulking, addicts shuffling, sex workers strutting, punters prowling, businessmen striding, the homeless and the lost. On a corner, sits a large townhouse, the same as all its neighbours. But this building hosts a teeming throng of rich and poor, full from the basement right up to the roof terrace. Precious and Tabitha call the top floors their home but it’s under threat; its billionaire-owner Agatha wants to kick the women out to build expensive restaurants and luxury flats. Men like Robert, who visit the brothel, will have to go elsewhere. Those like Cheryl, who sleep in the basement, will have to find somewhere else to hide after dark. But the women won’t go quietly. Soho is their turf and they are ready for a fight.

It’s 1992 in Portland, Oregon. Fifteen-year-old Julie Winter moves through her days as if underwater – watching skaters through the constant rain, detached from her best friend’s crushes, listening to the same REM B-side on repeat. The rest of the world is caught up in the AIDS crisis, the war in Yugoslavia, and grunge. But to Julie it’s all background. Yearning, stifled, and sharp, Dryland is an anti-coming out novel that captures gauzy queer exploration at its quietest and its most loud.

A subversive new anthology of speculative memoir about misbehaving bodies, Disturbing the Body sets out to explore the many ways women feel powerless and at odds with their own bodies. In a dozen stories reflecting memoir, experience and body horror, this is an anthology full of heart that is not for the faint-hearted. Featuring authors such as Verity Holloway, Natasha Kindred, Lauren Brown and many more.

Richly imagined with art, proverbs and folk tales, this moving and modern novel follows Oto through life at home and at boarding school in Nigeria, through the heartbreak of living as a boy despite their profound belief they are a girl, and through a hunger for freedom that only a new life in the United States can offer. An Ordinary Wonder is a powerful coming-of-age story that explores complex desires as well as challenges of family, identity, gender and culture, and what it means to feel whole.