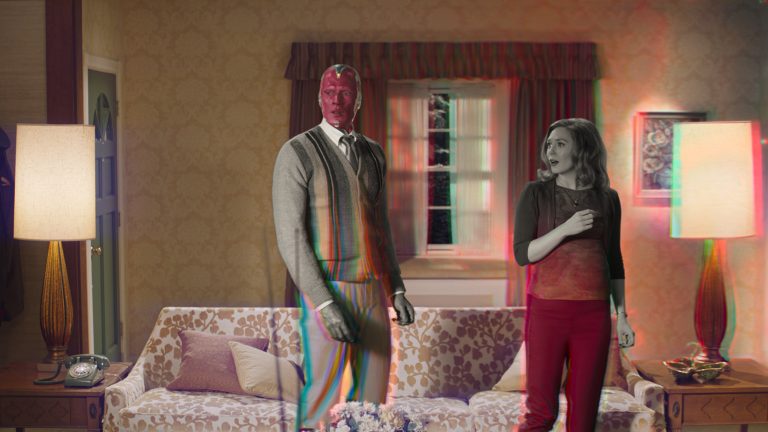 Wandavision and the shape of grief

One of my first memories is being at the cemetery. In the memory, I carry a blue plastic watering can with both hands which is heavy with water. I am only four years old at most. I skip over the homes of the dead as I follow my mother and older siblings to a grand oak tree that shades a flowered grave. It is where we buried my father’s ashes after he died of stage IV colon cancer in 1998 – only two years before this memory transpired. Growing up, my father’s death permeated the house as if it occupied the very air we breathed. It simmered beneath each moment, each interaction.

This is why the depiction of Wanda Maximoff’s (Elizabeth Olsen) grief in WandaVision felt so familiar to me. This is a show that is about many things, including the power of a woman driven to the brink by sorrow. I saw my mother in Wanda – in her ability to control reality and escape the pain of losing her parents, her brother and the love of her life. Both of them leveraged their pain to build a meticulously curated reality from the ashes of their grief. In Wanda’s case, she crafts a world around her of sitcoms and white picket fences in Westview, New Jersey where she recreates the sets of popular shows like The Dick Van Dyke Show, Full House, Malcolm in the Middle and Modern Family. She even hypnotises the town’s residents into playing characters in her ‘perfect’ world.

The sitcoms she replicates were ones I grew up watching. My mother would put them on, and though I didn’t realise it, I now believe it was an effort to echo a better time and a reminder of the life my mother had dreamed of having with someone like my dad.

In curating her own world, Wanda’s main goal was to anchor a sense of control within the chaos. My mother did the same after losing my dad. She meticulously planned out the family’s schedule and aimed to control the minute details of her children’s lives. As we got older, my mother delayed our getting mobile phones and driver’s licenses, and even prevented us from dating; she constantly reminded us that she was the parent, and we, her children. Each reinforcement of our assigned roles was an echo of reassurance to my mother that all was well. But even though my mother curtailed our every activity, she could not block out her pain, just like Wanda, nor could either stay in control forever. From a young age, I became paranoid that I would lose someone again. I never let my mother leave the house without telling her I loved her, no matter how angry she had made me on a given day

For Wanda, I’m thinking specifically of the growing dread that punctures the picturesque suburbia that she has created. In a scene where external governmental officials try to contact Wanda through a radio in her curated world, Wanda’s eyes widen as a static voice pierces through the 1960s music. The voice asks, “What have you done Wanda? What have you done?”

Or when Wanda’s synthezoid husband, Vision (Paul Bettany), begins to work out that all the members of Westview are under Wanda’s control and, when their hypnosis is broken, they beg for his protection from her.

This ever-present tension that Wanda’s control is slipping away felt familiar to me. I would wake up to the cutout silhouette of my mother sitting on the edge of my bed. Some nights her shadow would list off worries that had come to her at two in the morning: what if we were sneaking out at night? What if we moved far away and didn’t come home? It was a way of processing her anxiety in having to do the parenting thing alone. Other nights, after fights with her second husband, it would simply be: “I miss your dad”. The words would thud like a full stop, definite. There was nothing to be said after that, except “I know,” with a loving squeeze of the hand. It was as if she had woken up in the middle of the night to the horror of her reality: like a Wanda without her Westview.

One of the writers for WandaVision, Laura Donney, said in a tweet, “I told a therapist once that my trauma defined me. She said no: it shapes you.” When I read this, I wondered if my mother would agree

In watching my mother and processing my own loss, I learned how grief has a way of taking up space, altering ordinary thoughts and actions. From a young age, I became paranoid that I would lose someone again. I never let my mother leave the house without telling her I loved her, no matter how angry she had made me on a given day. I worried constantly that one of my siblings would get cancer like our father and that I’d lose them, too. I’ve had nightmares of my father’s grave being empty or him returning, having faked his death. I’ve even written scripts, poems and short stories that told the unfolding horror of a widow digging up the body of her lost love and preserving it as if they were still living. Yet, I could never find the key to unlocking the story I was trying to tell. The women-led writing room of WandaVision was able to capture that story, complete with Wanda bringing the love of her life back from the dead. Wanda’s loss fuels her to build a world that succeeds in blocking out her pain, but she eventually defies the very factors of her loss. Ultimately, it returns to the question of our relationship with unfathomable grief.

One of the writers for WandaVision, Laura Donney, tweeted, “I told a therapist once that my trauma defined me. She said no: it shapes you”. When I read this, I wondered if my mother would agree. I am told that on the night of my father’s death she held us and whispered, “We’re all going to get up in the morning. For each other”. Grief is embedded in a need to survive, to reshape one’s self in order for one’s life to become liveable, bearable. It alters our interactions with the world around us, like Wanda’s need to create Westview, or my need to tell my mother I loved her before she left for work. I have pictured how my mother would be different if my dad was still alive. Sometimes I even imagine it for myself: a girl like me living in an alternate reality with a father who didn’t die when she was two, who didn’t lay awake at night holding the hand of her ever-grieving mother. I have asked myself what is different about that girl. But maybe I have been looking at it wrong. Perhaps I would not be all that different, nor would my mother. Rather, the way we carry ourselves would alter. For, as Vision says to a grieving Wanda, “What is grief, if not love preserving?”

Or rather, what is it to hold grief, if not to walk through life carrying the weight of those we’ve loved and lost with nowhere to put down our burdens?

Images courtesy of DMED.
Image description:
1. Wanda and Vision stand in their living room wearing clothes from the 1960s or ’70s. They appear surprised, as the colours in the room fade out and their bodies turn from black and white to colour.
2. A close-up of Wanda’s face as she cries. She appears grief-stricken. She is somewhere outside, with green in the background.