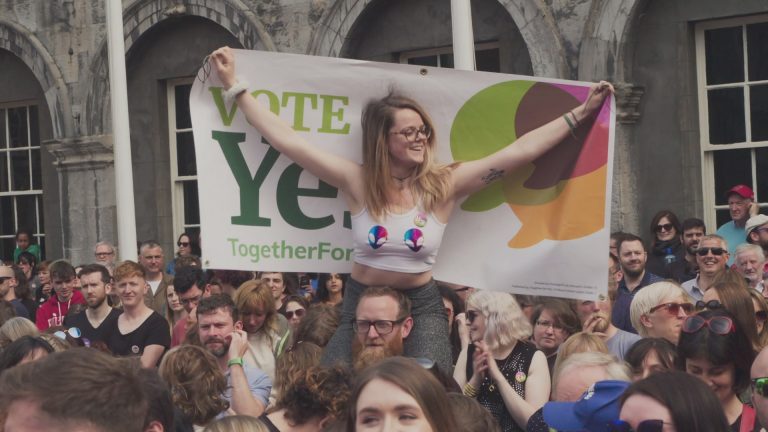 The 8th has a clear message: empathy

Hailed as “an unmitigated story of triumph” by Screen Daily, The 8th follows the fight for the repeal of the eighth amendment in Ireland which, for decades, had restricted access to reproductive healthcare.

The Eighth Amendment of the Constitution Act, 1983 was an amendment to Ireland’s constitution that guaranteed the unborn the right to life, making abortion illegal (with the exception of cases in which the mother’s life was at risk due to the pregnancy). Even before the amendment, abortion had been punishable in Ireland since 1861 – the amendment only strengthened the government’s hold over women’s bodies and reproductive rights.

The documentary stretches across a three-year period between 2017 and 2019, covering the fight for the repeal of the eighth amendment and looking at what the future holds for abortion rights.

Despite featuring both sides of the debate, the film focuses on Irish activist Ailbhe Smyth, who has been fighting for people’s right to access abortion since the 1983 act, and Andrea Horan, the co-presenter of the podcast Don’t Stop Repealin’.

Smyth started the Women’s Study Forum at her university in the early 1980s as a space for women to discuss issues directly affecting them, such as the eighth amendment. She has been lecturing since the age of 21 and founded the Women’s Studies Centre at University College Dublin, where she stayed until 2006.

Horan, on the other hand, admits that politics was not her original calling. She now refers to herself as a “glitter activist” who brings politics into her world at the Tropical Popical nail salon.

Despite the differences between the two women, their fight to repeal the eighth amendment signifies the unity, power and strength of the movement.

When Smyth discusses her lengthy battle for reproductive rights in Ireland, she casts the viewer’s mind back to 1992, when a 14-year-old girl was denied access to an abortion after being raped. This would become known as the X-case. The young girl had told her mother that she was having suicidal thoughts, and her parents had intended to travel to the UK so that she could access an abortion. The attorney general obtained an injunction preventing the girl and her parents from leaving the country. Eventually, the supreme court in Attorney General v X ruled that the girl could have an abortion because suicidal thoughts posed a serious risk to her life. The film makes it clear that the X-case, when the safety and life of a 14-year-old girl became an issue of debate for powerful men, cannot be forgotten when discussing abortion rights in this new century. In 2012 Savita Halappanavar died after suffering a miscarriage. She had been miscarrying and in immense physical pain yet, because a foetal heartbeat remained, she was denied access to an abortion. After suffering the eventual miscarriage, Savita Halappanavar was admitted to hospital, where she later died. As stated in the documentary: “If she had the termination when she asked for it then she would be alive today, and we would not be talking about it. Nobody would have ever heard of her.”

As footage of protests surrounding the unfortunate death of Savita Halappanavar plays, chants of “never again” bring us to a 2017 protest with Irish women dressed as handmaids. This protest took inspiration from Margaret Atwood’s The Handmaid’s Tale, in which women are forcefully impregnated and forced to give birth against their will.

The documentary goes on to highlight another important moment that year: the remains of thousands of babies were discovered at the former Bon Secours Mother and Baby Home in Tuam, County Galway. For decades, unmarried pregnant women were forced into this home, where they were separated from their children and forced into unpaid labour. As the remains were found, it uncovered a conversation around how women and mothers have been treated in Ireland and whether it was time to bring it to an end.

As the referendum date loomed, the ‘Yes’ campaign led by Smyth decided upon its main talking point: empathy. To many up and down Ireland, the repeal of the eighth amendment was a nuanced issue with a variety of takes, which the film documents in detail. However, the resounding argument shown in the documentary was that if you empathise with life, any life, the decision was clear – to repeal the eighth amendment.

Empathy would have provided girl X with a future devoid of further trauma.

Empathy would have given decades of mothers and children in County Galway the opportunity to live their lives free of shame rather than hidden away.

Despite the centuries’ long torment, empathy prevailed. After being put to a referendum on 25 May, 2018, the majority (66.4%) voted in favour of repealing the amendment.

Three years on, The 8th is released in the UK and Ireland.

The 8th is released in cinemas on 25 May.

Images courtesy of Sarah Harvey Publicity.
Image description:
1. A young woman emerges from a crowd by standing on a man’s shoulders. She has her arms open wide to showcase a poster with “VOTE YES” on it. The image appears to be set during a protest.
2. A memorial to Savita Halappanavar. Her portrait is painted on a wall and surrounded by cards with the word YES on them. Flowers lay on the ground in front of it.