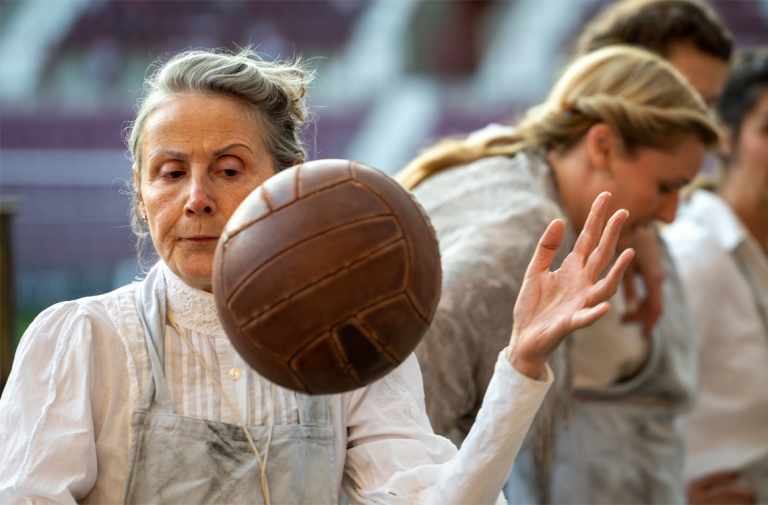 The first thing to say about this year’s Fringe is that it is much, much smaller than it was in 2019. Sure, it’s 1,000 or so in-person shows this year, which considering the year we’ve had might seem relatively decent next to 2019’s 3,500. But many of these are only on for a few nights which means nearly everything is selling well or selling out. It does make for a more relaxed experience; venues like the Pleasance Courtyard are far less crowded and show queues are being let in much earlier. But I strongly suspect that the market forces that previously made the Fringe bigger (and more expensive) year on year haven’t gone away, for all the talk of “new business models”.

The second thing to mention is that the majority of the comedy is being presented as work-in-progress (WIPs) since no one’s had a chance to work on a show in the lead-up. So there aren’t any comedy reviews here, but from several really great WIPs I’d like to give a special shout-out to Catherine Bohart at the Monkey Barrel. I really like both football and women’s history, and I thought that I already knew quite a bit about the history of women’s football in the UK, but there is a huge amount in Paul Beeson & Tim Barrow’s play with songs that is new to me. The story is based on real-life events and concerns a works women’s team set up during the First World War who deal with prejudice and bureaucracy to be able to play.

The show is performed on a specially built stage in the corner of Heart of Midlothian Football Club’s ground, and there is something lovely about being able to see the actual pitch where some of the historical matches were played while I watch the show. The design in general is really strong, with the knickerbockers and smocks that the women wear to play a highlight. The setting and audience, many of who are Hearts supporters, add to the atmosphere with jokes about Hearts’ rivals, particularly Hibernian Football Club, really hitting their mark.

The all-female cast are superb, with funny character work and moving moments, although it would be nice to see a bit more diversity beyond age. But this is a really enjoyable full-length show, performed in the perfect place. Amelia Gann’s one-woman show, presented on an outdoor stage in the rear courtyard at the Pleasance, has a lot in its favour. It uses music and dance brilliantly to help tell the story and the plotting is dense; a lot is packed into its 45 minutes. It tells the story of Cathy, a woman who has always wanted to be a dancer, but has ended up a Zumba (a licenced dance-based fitness workout) teacher instead and is pretty unhappy with her lot in life. Gann’s writing and delivery is funny, with characters drawn deftly with just a movement or a line of text.

Given all this, it’s a real shame that so many of the jokes are at the expense of older people. It’s true that Cathy is not a particularly sympathetic character, so her disdain of the older people she teaches can be excused, but when I find myself sitting in an audience laughing at physical impressions involving hunched backs, dodderyness and confusion it feels more cruel than ironic. A pity when there is so much in Zumba Gold that is excellent.

The all-female cast are superb, with funny character work and moving moments Penny Chivas’ one-woman show is a combination of dance, spoken word and singing reflecting on climate change in Australia. At the beginning she explains that she began creating it during the Australian wildfires of late 2019, but with the current crisis in Greece and Turkey, plus the other extensive wildfires that have happened around the world since, it seems urgent and very relevant.

It’s a very abstract piece and not necessarily easy to follow – looking at the show notes later I see that the bird sounds in the soundscape are magpies which have learnt to mimic emergency sirens and so on – but I’m afraid in the moment this is lost on me. The general concept is clear however: humankind has walked directly into a crisis that we knew was coming.

Chivas’ performance is committed and precise and the music from Paul Michael Henry and lighting from David Bowes combine together to create a mesmeric if opaque experience. I experience Duty | Tour through headphones as I walk through some of the streets and a housing estate close to Hepburn House, Edinburgh’s Army Reserve Centre. The instructions for where to walk are delivered as part of the story and work very well; there’s little chance of getting lost. As I walk I hear the story of two women who joined the Army Reserves (Territorial Army) at the same time and became friends. Something significant has happened, though that’s never fully explained, and one of the two friends, our narrator, isn’t quite sure what she should do.

The story touches on the role of women in the army – whether they are accepted and whether their acceptance relies on them not rocking the boat – but it’s over too quickly to delve into these subjects quite as much as I’d like.

How the story works with the environment is brilliant and gives a great opportunity to look at parts of Edinburgh’s New Town with fresh eyes. They Eat Culture’s creation is a superb combination of storytelling, psychogeography and community.

Plasters is a new play by Emma Tadmor who also appears in it alongside Julian Chesshire. It begins as a relatively heteronormative piece with a couple bickering over their in-laws and deciding what to have for lunch, but towards the end of the play the structure becomes far more interesting as it delves further into what the female half of the couple is experiencing, and particularly whether she can rely on her own memory of what is real.

There is a lot to explore here, and so I think it is a shame that the writing spends so very long establishing the (presumed) relationship before getting on the meat of the ideas. I am also puzzled why the company decided to put two tables, a chair and an airbed on a fairly small stage, giving the actors very little room to move. They often seem constrained, especially during the moments of heightened emotion.

The acting from Tadmor and Chesshire is good, and there’s definitely something here. It just might benefit from a stronger editing hand and slightly pared back direction.

What Bogg-Hargroves does excellently is incorporate her lead character’s conversations into the show through well-timed voiceover and her reactions while this is happening are surprising and funny. She’s a very likeable performer and this is a well-constructed show that covers far more than just boring jobs, sex and relationships. Life really isn’t always easy when you’re in your 20s.

Image 1, the feature image, is by Simon Messer. It is a production shot from the show Sweet F.A. and shows an Edwardian leather football is mid air, thrown by a woman in 1910s dress who is looking at it. There are other women behind her, out of focus.

Image 2 is also from Sweet F.A. and is also by Simon Messer. It shows 2 rows of female footballers in 1910s football kits and scarves. They are holding their hands up in celebration.

Image 3 is from Zumba Gold and is by David Wilkinson. It shows a grinning woman in colourful athletic gear, dancing. She is against a bright orange background.

Image 4 is from Burnt Out and is by Brian Hartley. It shows a person picked out by a spotlight in darkness. They are wearing a grey boilersuit. Their left arm is covering their mouth and their right is raised, fingers outstretched.

Image 5 is from Duty | Tour and is by Ruth Heritage and Chris Mason. It shows two women in military uniforms walking down a residential street, their backs to the camera. The show logo and funders’ logos have been superimposed in white.