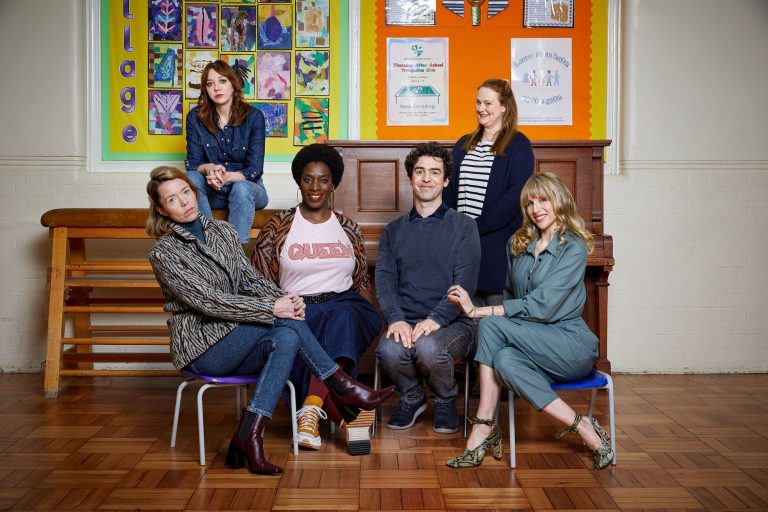 What Motherland gets wrong about breast cancer and why it matters

I love the show Motherland on BBC 2. The sitcom stars Anna Maxwell Martin as Julia, mum of two, wife to a feckless husband, a sort of every-working-woman who is constantly on the verge of being overwhelmed as she tries to balance the manifold demands that her family and job place on her. It is funny and warm, drawing emotional depth from the way that it highlights the cracks in the model that so many young women have been raised to aim for (and that so many women are made to feel guilty for attempting or not attempting): having it all. Even the phrase is loaded, suggesting that the desire to find purpose in both career and family is somehow greedy or asking too much. It is rarely said of men that they “have it all” – it is assumed that they will and that women will facilitate it.

Motherland is built on neat observations of the realities of parenting. It makes me feel slightly better about my own efforts to balance work and family. There is a scene where Julia shuts herself in the bathroom and screams into a pile of towels, which could be real-life footage from my house. The supporting ensemble draws on a series of familiar personalities to be found at the school gates: from the seemingly perfect, always put-together Amanda (Lucy Punch) to Kevin (Paul Ready), the stay-at-home Dad who cycles everywhere. The show manages to avoid lazy stereotypes, opting for nuance and texture instead. The characters operate at extremes, but they are broadly relatable, likeable and, for working mothers like me, reassuringly incompetent. How, then, did a show rooted in relatability get its take on breast cancer so woefully wrong? In the first episode of the third series, penned by Holly Walsh, Helen Serafinowicz & Barunka O’Shaughnessy, the character Meg (Tanya Moodie) reveals a diagnosis of breast cancer and receives the “all clear” in Episode Four. In between, she shaves her head (which happens to suit her), is treated to a pampering Mother’s Day and has a little cry. There is so much wrong with this portrayal of breast cancer and it jars against the tone of the show so badly that it is difficult to know where to start.

For context, my Mum was diagnosed with breast cancer when she was 42. Following chemotherapy, surgery and a course of radiotherapy she then lived cancer free for nearly ten years before she was diagnosed with metastatic breast cancer that, in the end, proved terminal. She left us at the age of 55. It was difficult and devastating. It was also messy and incredibly complicated. This is partially where I come from with this critique and why I found the few episodes in which Motherland dealt with breast cancer so frustrating to watch.

There are broader cultural narratives around breast cancer that are problematic and I think it is important to understand they can harm individuals in different ways. There has been much discussion of why the language we use when talking about cancer matters. Referring to cancer as “a battle” can be damaging because this sort of military language suggests that you are engaged in a reasonably fair fight and that whether or not you survive the “battle” is something that is actually in your control. If you die, it’s because you weren’t quite strong enough, didn’t fight hard enough. The bittersweet thing about this narrative is that I watched my Mum draw great positivity from it. She drew strength from the story she was telling about herself: that she was strong, she would survive this, that, as she once said, she would see her children grow up. What she was gaining, I think now, looking back on it all, was a sense of control that she did not have. If you allow that it was her strength and positivity that helped her to survive the first cancer, you then surely have to allow that it was a failure of those things that caused her to succumb – which is doubly painful, deeply unfair and, of course, untrue.

If you break your leg, you aren’t expected to mend it through positivity or force of will. You take the treatment and the inconvenience and the medics do their work. You are entirely allowed to be fed up and a bit depressed; somehow with cancer, and particularly breast cancer, this doesn’t seem to be the expectation. The term “cancer survivor” is tricky too; it suggests that the threat has passed when the constant fear is that it has only abated. Motherland’s breezy suggestion that one can get the “all clear” via a quick phone call on a school trip is, again, frustrating; you never get the all clear. You get a series of appointments that show you are cancer free.

Just as the language we use around breast cancer matters, so does its representation. Yes, Motherland is a sitcom. However, the speed and seeming ease with which it was dispatched felt glib and out of step with the everyday rawness the show specialises in. It is particularly disappointing because it presumably chose the most common type of female cancer in the UK for a reason that it is something that many women and many mothers have experienced. It’s worth noting that for many women who are diagnosed earlier in their life, the treatment can involve bringing on the menopause in addition to the amputation of your breast or breasts. The menopause is in and of itself an emotionally and physically complex, draining experience.

I remember watching an episode of Sex and the City with my Mum (yes, we watched Sex and the City together; yes, it was often excruciating). It was the episode where Samantha (Kim Cattrall), who is being treated for breast cancer, has a hot flush whilst she is supposed to be delivering an inspirational speech to a breast cancer benefit. The organisers sit, munching their pink ribbon cookies and sneering as Samantha is clearly struggling to manage the hot flush, with the added insulation of her wig and heat from the lights. In a show that is problematic in so many ways, Samantha breaking from her speech about the “face of breast cancer”, to deliver the line, “Oh fuck it, she’s me and if any of you are having hot flushes like I am then you deserve a fucking medal,” is, frankly, fantastic. She goes on to remove her wig as do lots of other women in the room and receives a standing ovation. I remember that scene making my Mum cry but it also made her joyful; and re-watching it in order to write this, it made me cry and feel joyful too.

In my experience of breast cancer, the most important tool you can work with is hope. Sanitising the experience of a mother with breast cancer does not convey hope but makes the experience seem shameful somehow, something to hide like a balding head under a wig. Motherland’s storyline is alienating in a way the Samantha scene trades in relatability – not something I think has often been written of Sex and The City. The difference is evident through the wider audience’s responses too: the comments on the Samantha clip on YouTube include lots of people who, like me, are reminded of a loved one who was ill and found some joy in it. Conversely, regarding Motherland, reviews echoed my sentiment: love the show, hate what it’s done with breast cancer representation. If a show built on the premise of relatability is falling short of Sex and The City in all its silliness, it’s probably got it all wrong, which is both a shame and a missed opportunity.

Motherland is streaming on BBC iPlayer now.
For guidance on how to check your breasts please see the NHS page here.

Images courtesy of IMDb.
Image description:
1. The lead characters of Motherland sit in a semi-circle in what appears to be an empty classroom. Colourful posters hang on the wall behind them.
2. A close-up portrait of Meg (Tanya Moodie) speaking to someone off-screen.