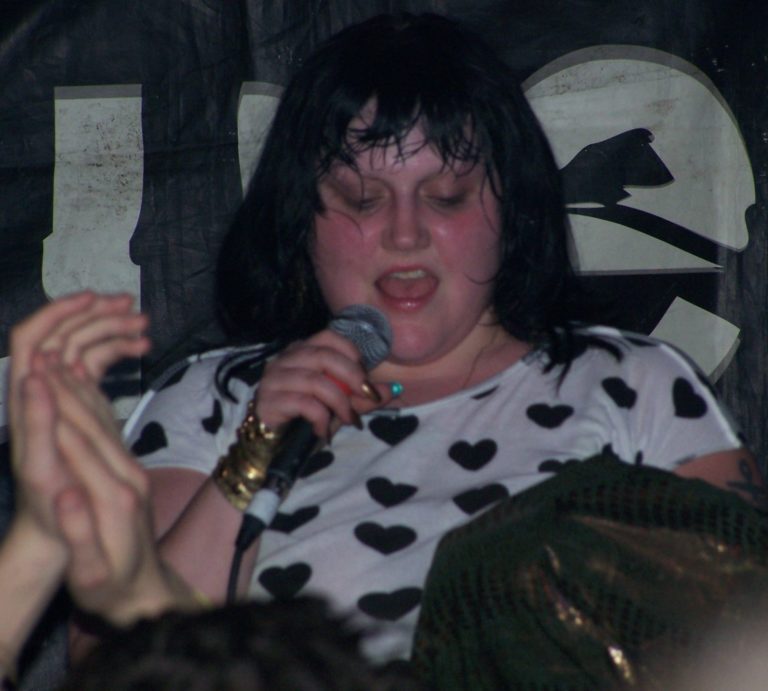 In this outrageously hot and humid summer, Manchester’s Night & Day café provides a small, slightly dishevelled, oasis of cool, what with its bohemian gloom, as it plays host to The Gossip, and whilst it initially seemed that the heat had put people off coming, by the time the band took to the stage, the place was hotting up as more and more people streamed inside.

The energy was there from the moment the band started the first song, Hannah beat her drums with a kind of intense aggressive passion, whilst Brace on guitar loped along with the melody as Beth strutted (“I can’t walk in high heels,”) shimmied, and danced as she sang with that same intense passion. She has the kind of soulful voice that makes you weak at the knees and sends a shiver down your spine, especially on slow songs like ‘Coal To Diamonds’, which reveals a real tenderness and vulnerability. A recent NME live review compared her to Aretha Franklin, Janis Joplin, and Dusty Springfield, and it’s hard to disagree with those comparisons, as she really is that good. This isn’t someone who is copying a particular vocal style; this is someone who sings with such naturalness, ease, and sincerity, that she really is the genuine article.

Unrepentantly loud and proud, its also refreshing to see The Gossip openly embracing and paying tribute to the gay punk scene, by introing a particularly heartbreaking song with the line, “this is a homosexual love song,” and following it up with ‘Yr Mangled Heart’ (“and this is for the fags…”) which sends the melting crowd into a slow pogo. Prior to that, Ditto mentions how great it is to see more “dykes and fags” at their shows across Europe and Britain, and in summing up Manchester as “the gayest town,” she refers to the home team: Hooker and Valerie, both of whom are present tonight, and both of whom supported The Gossip on an earlier visit to the city.

For the uninitiated, Hooker (named after a line from ‘Beauty School Dropout’ from ‘Grease’) come across like the Stooges fronted by Manchester’s answer to Corin Tucker, and play fast and furious punk with a surprising sexual frankness and occasional vulnerability, whilst Valerie (named after Valerie Solanas) play fiercely energetic riot grrrl and hip hop influenced skittery punk with autobiographical/localised lyrics. You can also add Ste. McCabe to the list, who played with Hooker eleven days ago, also at the N&D, who comes across like a one man Buzzcocks, only more gay, and more pissed off. What all three share in common, and what they also share with The Gossip, is that sense of being outsiders, of having an outside perspective of the gay scene, of not being a part of it, whilst still being gay and therefore, not part of the straight scene either.

‘Yr Mangled Heart’ was just one of the highlights in a very strong, tight, energetic set, which featured songs from the ‘Standing In The Way Of Control’ album, alongside earlier tracks, such as ‘Swing Low,’ from the ‘That’s What I Heard’ album. Audience participation, instigated by Beth, is at its peak during the intro to ‘Listen Up’, with most of the audience providing handclaps. Aside from ‘Yr Mangled Heart’, it was ‘Standing In The Way Of Control’ itself that incited the wildest dancing and all round hedonistic fever. Already something of a dancefloor anthem in Manchester, (well, at Shake-O-Rama! anyway…) the moment the pounding drums began, and the cool Delta 5 esque bassline kicked in, the place was in uproar. Not only is this song the ultimate synthesis of punk, rock’n’roll spirit, and disco, it’s also a call to arms on the dancefloor. For those feeling the pressure (“Your backs against the wall, there’s no one home to call, you’re forgetting who you are, you can’t stop crying”) it exhorts them to hold on and keep on trying, keep on fighting, a sentiment reinforced by the staccato beats of the drums, hammering home the vocal intent: “Standing, in, the, way, of, control. Survive, the, only, way, that, you, know.”

This was the last song in a brilliant set and, unsurprisingly, the band were called back, still mopping their faces with the towels that had been on standby throughout the set. They played a couple of old favourites, and were gone almost too soon really. Their set seemed to fly by, and we were left longing for more, despite the horrendous heat. Such was the level of adoration that we would all have happily melted where we stood if only we could hear them play as we turned to mush.

Image of Beth Ditto by Emma Pop on flickr. Image used according to a flickr creative commons licence