Bad Reputation is a new UK feminist blog, or, as their subhead would have it, “a feminist pop culture adventure”.

Only launched at the beginning of this month, there’s already lots of good, long-form posts to read, including the ‘Alphabet of Feminism’ series (on the letter ‘B’ at the time of writing).

Given the inspired name, though, I want to point out Bad Reputation blogger Miranda’s review of The Runaways, which is, finally, out in the UK. 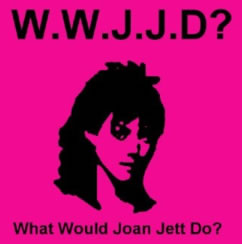 Really interesting take, particularly on the subject of how Cherie Currie (Dakota Fanning) is objectified, and the complexities of this dynamic in the band:

Currie is pilloried by her bandmates for taking on photoshoots – the same bandmates who urge her to “just sing the line, okay?” in a stressful rehearsal for Cherry Bomb. Stewart’s portrayal of Jett, even as she pours scorn on her friend, doesn’t seem unaware, even quietly, that it is precisely the pervy spotlight on Currie that lets her be the tomboyish backbone of the band, the one who doesn’t have to do it.

The inner life of the relationship between Currie and Jett in this film exists as a kind of hideaway separate space to the public image of the band, and not in a hidden-forbidden, secret-sappho way either. Yes, they get it on, no, it’s not explicitly filmed (Fanning is not, after all, of age for that kind of treatment), but most importantly it’s completely uncommented on by the rest of the cast, and neither Jett nor Currie approach proceedings with one jot of identity-angst about it. Jett, particularly, is seen kissing both genders without comment before she even crosses paths with Currie, and the sexual element of her relationship with Currie isn’t tacked on for cheap thrills….

First image is the Bad Reputation logo, second image is of the ‘What Would Joan Jett Do?’ t-shirt