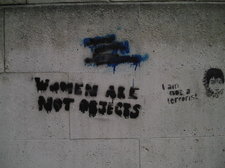 On a day when the country paused to, amongst other things, watch a media baron being ‘flanned’ in the House Of Commons, the shortlist for the annual Mercury Music Prize has been announced.

In anticipation of the event, the feminist music mag Wears The Trousers this morning unveiled its own alternative shortlist, the Venus/no-penis prize, a comment on the Mercury’s chequered history, so far as shortlisting female performers is concerned. So chequered is this history in fact that the unprecedented shortlisting of 5 women for the prize in 2009 caused more ‘Let’s hear it for the girls!’ editorials and pant wetting on the part of male magazine editors than it would be possible to count… The reduced number of women this year, I assume, means a corresponding reduction in the subsequent editorials and pant wetting.

This years list is reckoned to be on the safe side, with Adele the bookies favourite, and previous winners Elbow and PJ Harvey also nominated, perhaps reflecting recession gloom. That said, it is being regarded as a ‘strong’ list so far as female nominees are concerned, but the list put together by the …Trousers makes for more intriguing reading. Neither list is without it’s faults, but you’ll learn more about music today by reading the …Trousers list. As with the Mercury Prize, the …Trousers writers intend to announce their winner on September 6th, alas without the £20,000 prize.

I wouldn’t miss it for the world…

(Picture shows post-Slutwalk graffitti on the side of Manchester University Students Union, July 2011. Image Authors own, Copyleft) Copyleft applies to image only in this instance)