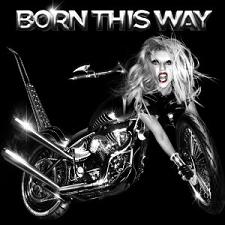 Released in the UK on 23 May, a mere 18 months after her previous album The Fame Monster, Born this Way marks a step forward from Gaga’s previous work, with a darker and more complex approach to her music. Born This Way retains the catchy dance-pop feel of The Fame and The Fame Monster, but with elements of more diverse musical genres and with much more melodrama and weirdness thrown in for good measure.

While her previous albums bordered on sounding samey, Born this Way has managed to include a greater diversity of sound, from ’80s pop rock in Electric Chapel, to German nightclub in Scheiße, to Latin-tinged dance song Americano, to country ballad in You and I. Her latest single The Edge of Glory provides an excellent climax to the album with its heavy electronica beats and fist-pumping melodies. There are plenty of weird moments too – a particular favourite of mine is Government Hooker, with its ethereal operatic opening making way for an assaultive industrial anthem (though my enjoyment of this song is marred by the fact that she chooses to sing trite lyrics such as “put your hands on me, John F Kennedy” rather than attempt to make any sort of political message).

(Read the rest of the review here…)