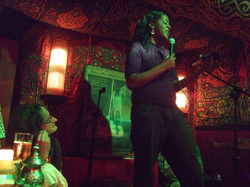 Funny for a girl: interview with Ava Vidal

Ava Vidal is a stand-up comedian who was the “only female finalist in the BBC 3 New Comedy Awards in the very first year of her career, she already has a clutch of TV appearances to her name, including the BBC’s Michael McIntyre Comedy Roadshow, Comedy Central’s The World Stands Up, Edinburgh and Beyond and C4 reality show Kings of Comedy”.

During the course of writing and researching a guest post for The F-Word about the representation of women in comedy, Vicky Brewster interviewed Ava Vidal about her experiences as a black woman in comedy:

Vicky: I’ve been processing a lot of statistics about how Mock the Week specifically stands amongst other panel shows in terms of the number of women it includes as guests, but also been looking at the history of Mock the Week, and the numbers of women in comedy in general.

Mock the Week, on their Twitter feed, firstly say that they will only really consider statistics regarding the female GUESTS that appear on their show, and not think about the exclusively male regular captains and presenter. Do you think the dynamic of the show would change much if they kept a woman on as a consistent regular ie, captain? It would be necessary for your suggestion of having a men vs. women show.

Ava: Mock the Week don’t have captains (haha!) It really depends who the female regular is. I know that isn’t very helpful but it’s true! Some women do comedy that relies heavily on female stereotypes, so that type of comic could turn the show in a way that many female fans may not like. If you look at Celebrity Juice that has two female regulars, Holly Willoughby and Fern Cotton, the jokes made are often lewd and sexual. On the other hand, there is a show in Australia that I have appeared on which is called ‘Good News Week’ that has a female captain, Claire Hooper and the balance is really great. But that is because of the type of comic she is and her chemistry with the male regulars. That can happen with male regulars too. Mock the Week has changed significantly now that Chris Addison is a regular compared to when Frankie Boyle was on the show. I prefer Chris’s style of comedy for the show but at the end of the day it’s subjective.

Vicky: Another comment the MTW twitter feed has made is that they believe that inviting more women to the show would be positive discrimination, and they’re not willing to go that route. I can’t speak for how many women they invite against how many agree to appear, but at the moment their figures are not proportionally representative, by either their figures of women working in comedy or mine. Do you think asking more women to join the show would be positive discrimination?

Ava: I have seen comments from female comics that say they wouldn’t want to be asked onto the show simply because they are a woman yet also complain about a lack of opportunity. I often hear comments like “I don’t want to be known as a female comedian, just a comedian.”

So I guess I am different in that respect as I have no problem whatsoever being known as a black female comedian!

I think when people think of positive discrimination they believe that what happens is somebody qualified is overlooked in favour of someone that isn’t. I have always understood it to mean that if you have two people equally qualified for a position you have a responsibility to take a certain amount of people from a group that may be badly underrepresented. I personally don’t have a problem with that but it’s not up to me!

Vicky: Surveying the number of women on Mock the Week since the series began shows a pretty consistent downward trend (Graph can be found here). As someone with more of an inside understanding of how Mock the Week recruit their guests, could you comment on why you think this is?

Ava: From my (limited) understanding about how MTW recruit, it depends on a couple of things. Firstly, how you cope at the live recording. It takes three hours to record an episode. It is relentless and the pace is very fast. Therefore, the people invited on the show are all professional comedians that have a certain amount of experience under their belt. If you are a guest you are walking in to a group of people that work together week after week and have built up a rapport. They are used to the way the others work and have learnt when to give way or jump in without annoying the other person. And they also don’t give way to you because you are new. You have to be able to fit in and do so quickly. If you sit there and say about three things during the recording session, then you are not going to give the editors much to work with. Some people’s style of comedy just doesn’t fit the show’s format. So that may be a reason why you wouldn’t be asked back. I also know some comics that absolutely hate the show and wouldn’t want to do it again!

The second thing that they look for is audience feedback. Even if you have a good show and the panel and the production team like you if the overwhelming response is negative they won’t book you again. And one of the realities you have to confront as a female comedian is that people will drag your sexuality into it whether it is negative or positive. You are ‘funny for a girl’ or ‘not funny cause you are a girl.’ And also you have to put up with these comments from other women too as I mentioned to you on Twitter! After my last appearance I remember a comment from another female saying that women should not do stand up. And that is one of the more polite comments! But such is life and you have to understand the nature of the oppressed!

There is a problem in the comedy industry. Many, many women want to do stand up and are present at the open spot level. And there are problems before you even get to the level of Mock the Week. If you go to a professional comedy night there will rarely ever be more than one woman on the bill. Some promoters just refuse point blank to book more than one at once. Some don’t mind but they are few and far between. Therefore there is already less opportunity. I was also discussing panel shows in general (apart from Mock the Week) with somebody else that works in comedy. A lot of these shows are happy to have male comedians but prefer to have female presenters instead of female comedians. And when that happens you are competing on a different level. Then all kinds of factors come into it such as the way that you look, age etc.

Ava can be found on twitter and her official website is www.avavidal.co.uk. The photograph is of Ava Vidal performing. It was taken by Isabelle and is used under a Creative Commons Licence.