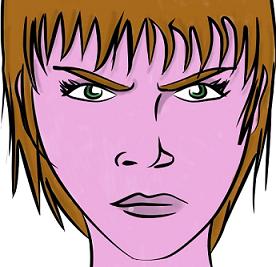 I was struck in compiling this music paste up by the way that the two videos I’d like to introduce you to, Eleanor Friedberger’s ‘Roosevelt Island’ and Thomas Tantrum’s ‘Sleep’ are both essentially angry in sentiment but in different ways. Friedberger being quietly scathing, Thomas Tantrum noisily unrepentent.

It’s also made me think about a very interesting article I encountered on Pitchfork last weekend, about the post riot grrrl generation of female musicians, and about those musicians being angry but not necessarily feeling that connected to riot grrrl, twenty years on. A really interesting read…

On a related theme, couldn’t help also thinking about the different ways in which the ‘Hell hath no fury like a woman scorned’ song has been handled over the years. What follows is the defining example by Carly Simon, and a more recent (and much more explicit) example by the Dresden Dolls…

Last year when I was busily working on my Punk Women series for the F-Word, I was interviewed by Jude Rogers of The Guardian on the theme of where have all the angry women in rock gone? I found it a very interesting, albeit terrifying, interview.

For one thing, there is the basic assumption that angry women only exist, music wise, in the area of rock music – we presumably don’t have angry pop stars because there is a credibility issue that goes with being mainstream and angry (ie people would assume you aren’t really meaning it, see Alanis Morrisette as a case in point) but also people don’t talk of angry dance music, angry urban music, angry folk music… Why is that? Why must anger be equated with an electric guitar? I can think of a number of quietly scathing, not to mention incandescent at times folk or country ish songs (Laura Cantrell’s ‘Conquerer’s Song’, Laura Veirs’ ‘Cannon Fodder’, Laura Marling ‘Your only doll’… Is it something about being called Laura?) not to mention the oblique Iraq war references in Broadcast’s weird electronica in ‘America’s Boy’, and I have to confess to being perhaps oddly attached to the scathing black humour of Nerina Pallot’s ‘Everybody’s going to war’, however pop it is.

One of the points I raised at the time, in a somewhat nervy garbled way, was that anger had gone into areas like folk, and that whilst someone like Laura Marling isn’t screaming in your face, she does display aspects of being angry. Just perhaps not noisily angry.

On the flipside, Florence + the machine’s ‘Kiss with a fist’ was incredibly noisy and violent, but was it an angry song?